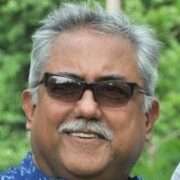 I met Priyanka Mathew for the first time in the early 2000s. She had just returned from a trip to Europe with a common friend. It was at a party – I can’t remember who was hosting it. Just like that Priyanka and I connected, talking about our lives and soon we became very good friends.

Going out to eat in Manhattan, for drinks, gossiping. I discovered so much of downtown New York City through her.

I was going through a tough time in my life and Priyanka would always listen to my sad stories. And then she would pour her heart out about her personal life.

One day she told me she was thinking of quitting her finance job and joining an art gallery in the Village. The Aicon Gallery was owned by the Dutta brothers. I knew them previously. And then I would often see her at the gallery – opening art shows, plus when SAJA and IAAC hosted events. Later Priyanka joined Sotheby’s and it would be lovely to see her at the pre-auction shows.

In the summer of 2006, she sent an email to a group of her friends asking if anyone wanted to travel with her to Cuba. I immediately raised my hand. I had been wanting to visit Havana ever since I had watched “Buena Vista Social Club.”

We went on the trip over Thanksgiving that year and it was the most amazing experience – the music, the food, the art, the museums.

Priyanka was a hit with men in Cuba. They would call her Bianca and she loved the attention. But then she would avoid getting friendly with them. When I would try to “save” her from the male attention and tell the men I was her boyfriend, they would say, ‘No way, you must be her father.’

I have so many wonderful memories of our Cuba trip. And sometimes it would get stressful. The one time when Priyanka tried to do some shopping and I scolded her since it was illegal for Americans to spend money in Cuba. She remarked saying she felt she was on a vacation with her husband and her father.

Later Priyanka also came with me and Geetanjali Misra to the Telluride Film Festival in Colorado.

We stayed close friends, but at some stage – for reasons I don’t know, we stopped meeting and communicating. I missed my friend, I couldn’t understand what had happened. But I never asked her.

I moved to India in 2016, but I followed her life through Facebook as she embarked on the journey to becoming a tango dancer. She always had this spirit to live and love life.

In May of this year, I made a short trip to New York because the New York Indian Film Festival was going to hold a physical screening of the documentary “The Beatles and India.” Suddenly I got a message from Priyanka on Facebook. She wanted to watch the film with me. I was thrilled to reconnect with my old friend.

But she also told me she had some good news and bad news to share. The bad news was she had cancer. I froze when I heard that and I didn’t know how to respond. The good news was that she wanted to get married.

We went out for dinner and she showed me her fabulous apartment in the West Village. And she posed for a picture in her back garden. And she even came for the screening where we took selfies.

On Sept 6, I wrote to her that I was in the U.S. and would see her after my trips to Toronto and Pittsburgh. She told me she was taking alternative treatment. When I asked her how she was doing, she wrote back “Still weak, but always time for you! Would love to see u!”

I am in Pittsburgh now. I had planned to see her next week in New York. But then yesterday afternoon I heard the news she was no more.

I have spent the last 12 hours looking at our pictures, thinking of her, and revisiting all the memories. I am numb.

But I wanted to write this to remember my friend and to share with you all how much she meant to me. For a while, she was my closet friend. There was nothing that we didn’t share. I learned so much from her, but the most important lesson was how to live a full life.

She was a beautiful human being, warm, caring and a lot of fun. I can still hear her voice. I will miss her a lot.

(Priyanka Mathew, the first South Asian auctioneer at Sotheby’s, died on Thursday after a battle with cancer. This is Aseem Chhabra’s Facebook post republished with permission)

Aseem Chhabra is a film critic and author based in New York City and New Delhi. His latest book is “Irrfan Khan: The Man, The Dreamer, The Star.”