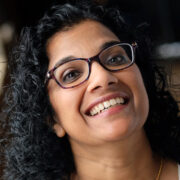 “In 40 years, if Sarojini is in a similar position as Kamala Harris, will you judge her candidacy by parsing out her ‘race?’”

I posted this question to Facebook last week because I am descended from the same regional caste community — Tamil Iyer — as Kamala Harris’ mother, Shyamala Gopalan Harris. My grandparents spent a few years living in Zambia under circumstances only slightly different from that of her parents. As toddlers, my siblings and I — all born in the U.S. within a decade of Kamala Harris’ birth — visited them there, much like Kamala Harris and her sister did. Also like Shyamala Gopalan Harris, as a 19-year-old college student, I was active in movements for justice. Like her, I earned my PhD and met my husband through that justice-oriented work.

The man that I married also does not share my ancestry. Similar to the man Shyamala Gopalan Harris married, he is a member of the African diaspora. Like Donald Harris, he is a Marxist who has remained continuously tied to the economic development of his country of origin. Like Donald Harris and Shyamala Gopalan Harris, Hindolo Pokawa and I chose to name our daughter after the lotus flower, whose emergence from dark waters we found meaningful and inspiring. Also like them, we chose to give our daughter her father’s surname (we chose a different path for her middle name). In both cases, our daughters’ last names do not mark them as being of South Asian ancestry, although — speaking only for my husband and myself — that was not part of the decision-making calculus. We are similarly raising our daughter in a community consisting largely but not exclusively of Black organizers active in the quest for racial, economic, and gender justice.

“Or will you consider what she did with her life and power in the intervening 40 years?” My Facebook post went on. To follow is my consideration of what Kamala Harris has done and proposes to do with her life and her power, according to her speech at the Democratic National Convention.

Kamala Harris pleasantly surprised me by focusing the introduction to her Vice Presidential acceptance speech on not just a generic message about equality, liberty, and justice from the perspective of both gender and race, but on the material effects those abstract concepts have on people living today. In addition to immediately racializing and gendering herself, Barack Obama, and Hillary Clinton, she named the intersectional oppression that Black women suffragettes experienced in being denied the right to vote and further in being denied credit and being erased from history. I’m sure her speech is unfortunately the first time many American citizens have heard the names of Mary Church Terrell, Mary McCleod Bethune, Fannie Lou Hamer, Diane Nash, Constance Baker Motley, and Shirley Chisholm. I applaud Harris for starting with the experience of Black women, and for honoring their resistance and intergenerational mentorship in relation not just to herself or even just to racially otherized Americans, but rather to all Americans — who Harris rightly said stand on their shoulders.

To start from a foundation of oppression is risky in a political speech, as it is in corporate boardrooms and social science research. It’s perceived as not objective — as aligning with “a side,” specifically, the side of “the other” relative to the presumably neutral state. Trump’s comments about “both sides” with respect to the white nationalists marching in Charlottesville illustrates this construction of a race war as opposed to the tension between oppression and justice. Instead, the warring two sides are the white, Christian state and “the other.” Harris’ strong ties to the African American community while growing up — stronger ties, in fact, than Barack Obama’s — were clear.

Having started with Black women’s organizing for the right to vote, Harris later referred to the Civil Rights movement and how it brought her Indian and Jamaican parents together. Here, Harris took another risk by acknowledging the importance of chosen community as well as community of birth and asserting the fluidity of identity — explicitly identifying as both Black and of Indian heritage. She credited her mother — and her mother’s chosen community — for her work toward justice. She honored women’s work and single motherhood, making special mention of the stress involved in homeschooling children during the current pandemic, in ways that suggest Harris knows these things intimately, despite having become a mother to two teenagers relatively late in life.

Harris managed this risk of identifying as the other by modulating the particularities of Asian otherness — perpetual foreignness — with references to “all-American” norms. Falling in love, for example, was characterized as “most American” — a distancing from the practice of arranged marriage that members of her maternal caste still engage in to preserve their social, economic, and cultural power. (Of course, her parents splitting was not associated with any specific nationality or culture).

In similar ways, Harris de-emphasized aspects of her maternal heritage that complicate her potential appeal not only to Black voters but also to many Indian American voters seeking to disavow the alien flavor of Asian otherness. While the word chithi — Tamil for auntie — was an inside joke uttered in code to Tamils, Harris referred more explicitly to the church choir without referring to the temple, although many news accounts describe her as having engaged with both houses of worship as a child. She imagined her mother “looking down” on her “from above.” While many Christian, Jewish, an Muslim Indians may believe in heaven, such directional references are not common or intuitive among those who believe in reincarnation and who honor their ancestors by literally feeding them on the anniversaries of their death as many of Harris’ maternal relatives presumably still do.

Finally, Harris noted the nation’s grief at the loss of certainty. Certainty in many regards is a sign of racialized privilege and accumulated wealth. Unlike the mother of a white child, for example, I cannot honestly tell my child that what happened to George Floyd will not happen to her, as she dreamt it did one night. When our family left the house in the middle of the night amid hovering helicopters and exploding tear gas canisters during Minneapolis’ uprising and white supremacist riots, I could not assure her that we would return to find her stuffies and trophies safe in our house the way that a mother living in a wealthy, white suburb might.

Most of the world, including most Americans, do not enjoy basic certainties like food, water, housing, healthcare, employment, education, transportation, technology, and personal and public safety. Unfortunately, this lack of certainty precedes Trump’s chaos, incompetence, and callousness. The elusiveness of basic certainty among Black and brown folks precariously surviving on the margins is structured into the organization of a cis-hetero-patriarchal, capitalistic, and white supremacist society. Without critiquing the concept of certainty as associated with privilege (and related to truancy, as discussed below) Harris alluded to this oppressive organization of society by naming the virus’ exacerbation of existing inequalities and racial disparities.

She listed many of what Tricia Rose refers to as the interlocking gears of structural racism and said the names of George Floyd and Breonna Taylor, acknowledging that there were too many more victims of the criminal justice system to name. Crediting her mother for instilling in her the need to take responsibility for the struggles of all people and acknowledging critical race theory’s distinction between intent and impact, she recognized the time and labor involved in organizing for justice. When she said that there is something happening all across the country, with people of all ages and colors and creeds taking to the streets, persuading family, rallying friends, organizing neighbors, and getting out the vote, I wondered if she was asking us to hold her team accountable.

Such a request seems prudent considering that nowhere was Harris’ speech more vacuous than when she referred to her running mate, Joe Biden — someone she had rightly previously accused of glorifying segregationists and supporting states’ rights to segregate. Someone whose stances she had rightly previously connected directly to her own ability to stand on the same stage with him — and to Barack Obama’s presidency — was hard to paint as an accomplice in the dismantling of state-structured racial stratification. Her speech was equally inscrutable when she tried to paint him also as an accomplice in the dismantling of violence against women.

Indeed, I wondered which presidential candidate she pictured in her mind’s eye when she said she can tell a predator when she sees one. She heralded Biden as a savior — a family man rather than a rapist and an author of legislation to fight violence against women rather than the silencer of Anita Hill. Harris’ invocation of Black women organizers is as ironic. Many of them would likely have opposed her belief in reforming rather than abolishing the police, as well as her criminalization of truancy while serving as San Francisco’s District Attorney.

Truancy is largely related to poverty and the cultural imperialism and settler-colonial hegemony of public education. We can only hope that Harris will use her complicated and contested identity — simultaneously the beneficiary and the victim of exploitation, extraction, and enslavement on both sides, like so many of us — to stimulate substantive discussion of the ways that food, water, housing, healthcare, employment, education, transportation, technology, and personal and public safety have interlocked over centuries to concentrate poverty and wealth along the artificial categories of race and caste.

Vidhya Shanker has a PhD in Evaluation Studies and an MA in Nonprofit Management, with a Secondary Concentration in Race, Class & Gender in Global Perspective, both from the University of Minnesota-Twin Cities. She has 25 years of experience working independently, with large institutions, and with grassroots organizations in the U.S. and internationally at the intersections of globalized capitalism, racialized poverty, and gender-based violence. Her dissertation research examined the construction of race in and through evaluation. Born and raised in the U.S. Midwest to immigrants from India, she now lives at the birthplace of the American Indian Movement, walking distance from the state-sponsored murder of George Floyd, in Minneapolis, Minnesota.