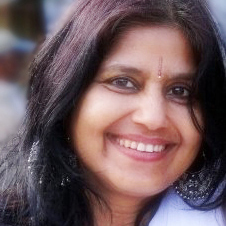 For several decades I have been working with women in India and the Indian diaspora and have gained strength from them in every walk of life. The first and foremost of them is my mother. She has shaped me, helped me sustain myself through many adversities, and has given me a sense of purpose in life.

I was born in a remote region in Odisha where my father served as a high school teacher; the third child, and the first girl in a family that had been daughter-less for three generations. We moved to Cuttack when I was a year old, but I  had a deep connection with my parents’ village.

I have fond memories of my mother managing a house full of people while raising five of us in Cuttack. My father was the first to graduate from college in his village and settle in the city. My mother raised her younger siblings, my father’s extended siblings, and many nephews and nieces who had moved with us for their education. In the 1970s, I do not remember ever having a meal at home with just us, the five siblings.

My mother was religious and would start her day bowing down to the Tulsi plant before approaching her little alter. For her, Tulsi was the feminine divine, the consort of Vishnu. I felt  privileged celebrating many Goddess-based feasts and festivals, namely Raja (swing festival); Kumar Purnima (the festival of the moon); a month-long festival of Khudurukuni (the celebration of mother Goddess), besides Goddess Saraswati and Lakshmi. I would ask my mother if I could try the festive food before offering it to the Goddess. She would say, “of course, children are gods first.”

She was the storyteller of these powerful Goddesses. They have remained with me to support me under so many adverse circumstances. My mother did not preclude me from doing anything because I was a girl and did not make me internalize gender inequity in a patriarchal society. I was never instructed about all the dos and don’ts to condition me for the next phase of my life as a woman. I thank my mother for that freedom.

My mother Ashalata (vine of hope) was born in a coastal village in Odisha in 1935. Her parents hoped to have a son after her. She was considered auspicious, and my uncle was born after her. Being married at the tender age of 11, she lived with her in-laws after reaching puberty two years later. I can imagine what she was thinking when her palki (the hand carriage) crossed the river Mahanadi transporting her from her natal home to her in-laws the year before India became independent. The famous Odia song sung by Akshaya Mohanty captures her sentiments.

Despite being a child herself, she had the immense responsibility of being the eldest daughter-in-law in the family. She had to endure lots of criticism from her in-laws, which must have left a deep scar on her sensitive mind. Adding insult to injury, she did not bear a child for six years after puberty. Those days, it was sensational news in the village that spread among all the relatives far and near. She became known as a barren woman. She was 18 when her first child was born, and by the time she was 24, she was a mother of five children.

After marriage, my mother discontinued her formal education, yet taught herself to read all the religious texts in Odia. My father finished his undergraduate education in Cuttack while she was living with her in-laws in the village. She had to cope with her terrible loneliness and isolation when her husband was away.

My college graduate father, the first to go to college and get a BA degree in that region in the 1940s, dreamed of educating his wife. Whenever he came to the village during his study breaks, he tried to coax her to study. But like Kasturba, Gandhi’s wife, she resisted any move to change her — perhaps she considered that an imposition and an attempt to remove a deficiency, putting a dent in her self-esteem. Now I realize that her defiance was away of coping with her identity in the face of all her struggles as a young daughter-in-law.She quietly supported my higher education. It was as if she knew that education was the only window to do well for myself and have a role more significant than confined to the domestic domain. When it was time for me to go to university far away from home, she was instrumental in supporting me. When I look back on my own life, my mother ensured that my fate would be different from hers, primarily due to my higher education.

My mother has had many struggles and faced tragedies in her life. She was barely 31 when she lost her youngest child, my little brother, who was only eight. She was widowed at 56 (my father died when he was only 64). Then in 1999, at the age of 64, came the severe blow of losing her 40-year-old son, her anchor. It was as though she became an orphan.

When my parents lost their eight-year-old son to rheumatism overnight, our lives turned upside down. I was in seventh grade and barely 11 years old. My mother lost her ground, the earth under her feet gave way, and she fell into a deep depression. She had always been very caring and loving, and I could not make sense of her depression. Unfortunately, society was not interested in making any sense of her plight at that time. Medical care was dismal. She was criticized for withdrawing from her duties towards her spouse and her four surviving children.

As a mother of two, now I realize how indescribably deep the loss of a child would be for a mother. No wonder, even though there are words for a husband losing his wife, a wife losing her husband, a child who loses a parent, there is not even a word for the mother who loses her child.Those days, I remember one incident. One morning I saw her treating a wounded street dog who was left almost dead with a slain neck. For three days and nights, she made a fire and used the heat pad and he survived. Her suffering made her empathize with the pain inflicted even on non -human beings.

When I look back, my mother, in overcoming her helplessness and suffering, through her defiance and resilience, taught me to be strong, independent, be prepared to challenge the norms, and stand up to injustices showered upon the marginalized. Her deep love for all things and beings has made me appreciate the value of every life, including animals and plants.She was instrumental in promoting my education and in making me what I have become today.She would be sitting with me night after night when I got panic attacks before my exam. What was she thinking then? What was her dream for me? What did she want to see in my future compared to her own? Today, reflecting on my life, I thank my mother for her resolve and her foresight in carefully crafting my identity as a mother, career woman, social activist, and in her own words, “a good daughter.”

After my father died, my mother lived with me for seven years here in California. She missed her familiar networking and being a dependent bothered her. After her grandsons went to college, she was thrilled to go back to her home in Cuttack.

She is 86 now and lives with two attendants in her home in Cuttack. She greets me “Koti Koti Ayush heu” (live a million years!) when I call, no matter what time of the day or night. “Khaichu (have you eaten)”? Every day the sequence of the questions remains the same. Then she will worry about the whole world relating to me.

As we all know, there was nothing like Mother’s Day while I was growing up. I don’t remember a single time I ever thanked my mother or she expected me to. I vividly remember every day she waited for me to have her meal. Sometimes if I was gone even for a whole day, she would be waiting. I used to be so upset! Whenever I threw my frustration, she would smile and tell me, “you will not understand until you become a mother.” Now when I am,  I fully realize what she meant. Love you, Bou!

Annapurna Devi Pandey teaches Cultural Anthropology at the University of California, Santa Cruz. She holds a Ph.D. in sociology from Jawaharlal Nehru University, New Delhi, and was a postdoctoral fellow in social anthropology at Cambridge University, U.K. Her current research interests include diaspora studies, South Asian religions, and immigrant women’s identity making in the diaspora in California. In 2017-18 she received a Fulbright scholarship for field work in India. Dr. Pandey is also an accomplished documentary filmmaker. Her 2018 award-winning documentary “Road to Zuni,” dealt with the importance of oral traditions among Native Americans.