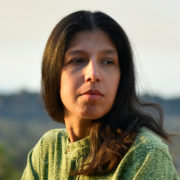 In the last 2 1/2 years, I have learned about the privilege of living with unparalleled access to hikes, beaches, produce, and good weather. For that, I am thankful. I’ve also learned that it has come at the cost of being racially profiled, doubted, and humiliated on more than one occasion.

I’m 40, and I’ve lived in the U.S. for 19 years, landing first in Ohio, where I spent six years. I then lived in New York City for a decade, where everyone came from a unique space-time continuum. I crossed paths with ‘different’ so often that same-same-different wasn’t just a theory; it was a proven fact. In 2017, I arrived in Santa Barbara, Calif., and for the first time, I was confronted with a stark reality; that the “freedom” to live proudly as a dark-skinned Indian woman was one I took for granted.

As an artist, identity has been central to my studio practice. For the last decade, I’ve photographed and recorded the voices of many Americans and immigrants and documented their controversial narratives. This letter is about me finally coming to terms with racism in America at a deeply personal level. I owe my bravery and honesty to the chilling murder of George Floyd.

It is June 7, 2020, and we are living in the time of a Pandemic. After being cooped up forever, a peaceful Sunday morning at the beach made everything feel marginally better. I was on the phone with a friend, pacing back and forth on the sidewalk outside my legally parked car in downtown Santa Barbara. My husband was grabbing tacos as I watched over my two daughters through the car window. They were in their bathing suits, blissfully singing along to their favorite songs. What could go wrong?

“Those kids are in a really hot car!” An older white woman screamed from above, interrupting my bubble of temporary contentment. Indian culture places a great deal of trust on the elders of the community, so I gave her the benefit of the doubt. I assured her that the kids were having a ball, and she needn’t be worried, and then came the threat. She looked square in my face and said, “If you don’t move your car under that tree’s shade, I’ll call the cops on you.”

I felt stunned and confused, but despite her hostility and entitled tone of interrogation, I set aside my disappointment and conjured up the best smile I could. In response, a deadpan glassy stare cut right through me. In my half-minute long staring contest with this stranger — who stood on the 3rd floor of a sunlit balcony — the hierarchy couldn’t be more obvious. Was she even looking at me? As an active member of this community, I have proudly kneaded my sincerity into the fabric of this town. However, I thought to myself; maybe she couldn’t hear me? Maybe she has some other impairment? Maybe… I’m in denial.

“The children are safe, and the air is on, I am looking at them right now, they are happy. Do you need them to come outside and give you proof?”, I tried to convince her again. “Is there an adult inside that car?” she asked angrily. As she continued to look down upon me with unfounded disdain, I was reminded again that I am the “other.” Having befriended so many considerate and caring people in America, it’s easy to identify those who choose to communicate with indignity. It wasn’t until I pulled my eight-year-old light-skinned daughter out and announced that I was her mother that she backed away.

As my supportive white friend theorized, she probably thought I was the help, a nanny that “needs” reprimanding. Later that night, my mixed-race daughter confessed that she was afraid to go to sleep because someone might call the police on her mother for no reason. “Did she yell at mama because she is brown?”, she asked my white husband. What makes me livid is that my daughter saw me put in a position where my intelligence and pride were challenged, and the first emotion she felt from it was “fear.”

This is not my only experience in this town. First, it was the condescending pediatrician, then the insulting schoolteacher and now this stranger on the street. In each previous case, I swept my tension-filled interactions under the rug, but I owe myself the respect to not stay silent any longer. I am good enough to be a community leader and sit on multiple boards, yet every few months, an encounter like this is a harsh and rotten reminder. Othering is so deeply embedded in our society that its recognition lies outside the consciousness of many well-intentioned white people. We are at an unprecedented point in history, and we cannot dismiss such confrontations and call them “a few bad apples.”

Even as I write this essay, I check my own privilege. My problems feel inferior when compared to the long list of lives lost to racism. However, as my black friend wisely stated, if these types of put-downs remain unspoken, they can have severe physical and psychological implications. These subtle insults may feel unconscious at first, but they are derogatory, demeaning, and detrimental. I cannot let these stories fester within me and destroy my sense of community. To combat this racial disparity head-on, and in honor of every protester that marches for justice, I need to make the “invisible” visible. The onus is on all of us on how we repair our country. I’m going to do my part by not internalizing my experiences.

More than ever, it’s time to listen to those who entrust you with their piece of oral history; it starts here. Please ask yourself: Do you fluidly include people of color in your social fabric? ​Does their color, accent, sexual orientation, socio-economic status stop you from inviting them in? ​Do you create space for them to express themselves? Negating and nullifying someone’s experiential reality and excusing the oppressor’s behavior is called a Microinvalidation. It is perhaps the most lethal of all microaggressions often delivered by those closest to you. There is a sophisticated layer of folks within our educated society that are blind or defensive towards their inherent bias. The crusade is not out there, it’s in our backyards. If there was ever a time to stop and challenge that one friend who said things that stunned you, but you stayed silent, it is now.

I implore you to please ask yourself these questions. Until you do, I will continue to feel threatened in a place that I call home. Until you examine your own behavior, strangers will feel entitled to call the cops based on their biases. Once these cops arrive whose story do you think they are motivated to believe? And then that day comes when you watch a video with a white police officer pressing his knee into a black man’s neck for 8 minutes and 46 seconds until he dies, and you’re left wondering, “how did it get so bad?”

Manjari Sharma, born and raised in India, makes work rooted in portraiture addressing issues of identity, multiculturalism, and personal mythology. Manjari’s work has been awarded, published, and exhibited internationally and her series Darshan has garnered her wide critical acclaim. Manjari has been recognized in print and online by The New York Times, Vice Magazine, Monocle, Geo, The New Yorker, Wired, CNN, LA Times, and NPR amongst others. She lectures and teaches at a multitude of institutions, and her work is in the permanent collection of the MET, Museum of Fine Arts, Houston, and The Carlos Museum amongst various private collections.  Instagram @manjee