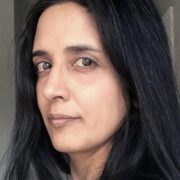 Beyond Biometrics: The Struggle for H-4 Dependent Visa Renewals During the Pandemic

Standing at a podium in a socially distanced auditorium in Milwaukee and flanked by American flags, Kamala Harris, a shining daughter of this nation, accepted the nomination to be Joe Biden’s running mate and Vice President of the United States for the Democratic Party. Given President Trump’s recent shenanigans involving the United States Postal Service, it’s not at all surprising that Harris initiated her acceptance by identifying the critical role of voting in a democracy. As she very rightly pointed out, to vote is to speak and to create political change if that, indeed, is the will of the electorate as expressed in a fair and transparent election. Though Kamala did not address Trump directly, her intent was clear: she believes that her role as a public servant is to enable and ensure the rights of the American people under the laws of our democracy.

Very refreshing to say the least since that is what stating the obvious has become. Kamala continued to underscore her unique ability to strengthen the institutions of our democracy by telling her personal story which focused on family, and, in particular, her mother. It was interesting to note that Kamala said that she identifies as a black woman of Indian heritage. That is, she did not say that she identifies as a South-Asian woman. It made me wonder two things: the first was how a biracial person makes the decision to identify pre-dominantly with the race of one parent or the other. After all, Barack Obama did the same in identifying himself as a black man even though his mother was white. The second thing I thought about was Kamala’s mother’s relationship to her own identity as an Indian woman.

Shyamala Gopalan Harris’ arrival in the United States preceded by a decade the first wave of Indian immigrants to the U.S. in the late 1960s. I can only infer that this woman, Indian, educated, scientist, activist, married and divorced to a Jamaican man, single-mother in the mid-60s was ahead of her time. It was clear from Kamala’s speech that Shyamala, the iconoclast, was an icon for her daughter. And, it made me think of the great women which America forges and then how those great women then go to work to create ‘a more perfect union.’ Though Kamala recognized August 19th as  the 100th anniversary  of the 19th amendment giving women the right to vote, she also recognized that the disenfranchisement of black women continued and continues which brought her to the linchpin of her policy framework: if government does not work for black women and is not inclusive of black women then, it doesn’t work.

So, what did black women disenfranchised from the vote do? Kamala told us that they organized. They protested. With this statement Kamala tacitly acknowledged not only the fundamental right of Americans to protest under the First Amendment but, equally important, that the collective action that we are currently engaged in creates change. We know this but sometimes it is difficult to see that at any given moment we are, indeed, participating in an arc of social action which is greater than any one of us. It is for this reason that we need our leaders who have the executive view to tell us that the action we are taking is working. Now that Kamala has a platform from which to speak, she has made it clear that not only will she use it to give us feedback on our action and its efficacy to secure our democracy against the ravages of Trump’s authoritarianism until the election, she is fighting alongside us.

Trump’s ‘Make America Great Again’ is a movement that seeks to recover an unrecoverable past. It is nostalgic to the point of unreason, lunacy and insanity because you cannot make time stand still or go backwards. For Trump, greatness is code for whiteness. Trump supporters seek to return to a time before ‘blending’ — the blending of race, the blending of families, the blending of values. Trump’s strategies of blocking, withholding, negating, dominating and destroying are the tactics of a man and a movement who have a problem with blending. Kamala, on the other hand, represents an apotheosis of blending which is why Trump hates her. His birther invectives against Kamala’s citizenship because she is the child of immigrants is even more ludicrous the second time around. Kamala has no fear because she has been schooled in the law. Trump’s encounter with Kamala will be nothing less than epic.

Kamala said the words ‘structural racism.’ Do I have to define it? We live with a form of race-based capitalism which is brutal and morally wrong. There is no reason why we must have an underclass obscured in the shadow of our enormous mountain of wealth, which is overworked, over-extended, under-paid, under-insured, under-educated and without access to an exit. It is not communism or socialism to declare that every American deserves to have access to quality health care, a quality education and a living wage, at the very least. Kamala is aligned with these ideals of the Democratic Party. She used her office as Attorney General to fight Goliath. How do we know that she is sincere? She mentioned how ‘service to others gives life meaning.’ Only someone who has done this, a person who has lived a life sourced in mobilizing empathy in order to uplift other people, says something like this. That is, the point of life is not some arbitrary material standard. The point of life is meaning itself.

The other way we know that Kamala understands that to become Vice President is to serve the people is in her warmth, her smile and in the happiness she exudes. I observed to myself recently that I have never seen Trump, Melania, his kids, anyone in his cabinet, anyone he has worked with or fired, anyone he has associated with – happy. After 3.5 years of Trump’s sourpuss face, it’s Kamala’s happiness that is so remarkable to experience and behold. Can you imagine? To have labored under Trump all these months trying to make sense of anything that he does and to have forgotten that our political leaders can be happy? That they can be witty, laugh, look with love and wonder at each other? We, the American people, deserve this. A return to normalcy. A return to civility. A return to the happiness which has as its source the equality of all people in our always becoming ‘more perfect union.’

Gitanjali Kapila is Adjunct Assistant Professor at the School of the Art Institute in Film, Video, New Media and Animation and an adjunct lecturer at Columbia College, Chicago. She received an MFA in Filmmaking from Columbia University. She teaches foundational courses in film production as well as beginning and advanced courses in screenwriting and world-building. Her short film Breathing above the Treeline recently completed its festival run with 14 screenings world-wide including in Europe, India, China and the U.S. She is currently in post-production on a new dramatic short, Bat, for which she received an Illinois Arts Council Grant and a grant from the School of the Art Institute. In October 2019 she presented on writing for viewer interactive episodic narrative at the CILECT Congress 2019 in Moscow. She also published her second academic article in May 2020 which explores the intersection of race and the hero’s journey. She recently optioned her Christmas comedy feature Sandra Claus to an LA-based producing team.