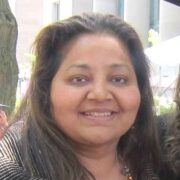 We didn’t hit it off right away. When she was a judge on the D.C. circuit, she interviewed me during my second year of law school in 1988 for a clerkship — and rejected me, following a somewhat awkward interview all around.*

I went on to clerk for Hon. James L. Oakes,  Chief Judge of the U.S. Court of Appeals for the Second Circuit, and then US Supreme Court Justice John Paul Stevens. There were almost no Indian Americans in the law or in public service on the national scene at the time (most started coming to age about 5-10 years later), and I didn’t have a language for my experiences or a peer group of contemporaries that shared them, especially having grown up in Nebraska.

She and I re-connected a few years later in the early 1990s and she encouraged me to begin uncovering my voice as a woman lawyer, as an Indian American, and as a person of spirituality and faith not of the dominant tradition. (That began Round 1 of the process of uncovering voice — more coming in its own time.)

She has been a mentor and friend ever since, always available, for the past 25+ years.  We met frequently when she visited NYC.  When I went back to D.C. from 2008-2012 for the Obama years, she was a neighbor in the Watergate complex.  She hosted (at my request, and along with Justice Stevens and 2 other justices) the first-ever reception at the U.S. Supreme Court in 1995 for the then just-formed Indian American Bar Association, now a huge and sprawling South Asian American Bar Association, from which I was honored to receive its Pioneer Award some years ago.

That’s the first picture included here (from the reception she graciously agreed to host at the Supreme Court for the fledgling Indian American bar association in 1995).  In 2001, when I first argued a case in the U.S. Supreme Court as New York State Solicitor General — and, as it turned out and we only later discovered, became the first South Asian American, woman or man, to do so — she was there with a beaming smile and an ever-so-subtle air hug. And in 2003 or so, she graciously accepted my request to accept an invitation by the University of Nebraska College of Law to speak in Lincoln, a visit that she made in 2006, while I was living in NYC.

In 2004, we both got to celebrate her heritage in Newport, Rhode Island at the Touro Synagogue, the oldest synagogue in North America.  I was chair of the U.S. Commission on International Religious Freedom and a law firm partner in NYC at the time and we both spoke at an event celebrating religious freedom in America.

The event was marked by the annual reading of George Washington’s Letter to the Hebrew Congregation of Newport in 1790, in which Washington wrote:  “It is now no more that toleration is spoken of as if it were the indulgence of one class of people that another enjoyed the exercise of their inherent natural rights, for, happily, the Government of the United States, which gives to bigotry no sanction, to persecution no assistance, requires only that they who live under its protection should demean themselves as good citizens in giving it on all occasions their effectual support.”

When I more recently stepped away from the law to experiment anew and find my true voice with respect to different approaches to inner and outer transformation and social change (still ongoing), she was a steadfast mentor, quiet cheerleader, and friend — and, as always, a valued conversation partner.

I saw her last in July 2019, at Justice Stevens’ funeral, when I first came to know she was quite ill.  The public announcement of the recurrence of her cancer happened a month or so later.  The second picture is one I took at the Stevens’ family private luncheon following his funeral in July 2019, where she was my table-mate and is standing with Chief Judge Robert Katzmann of the U.S. Court of Appeals for the Second Circuit, who is another dear friend — and, perhaps most amazingly, is the luminary successor to Judge Oakes, for whom I had initially clerked in lieu of RBG.

May she rest in peace.

*And another full circle note: a large part of the awkwardness of the interview in my second year of law school was that I had rescheduled it — which unknowingly to me (at the time) was a huge faux pas in the clerkship world. And I had rescheduled it because my dear niece and god-daughter Alyssa Martin, also now a talented young lawyer and changemaker, was born in March 1988 and I changed plans to make the interview a stopover in DC from Boston on my way down to meet baby Alyssa for the first time in Houston. I’m sure RBG would have thought this a good excuse, but we never got there in our initial conversation and I never told her the reason — the meeting was awkward from the start, no doubt because I must have somehow mishandled the whole thing.  Anyway, the circle of life carries on with Alyssa and others, as we seek for these times new manifestations of timeless values. She was truly one of a kind.

Preeta D. Bansal is an American lawyer who served as the General Counsel and Senior Policy Advisor to the federal Office of Management and Budget from 2009 until 2011. Prior to her work in the Obama administration, she served as a law partner at Skadden, Arps, Slate, Meagher & Flom and as the Solicitor General of the State of New York. She also has been a member and past chair of the United States Commission on International Religious Freedom. She advised on the drafting of the Iraqi and Afghan constitutions. She is currently a independent corporate director of a public corporation (NYSE: NNI), a Lecturer at MIT, and a full-time volunteer global anchor for ServiceSpace, an ecosystem that draws upon network science, emerging technologies, and the deep work of inner transformation to cultivate a social field and a new global social architecture that nurtures, harnesses, connects, and weaves together the ripples that flow from small, locally grounded, and deeply cultivated individual acts of service, kindness, generosity, compassion, and love that flow from inner stillness – an architecture that aims to ignite and amplify small shifts in individual and collective consciousness via network effects.  “Change yourself. Change the world.” is ServiceSpace’s central ethos.