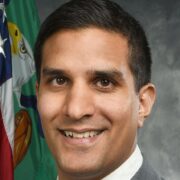 My story is the story of so many other Indian Americans. In search of a better life for their kids – and maybe a bit of adventure for themselves – my parents left India for America in the 1970s. I was born in Maryland, spent a few years in Chicago, and settled in North Carolina when I was about seven years old.

I’ve always described my childhood as a happy one. Surrounded by a loving family, I felt like I was part of something bigger than myself, and that my life meant something to those around me. I also felt enormous pride and gratitude in being an American – having the freedom to find and become my authentic self, and the opportunity to dream big, even if in my case these were mostly athletic delusions.

At a young age, I also knew that we were different. I remember on the first day we arrived in Raleigh, our apartment was filled with unopened boxes. But instead of unpacking, my parents grabbed the phone book, found three Indian-sounding last names, and invited them over for dinner. All of them arrived within hours and, from that point on, we probably shared at least one weekend meal within the Indian community until I went away for college.

As I got older, I began to understand how much these gatherings meant. Like anyone else, my parents wanted a space where their traditions and beliefs were accepted, and that hadn’t always been their experience. When he first moved to the U.S., my dad – a turbaned Sikh – was told by his boss: if he wanted to keep his job, he’d need to fit in better. So that’s what my dad did – he sacrificed part of his identity to provide for his family. Meanwhile, my mom worked for the Raleigh city government, and I’ll never forget her coming home in tears after her boss openly bragged that he was a member of the KKK. He made sure to remind her of that throughout her years of dedicated but painful service in Raleigh city government.

I also wanted to feel accepted, but for that to happen as a kid it sometimes involved compromises that I now regret. I remember feeling dread in middle school whenever we’d have a substitute teacher, knowing they would butcher my name, and giving the whole class a good laugh at my expense. Sometimes I thought the solution was to just own it, so I’d speak during class with a thick Indian accent. When I think about that now, I’m ashamed. I made a joke out of my family’s background to deal with my own insecurity about being different.

Fast forwarding to the past few years, the rise in hateful attacks against Asian Americans and other communities of color made me realize that I was still carrying a lot of memories – painful ones – that felt heavier over the years. I’d almost forgotten the humiliation of getting beat up on the back of an elementary school bus for being the “dirty brown kid with smelly food,” or what it felt like to get told I couldn’t go on a date with someone in high school because I’m brown.

Much of the reason I’d been able to let these memories go was my deeply held belief that things were getting better when it came to race; that my kids would grow up in a different way. So I’ll admit, the slow progress and setbacks left me angry at times. I suspect many in the Indian American community feel the same way: we’re tired of watching the past repeat itself, and we’re exhausted from being quiet.

But to make change, we first have to recognize that we can all do better, myself included. That means being real about my own privilege as an Indian American from a middle-class household. I’m not at risk of being stopped and frisked. My wife and I don’t have to teach our kids how to survive if they get pulled over by the police. For those of us who’ve faced prejudice, we also need to check own our bias, and see our own privileges, if we’re going to do better.

It also means we need to speak out and do our part if we’re going to be seen as 100%, full-fledged, just-like-you citizens. As an Asian American, I’m deeply humbled and honored to have the privilege of serving in President Biden’s administration at a defining moment in our country’s history, while being a part of the most diverse administration ever assembled. My experience serving our country bears no resemblance to my mom’s days in Raleigh city government, but her experience back then, and recent violence toward Asian Americans, are a constant reminder to me about the responsibility I have of representing and standing up for the AAPI community every day in this job.

An Open Letter to Modi Bhakts in America: Your God has Feet of Clay and Blood on His Hands

My role at the White House is to help create a self-reinforcing dynamic between domestic renewal, American leadership abroad, and national security. Part of domestic renewal has to do with economics: creating sustained and inclusive growth in jobs and wages, boosting the resilience of our critical supply chains, and strengthening our innovative edge. Another part of domestic renewal involves healing the wounds of racial injustice and coming together as a society to deliver on American’s unmatched promise. I don’t have direct policy responsibility in this area, but it’s central to what President Biden is trying to deliver, and a big reason why I’m here.

As a final thought, I want to use this platform to send love and support to my sisters and brothers in the Sikh community who have been a particular target of harassment, racism, and violence in recent years. I stand with them today and always.

(This article was originally published on whitehouse.gov.)

Daleep Singh is the Deputy National Security Advisor in the Biden Administration.