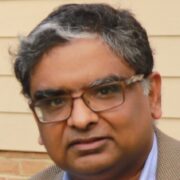 Growing up in India, I looked upon American democracy as an ideal for other younger democracies to follow. After immigrating and looking at U.S. democracy in action, my admiration only deepened. I discovered that elections (for all levels of government) are essentially run by local and state board of elections, these are almost always bipartisan, any differences in process are resolved through debate and discussion. Debate can be acrimonious, and election disputes are sometimes settled by courts, but no politician of any stripe has ever called out the U.S. election process a sham and a fraudulent exercise, in its entirety. No one, until Donald Trump, that is.

It is a matter of national shame that he repeated this false and self-serving claim in the first Presidential Debate which was seen across the world. For this and this reason alone, voters (and Indian American voters particularly) should reject him at the polls in November. The U.S., which used to send poll observers to other fledgling democracies and provide technical help in running elections, is no longer seen as the leader in promoting democracy.

But what about his other attacks on democratic institutions and long held traditions? Donald Trump’s campaign agreed to certain rules in the first debate (rules set by the Commission on Presidential Debates) and then the candidate proceeded to rip apart those rules. This is not merely a matter of being rude or uncivil in a televised debate; it showed to any fair-minded voter that Trump does not believe in any rules, which cramp his bullying and hectoring style.

In the end, this election should be about character and values. It should be about which candidate will restore the vital institutions which underpin American democracy. American Democracy depends not only on the integrity of the election process (and the public’s faith in it), but also the rule of law, and the representation of the most underserved and vulnerable Americans.

In the debate, the contrast between the candidates was clear. Joe Biden agreed to abide by the results of the election, Donald Trump did not. Joe Biden condemned racist violent groups, Trump hedged and actually asked the Proud Boys to “…stand back and stand by…” Joe Biden reaffirmed that he would reinstate the Affordable Care Act, Donald Trump acknowledged that he had dismantled part of the Act, but had no alternative plan. On COVID and public health, Joe Biden emphasized that he would heed the advice of scientists and health professionals; Donald Trump mocked Joe Biden for wearing a mask, and most of his entourage did not wear masks at the debate event, even after being told so by the Cleveland Clinic staff.

As subsequent events unfolded, we all learned that the Trump White House had endangered top Republican leadership and his own staff by holding a mask-less event, with no social distancing during the introduction of his Supreme Court nominee, Judge Amy Coney Barrett, three days prior to the debate. We now know that Donald Trump, many of his staff and two Senators have contracted COVID, most likely at this super spreader event. After being admitted at Walter Reed, Donald Trump has continued doing political theater, by releasing staged photographs and video messages and by staging a car ride, while waving to his dwindling band of supporters outside the hospital.

Rom-Cons: This Valentine’s Day Please Think Before You Swipe Right

Indian American voters must think of issues that will impact them and their sons and daughters and grandchildren. The debate and subsequent events have clearly shown that the incumbent president had nothing to offer on the issues vital for the Indian American voters. A botched response to COVID means that small businesses will continue to have a hard year or two, more restrictive immigration policies means family visas would take a long time to come. In contrast, the Democratic party candidate’s plan is to tackle COVID by following scientific consensus, to offer additional help for small businesses and bring in a compassionate immigration policy. The plan also offers free tuition at state universities to families making less than $125,000.

What about India specific policies? Although the debate topics did not include foreign policy topics, Donald Trump made two very unflattering claims about India: that India is not reporting COVID deaths accurately, clubbing India with Russia and China and that India is a big producer of green-house gases emissions and cannot be persuaded to reduce such emissions. Indian American voters, who care about the U.S. policy stance towards India, should take the hint and understand that Donald Trump is for Donald Trump alone, and for him surviving this election is paramount, given the looming tax and financial fraud litigation that may haunt him in the coming years.

Sonal Singh is a banking risk professional and emigrated to the United States in 1998. He lives and works in Cary, North Carolina, the best little town on the Eastern Seaboard.