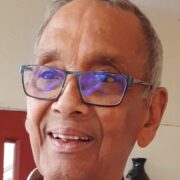 “United be your purpose, harmonious be your feelings, collected be your mind, in the same way as all the various aspects of the universe exist in togetherness, wholeness.”

We, Hindus, whether we live in India or elsewhere, are proud of our religion — and rightly so. The average Hindu’s pride does not necessarily stem from any deep understanding of the teachings of his religion or its philosophy, or familiarity with the richness of its vast wealth of scriptural texts. It is just that the average Hindu, like the average anyone born into any religion, is never troubled by any cracks in his conviction that ‘his’ sect, community or faith is anything but the best and truest.

I am no exception. As the last of six siblings in a family that took its religion seriously but was not overly insistent about children being subjected to the rigors of strict orthodoxy, my upbringing was no different from that of most of my contemporaries in the village. By the time I was seven or eight, I was, like most Hindu children, familiar with many of the stories in the major epics, the hierarchy of the Hindu pantheon and the basics of the moral values associated with Hinduism. For example, one thing I vividly remember is the repeated insistence that I should never lie. Like most others, I learned the convenience of the occasional lie all by myself.

The fact that I studied Sanskrit as a subject for six of my ten years at the village school has had and continues to have a significant impact on my life. I was fascinated by the language and remain hooked on it even today and, although I have made several attempts over the years to continue learning Sanskrit, I have made but limited progress. However, even my limited knowledge of the language has been a major factor in my efforts to gain some insight into the essence of what my religion teaches as it helps me try and read the original texts, albeit laboriously.

Later, while working in Delhi, I was persuaded by a colleague to join him to listen to a talk at the Ramakrishna Mission. Although I went rather reluctantly, I came back enthralled by the lecture on Vedanta given by Swami Ranganathananda. During the rest of my five-year stay in Delhi, I don’t think I missed a single one of his talks. My curiosity about India’s spiritual tradition, kindled by those talks, has stayed with me ever since.

From 1960, but for two short stints in Delhi, I lived and worked outside India for over 40 years. My continuous stay in India for the last 21 years after retirement has given me the opportunity to gain much more awareness than I was exposed to about my country, my faith, my various community identities and the cultural and spiritual traditions I am heir to.

I tell myself frequently that, unlike most other major organized faith systems, Hinduism, as it has come down to us, has evolved over millennia, its holy books having been added to several times by authors known and unknown through this vast time span. What is perhaps even more important is that this evolution is a continuing process. In the 6th century BC, as we all have learned in our school history textbooks, the two great saints and reformers, Gautama Buddha and Vardhamana Mahavira lived and preached their revolutionary spiritual messages.

While both Buddhism and Jainism have lived through the centuries to this day as faith systems that are distinct from Hinduism and have occasionally come into conflict with Hinduism, both have immensely influenced Hindu thought and practices and today are not seen by Hindus as antithetical to Hinduism. Indeed, the Buddha has been claimed by Hinduism as its own by being made one of the ten incarnations of Mahavishnu replacing Balarama!

More recently, in the 8th century AD, was born one of the best-known Hindu thinkers and philosophers, Shri Shankara. Endowed with a brilliant mind, this young sanyasi, who passed away at the age of 32, codified the essence of Hinduism in an elegant package that wove speculative philosophy with deep-felt spiritualism and disciplined rationalism. As was to be expected, subsequent Hindu saint-philosophers, equally revered by Hindus, such as Shri Madhava and Shri Ramanuja, have challenged certain core aspects of Shri Shankara’s Advaita philosophy and, in the process, further enriched the treasure chest of Hindu spiritual thought.

Yet another, even more, recent saint-philosopher who had a significant impact in Hindu spiritualism was Guru Nanak. Sikhism remains a distinct faith system but shares much with Hindu thought and practices.

Hindu religious thought and teachings have never been static. Through recent times, coming right up to the 19th and 20th centuries, we have seen several revolutionary spiritual movements led by saints and philosophers such as Shri Ramakrishna and Swami Vivekananda, Ramana Maharshi, Shirdi Saibaba, Kabir and quite a few others.

I have recalled all these well-known facts relating to the history of the evolving thoughts of Hinduism mainly to point out that Hinduism has never been frozen into a lifeless dogma, never has been exclusivist — Nanak, Kabir and the Shirdi Saint to cite the obvious ones who, in the not too distant past, highlighted the inclusive perspective — all had a liberal, syncretic approach not only to spiritualism but also to the more pragmatic world of human relations. Inclusiveness has been the one unbroken constant in mainstream Hindu thought.

And the evolutionary process continues. The 19th century saw the birth of a new strand in this living, moving organism we call Hinduism. The defining characteristic of this new movement is the explicit abandonment of inclusiveness. I was tempted to qualify the word ‘abandonment’ with the adjective ‘unprecedented,’ but I could be horribly wrong in doing so. I just do not know. To my knowledge, however, it seems a very ‘un-Hindu’ way of looking at the community of mankind.

When you mention the word ‘Hindu’ or ‘Hinduism,’ they often elicit from the ‘knowing’ the retort that these are foreign words of uncertain origin and imprecise meaning. The ancient religious tradition of India, they knowingly point out, is Sanatana Dharma. But I shall not waste my time on shallow semantic exercises. To me, Hinduism is a ‘foreign’ but commonly understood word which identifies the same thought system as Sanatana Dharma. I am a learner still, so I may be wrong.

Going back to the still-unfolding latest development in Hinduism’s evolutionary process, another distinguishing feature of this process is that its prophets are not cast in the traditional image of India’s spiritual leaders and savants. The new crop of evangelists is very much part of the rough and tumble of the mundane, material world of political competition to win the heart and mind of the ordinary citizen in the shape of electoral votes. One often hears the aphorism that Hinduism is not just a religion but a way of life. It is this undeniably true nature of Hinduism that enables the new movement to take the evolution of Hindu thought forward — and in a very unlikely, unexpected direction.

Going back to the new phase in Hinduism’s evolutionary process, unlike Advaita, Dwaita and various other interpretations which came from within Hinduism, are firmly embedded in and are seen as parts of mainstream Hinduism and retain the essential inclusive character of the faith, the latest ‘reformation’ movement comes from outside the essentially spiritual tradition of the religion. The prophets and high priests of this new movement, known as ‘Hindutva,’ are not saints, savants, sanyasis, and sages steeped in India’s rich spiritual tradition, but innovative ideologues and practitioners of political activism, where the ultimate objective is not salvation, nirvana or moksha, but political power garnered, as all political parties do, through the operation, and often manipulation, of the machinery of electoral democracy.

But for the fact that this new movement seeks to stand Hindu philosophy on its head by jettisoning what I have always considered the central, defining feature of Hindu thought, I would have called it a straightforward political innovation — an effective innovation as events have proved — and not be overly disturbed by it. What seems to distinguish Hindutva from other competing political movements in our country is the insistence of its advocates — a group of organizational entities collectively known as the Parivar — that political power in India is, or at least should be, in the hands of that section of the population that formally adheres to the Hindu religion.

All that this insistence means, they are quick to reassure the religious minorities, is that irrespective of the faith they follow, all Indians should embrace the cultural heritage and lifestyle of India, by which they mean the culture and ‘way of life’ associated with the Hindu religion and therefore called ‘Hindutva.’ So they claim their campaign is not directed against the adherents of Islam, Christianity or other religions who have lived peacefully in India over centuries and millennia and will continue to enjoy all the privileges of Indian citizenship including the freedom to practice their religious persuasion provided they become Hindus in terms of cultural outlook and lifestyle!

Political movements are essential features of the democratic process and it is important that political parties of different hues have total freedom to propagate their ideas and plans freely within the game rules of that process. However, the Hindutva movement has two features that cause concern:

2. It seeks to irretrievably transform the very ethos of the nation by replacing its colorful, vibrant diversity with a lifeless, dull, grey uniformity.

Hindutva by itself could be a beautiful concept provided it functioned as a vehicle for the propagation of Hinduism’s true message of universalism and inclusiveness and sought to create an ambiance where every one of us could strive, free from the slightest sense of insecurity or fear, to become a better Hindu, a better Muslim, a better follower of whatever our faith is, better Indians and, above all better human beings

Chalakudi N. Subramanian is former Secretary-General of the Indian Chamber of Commerce, Hong Kong, and a former diplomat. He lives with his wife Gita in Bangalore, India.