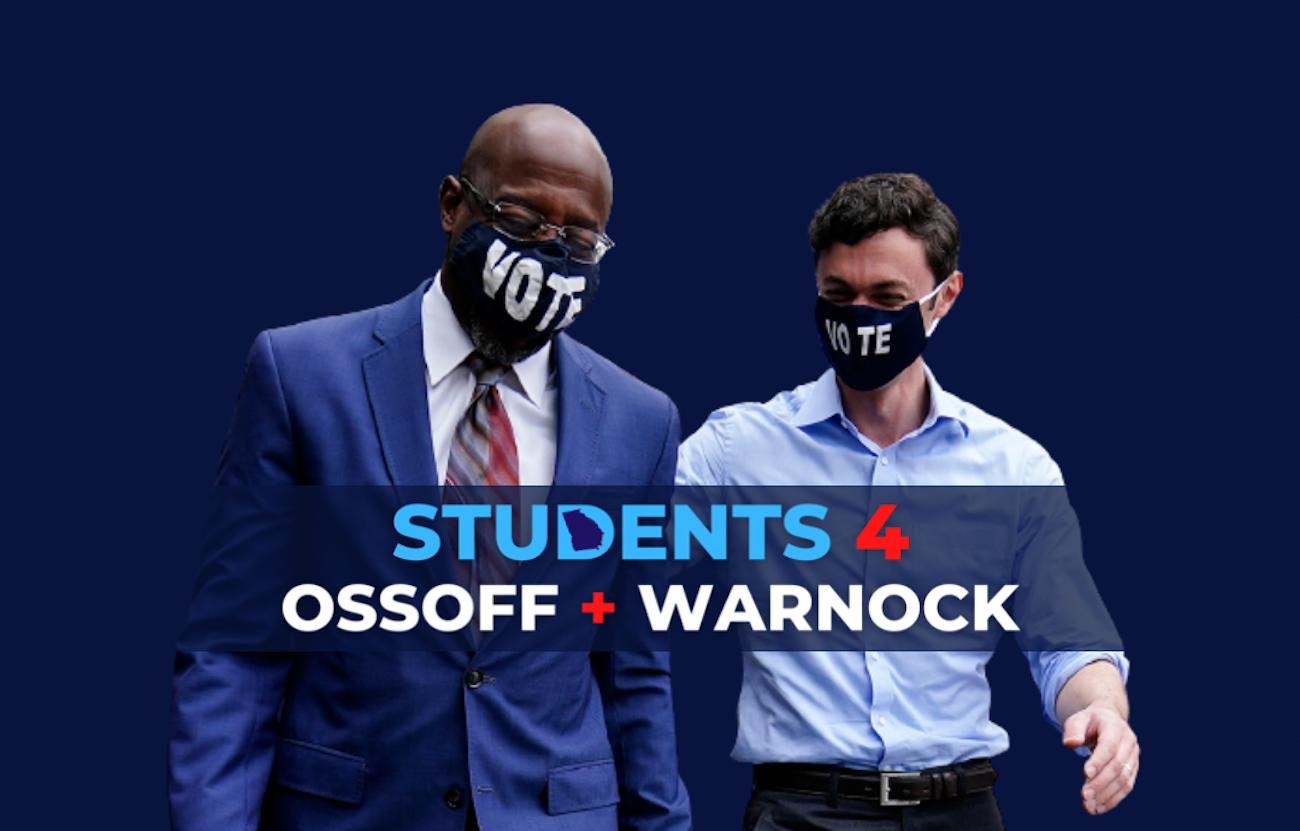 The general election is behind us and Joe Biden and Kamala Harris are set to be inaugurated in January. While many are taking this time to breathe a sigh of relief, organizers in Georgia are just getting started. The White House was not the only thing at stake, volunteers all over the country are now getting ready to fight for control of the United States Senate. This election cycle, Georgia has two Senate run-off elections since none of the candidates received over 50% of the votes in the general election. The election which will take place on January 5th. One race is a special election between current Senator Kelly Loeffler and Democratic opponent Reverend Raphael Warnock. When Senator Johnny Isakson retired in 2019, Governor Brian Kemp appointed Loeffler, thus this runoff will determine Isakson’s replacement. The other race is between current Senator David Perdue, who is up for re-election, and his Democratic challenger Jon Ossoff. With 48 Democrats and 50 Republicans elected to the Senate, these two races in Georgia will determine which party has control of the Senate for the next four years.

While many non-Georgians have brushed off this state as a lost cause, this year’s presidential election clearly illustrated that there is hope for Democrats in the South. After almost 30 years, Georgia flipped blue as Joe Biden won the state’s 16 electoral votes, guaranteeing him the presidency. This was no accident, however. I have seen firsthand the dedication of young organizers and organizers of color that have worked hard for years to make this partisan shift a reality. The powerful effect of these grassroots organizations was seen through the record youth voter turnout, which heavily influenced the results of the election. A demographic that has historically refrained from voting, young voters made up 21% of the state’s votes in the general election, more than that of any other state.

Turnout and involvement among racial minorities has also increased. With the movement for racial justice that occurred during the summer, many young people and BIPOC (Black, Indigenous and People of Color) individuals came to realize that their voice matters and can create lasting change in the government. One such minority group is Asian Americans. Asian Americans voter turnout has been historically low. However, AAPI voters in Georgia turned out in large numbers in November and could help contribute to Democratic victories in January. Asian American voter turnout in Georgia has reportedly increased by 141% since 2016.

All eyes are now on Georgia and many prominent influencers and celebrities have announced that they are moving to the state to help campaign for Ossoff and Warnock. Taking that as an example, many ordinary people and organizers from other states have decided that they will move here as well to support the Democratic Senate candidates. While this is an admirable offer, many Georgia organizers are cautioning against doing this. Due to the pandemic, a large influx of out-of-state volunteers would severely harm the health of many individuals and strain the already overwhelmed medical professionals in the state. Furthermore, political organizers who are from Georgia are experienced and are creating opportunities for people to be able to volunteer remotely. Everyone can help by donating, phone banking, text banking, and using their platform to educate people about the runoffs.

Why Some Telugu Groups in America are Opposed to Providing English Education to the Poor in Andhra?

Now that Joe Biden has been elected, the only way that he can fully deliver on campaign promises like effective climate legislation and access to healthcare, is if there is a Democratic Senate to help him do so. For young people who want to see real change in this country and want to take action to address issues like police brutality, racial injustice, and climate change, volunteering for Jon Ossoff and Reverend Raphael Warnock is easier than you think. Through youth-led organizations like Students for Ossoff and Warnock, you can easily phone bank, amplify important messages, and even set up phone banking operations with your own organization, regardless of where in the United States you are located. Follow @s4ossoffwarnock on Instagram, Twitter, and TikTok and take action to help flip the Senate!

Ishani Peddi is a senior at Starr’s Mill High School in Peachtree City, Georgia. Born and raised in Southern California, she moved to Georgia last year. She has been writing as long as she can remember and published a fictional work in middle school. A passionate poet, who has won numerous literary competitions, Ishani is involved in various clubs and organizations within her school and community. She is the Communications Director of the Georgia High School Democrats, a Co-Lead for Students for Ossoff & Warnock, the Vice President of the Starr’s Mill High School Young Democrats, the Secretary of the Young Democrats of Georgia AAPI Caucus, and a Civil Air Patrol Cadet, to name a few.