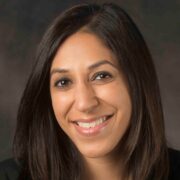 A year ago, I wrote an article for American Kahani during Domestic Violence Awareness Month about the rise of domestic violence in the South Asian community during the COVID-19 pandemic.

In that story, 13 years after the abuse, I shared publicly for the first time that I am a survivor of domestic violence. I wrote four short sentences:

“Ending a mentally and physically abusive relationship was the hardest thing I have ever done. Nearly 13 years later, the details of my relationship are still hard to share. I know I am lucky to have escaped. I’m thankful to be alive and that my life is free from abuse, control and the exhaustion that comes from living in fear.”

It is not much, but writing those words, caused me to relive some of the darkest moments of my life. A year later, when I was asked to write another piece on this topic, I thought it would be a good opportunity to share how writing those four sentences has helped me heal.
Why did it take me so long and why is it so hard for survivors to share their stories?

Sharing means reliving the trauma. For me, that includes hours of tears, nights without sleep, and days hiding under my covers so that I can disappear from the world.

But sharing, along with time, has forced me to face the past and work with my therapist to build coping and recovery skills to respond to triggers. And I’ve now acknowledged that no matter what I do or how strong I am, this trauma will always be a part of me. I’ll never be free of triggers. I could feel waves of anxiety while watching TV or reading a book. I could shut down at any moment while I’m in the middle of a disagreement or driving on a dark road alone. There is always a chance a repressed memory could come out to haunt me.

Some of my delay in sharing stemmed from my culture. As an Indian American woman, I grew up understanding that a portion of my existence was based on “fitting in.” Speaking up and sharing my story or the significant amount of domestic violence in our community was not and still is not considered socially acceptable. It’s not openly discussed.

Deep down, I also worried that my experience was not bad enough to warrant sharing. After all, I left my relationship before marriage and kids. I never went to a hospital for the mental and physical abuse I endured. I never filed a police report. I was educated, financially independent, and had a tremendous support system.

Writing these four sentences has opened the floodgates. It’s made me want to share more. Over the past year, I have taken several opportunities to share my experiences and use my voice to help organizations working to fight domestic violence and support survivors.

These conversations have been powerful.

They have shown that my experiences are living testaments. They highlight that there is no one way to measure the lasting pain and trauma caused by domestic violence. They make clear that domestic violence does not discriminate. It can happen to anyone, and it is happening in every community.

Conversation has given a voice to other survivors. I have had many conversations with individuals who heard my story and then felt comfortable sharing pieces of their own. Conversation helped them unpack their own trauma and take the next step in the healing process.

Conversation has helped me heal. I feel a sense of peace, calm, and strength I have not felt in close to two decades. I find myself being more patient, kind, and less angry. I have had fewer triggers and I am coping faster when they happen.

Last, conversation has allowed me to share how vital it is that we create support systems and safe spaces for survivors. When I ended my relationship, my family dropped everything to be by my side. They, along with my friends and colleagues, were there to listen to and support me. I was so lucky to have this village, it was my lifeline, and EVERY survivor deserves to have the same.

As we close out Domestic Violence Awareness Month, I urge you to learn more about domestic violence and to talk about it with your friends, families, and others in your life. I also challenge you to be that village that listens to, supports and believes survivors.

For additional resources and steps, you can take to fight domestic violence, click here.

Priya Bathija is vice president, Strategic Initiatives at the American Hospital Association, where she leads a number of efforts to increase access to health and health care. She also serves as a trustee and former president of the South Asian Bar Association Foundation, a non-profit organization that evaluates and funds organizations helping the most vulnerable in the South Asian community.