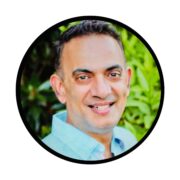 My mother’s name is Dr. Kalpana Parlikar. She has never delivered a baby in her life —in fact the sight of blood makes her queasy, but she has raised three boys, adopted and raised a beautiful girl — given them strong values and a foundation to do good in this world. She has her doctorate in Education, much like the incoming First Lady, Dr. Jill Biden, and prefers to be addressed as Dr. Parlikar.

Now in her 80s, she has apologized to me a number of times for being absent from our lives while she pursued her doctoral education, for the things she missed out because she was busy with her dissertation and preparing for the defense of her thesis. Not only did she have the four of us, she also had to oversee the care of her elderly father in law, my grandfather. She did all that and then some while she pursued her doctorate.

To this day as she celebrates her academic success, she harbors tremendous guilt of being an absent mother, wife and daughter in law for her family. She wears her Dr. with pride because it reminds her not only of her successes but also of her sacrifices, not only of what she gained but what she had to voluntarily give up.

My late father, Dr. Romesh Parlikar — an esteemed psychologist and a father extraordinaire — carried none of that burden in his life, despite pursuing his doctoral education in tandem with my mother. He never talked about being absent from our lives, he never found the need to apologize. The same societal double standard that ostracized my mother, protected my father.

So, Mr. Epstein, on more than one occasion my mother has corrected people who have addressed her as Mrs. Parlikar by saying, “It’s Dr. Parlikar” not because she is trying to show off her credentials but because that title emphasizes her struggles and her successes — both of which are a reminder of who she is, as a result of this journey.

So, while you and Mr. Tucker Carlson so chauvinistically disparage our Dr. Jill Biden, dig deep within yourself to see why you can’t just celebrate these amazing wonderful women who have pursued an education, raised families, changed communities — with a smile on their face knowing that some out there are judging them for making the choice to pursue and achieve their dream. Dr. Parlikar taught me that if I didn’t have anything kind to say, I shouldn’t say anything at all, but perhaps you and Mr. Carlson, didn’t have the benefit of that wisdom. So, this might be a good time to reflect on your own upbringing, Mr. Epstein (and Mr. Carlson).

Oh, and Mr. Epstein, as educators, Drs. Parlikar and Biden and many like them have instilled and continue to instill confidence in hundreds, if not thousands of young people to pursue their dreams, for some to pursue medical training and deliver babies. So, whereas they never delivered babies themselves, every baby delivered has been touched by the work of an educator who inspired that student.

Therefore, Mr. Epstein, both, Drs. Parlikar and Biden, and countless educators like them, have indeed delivered babies. Perhaps your viewpoint is so narrow, that even being in academia didn’t teach you how to broaden your horizon to understand the reaches of education and impact of educators in our communities. But then, I am not surprised in the least – your commentary along with Mr. Carlson’s, reflects what continues to be the reason why the United States of America remains one of the most chauvinistic nations in the world.

Maidens of the Moon: The Joyous Celebration of Kumara Purnima Kindles Memories of Home

It has taken America 244 years to finally elect a Vice President who not only happens to be a woman but a woman of color – and it is no thanks to people like you but the younger generation, touched by the work of educators, that chooses to see this world free of bias against color and gender – another great mark of good educators. So, take that, Mr. Epstein, and continue to learn in humility.

Get used to the fact that these strong women are here to stay, and here to sit at the table with you and me, no questions asked. In honor of the late Shirley Chisholm, let me say this – We don’t need our mothers and sisters and wives and daughters to bring a folding chair to the table — the chairs at the table are not ours to give as a platitude, but theirs to claim as a right, because without them, we wouldn’t be!

Wish you nothing but the best, Mr. Epstein (and Mr. Carlson). I was fortunate to have been raised by Dr. Parlikar – if only you had the same good fortune in your life!

Deven Parlikar was born and raised in India and moved to San Diego for his college education and decided to stay back and call it home. His professional career working with Native American and Alaska Native communities has allowed him the opportunity to live and work in Southern California, New Mexico, Arizona’s Apache country and northwestern Alaska including the Arctic Circle. He is actively involved in social justice programs, health parity and access to health issues for vulnerable populations.  He and his wife, Medha, have three children, Mallika, Meera and Eshaan, and two furry children, Beni and Hana and continue to live in the greater San Diego area.