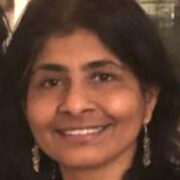 “He is a businessman, even if he talks rubbish.”

“He supports India – that’s probably the ONLY reason we Indian Americans support him.”

Speaking with a few Indian Americans who are supporters of Donald Trump, two things become quickly clear: one is that their support broadly rides on what they consider his economic successes at home, and his support for India over China abroad. The other is that they are willing to overlook absolutely everything else that has marked his presidency.

The argument about jobs and the economy is paramount, as it is for the average voter. Indian immigrants take pride in having “made it” in the United States, having arrived with the advantages of a good education and opportunities in India, and are often fiscally conservative. “My taxes are lower now,” says Shubha Sen, a Texas-based homemaker who doesn’t consider herself either a strong Republican or Democrat but favors small government. Trump’s 2017 Tax Cuts and Jobs Act was an enormous boon to corporations, slashing corporate taxes from 35% to 21% — permanently.

The personal tax cut, however, ends in five years, and the cuts will add over a trillion to the country’s debt over the next 10 years. But such details appear irrelevant. Kumar Cidambi, CEO for Center for Network Therapy, a substance abuse treatment facility, argues that this gift to corporations is in fact a gift for all Americans. “Where do you think pension funds are investing their money?” he asks, in an impassioned defense of trickle-down economics. “Get rid of taxes and regulations to get jobs back. People are hurting on the ground. Trump has removed over $100 billion worth of regulations.”

Their general belief and that of others I spoke with is that the economy is booming like never before and the employment numbers, especially for minorities, are the best they have ever been. Trump is credited with job growth, a rocketing stock market and a strong overall economy, although Cidambi adds that that is not to the credit of any president, the American economy always bounces back; any large economy does. Any mention of inheriting a strong economy and employment numbers from Obama – who himself inherited a budget deficit handed down by George Bush and a recession – is quickly shot down.

How they perceive Donald Trump’s gestures towards India is a clinching factor for many first-generation Indian Americans. “People began paying attention to him when he visited New Jersey in 2016 and said he loved Hindus and India,” said Dr. Raj Bhayani, a physician who is active among Indian physicians in the New York region, referring to the event hosted by the Republican Hindu Coalition that then candidate Trump attended in New Jersey where he excited the audience with references to the fight against radical Islamic terrorism. “People began paying attention to him, began seeing him as different. It was obvious that Indians in the U.S. need to unite and wake up as the Pakistanis and Islamists are doing,” he said.

Trump’s rallies and bonhomie with Prime Minister Narendra Modi were further symbolic reassurances that here indeed was India’s true friend – regardless of the lack of substantive outcomes in trade or investment. Trump’s gestures on China add a further thrill. Dr. Sampat Shivangi, national president of Indian-American Forum for Political Education, and a delegate to the Republican National Convention, points to the four-nation “Quad” and Trump’s assurances that he would “stand by India on the border issue with Ladakh” as examples of his bullishness will “make China think twice about any new aggression.”

What is more interesting than predictable conservative nationalist or economic positions though is the embrace of a president regardless of what they think of him as a person. Indians in general place a great deal of weight on individual and social values and norms. Trump personifies none of them, and no one interviewed cared to defend him on that score. Ann, a web developer and electrical engineer in New Jersey (who prefers to use her first name for this piece) who voted for Hillary Clinton in 2016, considers herself a spiritual person, and is comforted by “seeing Trump in church” although he does not belong to a church in Washington, attends church on occasion, and the public’s best memory of him in church is standing outside one, brandishing a Bible for a camera.

Let’s Make a Film: How You Can Help Me Deliver the Promise of ‘The Rose Garden’

But symbolic gestures matter and the Bible display has left its impression, as intended. His personal life, says Ann, “is his private business.” The only thing that matters to her is that he is the first person to crack down on H-1 visas that allow Indians to flood the market and “take away jobs from U.S. citizens.” For Shubha Sen, “it is not his personality but his policies that appeal to me: he is pro-freedom and pro-business.” Democrats, she argues, will succumb to the socialists in their party, and before long people’s religious liberty will be at stake, not to mention that they will be told “what you can see and what you can wear.” Socialism, she states firmly, “will lead to communism.”

Indeed, the specter of socialism is shared by Cidambi, a one-time Democrat, who makes no bones about his personal view of Trump: “He’s immoral and probably deserves all the adjectives that MSNBC uses. Obama was a decent guy but did nothing for the economy. We lost our competitive edge, he played defense with China.” With socialists like AOC, he says, the United States will surrender to “thought control,” where you are far too easily branded a racist for what you say, where “freedom of expression is not respected. It is like communism.” In this oft-heard vision, socialism, communism and the Democrats merge into a looming monster with a boundless appetite for all forms of personal freedom. Trump may be despicable, but he stands guard against this terrible future with the sure-footedness of an experienced businessman and entrepreneur.

Despite the president’s record of almost daily malfeasance recorded in lawsuits, investigations, and documented evidence  — from sexual assault to blatant conflicts of interest, open interference with the democratic process to the disastrous mishandling of the pandemic, not to mention the outright ugliness of his personal behavior – these Indian American supporters do not judge him by the totality of his presidency, but by his perceived success in the one issue or two that matters to them at the expense of everything else.

Has the Trump presidency opened up a new path into the Indian American vote? That’s what Dr. Shivangi believes, citing a poll he once saw which indicated a clear shift towards Trump. He expects the numbers in fact to double from the current roughly 20%, a prediction that is probably more reflective of enthusiasm for the candidate than anything else.  A recently released report, The 2020 Indian American Attitudes Survey – from the University of Pennsylvania, Carnegie Endowment for International Peace, and Johns Hopkins, along with YouGov, a research firm – says the opposite, seeing no perceptible shift, and indicating that 72% of registered Indian American voters plan to vote for Biden and 22% for Trump. It is probably not that the Republican party of Donald Trump has found a new Indian American base but that, after (or should we say despite) four years of the Trump presidency, his supporters continue to be fired up by the man they call the “unconventional candidate.”

Anita Palathingal manages print and digital communications for a healthcare advocacy organization in New York City. She is a member of the grassroots organization They See Blue, which is mobilizing South Asian voters across the nation.