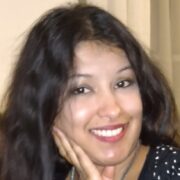 Day of the Pink Hibiscus: Observing Pitru Paksha When the Deceased Loved Ones are Close to the Living Realm

As the Biden-Modi bonhomie in Washington make headlines in India, the precipitous slide in Indian democracy and escalating violence against Muslims were in full display in the state of Assam.

This graphic video shows how dozens of armored policemen shoot down a lone Muslim man running towards them with a stick and then mercilessly rain their lathis on him as he lay dying on the ground.

“The man in a vest and lungi who was savagely attacked at Dholpur village in Assam on Thursday — shot, thrashed and stomped upon to death — has been identified at Moinul Haque, a 30-year-old father of three children and caretaker of two elderly parents who made a living – a very meagre living – growing vegetables in a patch of land that government claimed was not his and evicted him.”

The video also shows a civilian stomping on the dying man in a disgusting display of hate, in what looked like a ‘dance of death.’ He was later identified as a photographer hired by the state to document the eviction of 800 families from lands that they say they have been cultivating for several generations, but the authorities claim are government lands.

This eviction drive has displaced hundreds of families from their homes and sources of living, out into the open sky — angry, frustrated, and anxious about their future. Their places of prayer too have been leveled to the ground.

Whatever the truth, what is clear is that this eviction drive is the direct result of the State targeting people of Bangladeshi descent by any means necessary. It is very much part of BJP’s larger strategy to disenfranchise Muslims of India by weaponizing the National Register of Citizens (NRC) and the companion Citizenship Amendment Act (CAA).

What we witness here is not just the police snuffing out an innocent life, but the deadly consequences of a brutal majoritarian state, its authoritarian rulers, discriminatory citizenship laws, and incitement by politicians.

This is an ominous sign that more such inhumanity awaits Muslims of Bangladeshi descent, as BJP politicians in Assam push for so-called ‘reverification’ of the National Register of Citizens (NRC): Not satisfied with the outcome of the NRC, which left out many more Hindus of Bangladeshi descent than Muslims they are now demanding ‘reverification,’ a code word for BJP’s desire to render many more Muslims stateless.

It is no coincidence that the act of brutality that we can all clearly see in the video is being normalized and justified as ‘self-defense’ by the BJP Chief Minister of Assam.

Given such blatant disregard for facts, the news that the government of Assam has ordered an official enquiry into the shooting incident is of little comfort. History tells us that such enquiries seldom lead to identifying and punishing those higher-ups who are ultimately responsible for such acts.

We are often reminded by elders that words have consequences. In this case, repeated statements by Home Minister Amit Shah referring to Muslims of Bangladeshi descent as “termites” and threatening to throw them into the Bay of Bengal are already having deadly consequences. His poisonous words seem to be having the desired effect of creating majoritarian hysteria against the ‘other.’

If you are a supporter of BJP rule, please ask yourself if this is the “Hindutva = Hinduness” equation that many BJP/RSS leaders have been trying to sell in recent weeks. The kind of ‘Hinduness’ that is neither ours at HfHR nor of a majority of Hindus who say that respect for all religions lies at the core of their identity. (see https://tinyurl.com/6s7apkc2)

If you are Assamese and you have had genuine concerns about in-migrations from Bangladesh and had welcomed the NRC, please ask yourself if this is the kind of end result that you had in mind? Results that have already rendered stateless thousands of Muslims who have been living in the state for decades. Results that are unleashing state violence against the minorities, which you may able to stop before it is too late.

If today we are seeing frequent individual acts of brutality such as this, please imagine what kind of mass violence could follow the proposed reverification of Assam NRC, designed specifically to strip many more Muslims of citizenship.

Please, please, let us remember history: When a whole series of acts of atrocity committed in the name of the majority community are ignored and go unpunished — with the law enforcement machinery co-opted by those who govern — it inevitably leads to uncontrollable mass violence against the minorities, perhaps even to a genocide.

It’s high time for the millions of peaceful Hindus around the world to stand up and support our Muslim sisters and brothers in India, who are facing the most serious existential crisis since independence. We simply cannot separate their safety and well-being from the ability of all communities to live in peace and harmony. We have been quiet for way too long.

Raju Rajagopal is a co-founder of Hindus for Human Rights, an advocacy organization dedicated to human rights of all communities in India and the U.S. Details at www.hindusforhumanright.org. The above views are personal.

Shawintala Banwarie is a Surinamese Hindu activist from Holland and a member of Hindus For Human Rights. As an activist, her main focus lies on raising awareness for Hindutva, Islamophobia and racism in the West. In 2020, she co founded the Desi Solidarity Platform Holland which aims to build bridges between Dutch communities who have their roots in South Asia and to give a voice to these communities who until so far are not represented enough during the anti racism and political debates in Holland.