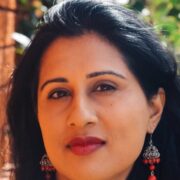 “You know what this Amazon review for “Pride and Prejudice” says? ‘Nothing special, just a bunch of people going to each other’s houses,’” my younger sister said, laughing, while reading her phone.

I looked up with a cross face at the sacrilege of this classic period-drama novel. “That’s the whole point!” I exclaimed. I had been trying to explain to her my love of period dramas during a film version of “Emma,” which she found tedious and hard to follow, but that I watched with rapt attention.

“That’s basically life as it was for me. Time is spent indoors, going to dawats, endlessly in limbo, in drawing rooms, going to other people’s houses and waiting to be chosen, waiting to get married! Now you know why I am obsessed with this, as you say, ‘white-people old-fashioned shit’.”

I lay back on the sofa thinking back to when my obsession with 18th-century literature began.

Where else but in 18th-century period dramas could I find a representation of women who wore long gowns and were looking for love in a closed world of balls, arranged marriages and voracious match-making Aunties? In these stories, I found a desire for personal happiness that competed with social and financial survival, as the hunt for an appropriate suitor became a life goal.

All this in a world where one’s desirability could easily be threatened by scandal, the hint of sexual impropriety, a boorish relative, or a faux pas. These stories told me it wasn’t beyond hope to dream of romance and a happy ending within a catty hierarchal society filled with subtle double meanings.

When an Auntie said cryptically, “You are looking so healthy, mashallah!” she meant, “you’ve gained some weight.” It was exactly the kind of thing that would keep an Austen heroine sweating for weeks. The heroine could write long letters to decode such comments as she watched the grass grow on some country estate. My suburban family house was not a country estate, but it had the same limpid slowness and occasional feverish emotional drama that drove Austen’s plots.

Jane Austen was basically Pakistani, I determined, and the balls she described were basically dawats. I mean, some of Austen’s characters even had cousin marriages. She understood the dilemma of a young woman, like myself, dreaming of another world but having to live with the practical realities of the one she was born into. I needed to get married, pronto, before I expired like bad mayonnaise at 27, like poor Anne Elliot, a spinster way past her debutante use-by-date.

We went to dawats every weekend: at parks, wedding banquet halls, function centers and other people’s houses. Here we wore long glittering shalwar kameez and sat around and ate and did not do much else until we had to clean up. Young women were admired at these events by eagle-eyed Aunties, looking on behalf of desultory young men who turned up for food before driving away to play pool and poker, a kind of modern-day hunting party. None of the guys seemed to worry that this same freedom to enjoy the night was never extended to the women and girls in the dawat drawing rooms.

So that was how it was. I read Austen and Jane Eyre and became mentally colonized by English period literature. “Jane Eyre,” by Charlotte Brontë, was my favorite book. She is an Austen heroine who has undergone therapy and developed a healthy anger for the social norms that have forced her into a narrow life unlike what her soul craves.

Jane is acutely aware of the dynamics between herself and Rochester, an older man with wealth and power and her boss. “I am no bird; and no net ensnares me; I am a free human being, with an independent will, which I now exert to leave you.” Yass girl, I yelled inwardly. It’s only when a fire has destroyed Rochester’s wealth and body, and Jane becomes an heiress, that the dynamics between them are more equal. It is on these terms she accepts him.

When I reread “Jane Eyre” today, I think of Bertha Mason, the “mad” wife and Jamaican woman of “intemperate” blood, locked in the attic by Rochester. I think of the “Hindoo” heathens Jane wants to convert in India. Jane’s temptation to convert Indians and her unquestioning acceptance of the “crazy” ex-wife being locked away start to sit uneasily as I pick at the legacy of these books in my life.

I so identified with Jane that I had been blind to who I would be to someone like Charlotte Brontë. A brown lady in need of conversion? Was Jane Eyre a white feminist? I wondered. The kind that marched out shrieking about oppressed brown women with a superior air?

Still, “Jane Eyre” remains my favorite book. The complex questions it raises reflect the evolution of my ambiguous relationship with the western “canon” as a person of color, existing both inside and outside it, both as observer and observed. It is the literary tradition I inherited as an English-speaking woman in the west – but not in a deliberate, official way, like the eldest son inheriting his fortune in an Austen book; more in a roundabout accident, like the bastard child of an affair on the continent after a plague wipes out the real heirs.

This kind of culture is consumed by us accidents of immigration and colonization with a double register, a register only people of color know. It’s a sort-and-filter adaptation, in which we become fully suspended in a world completely different from our own but whose internal rhythms and emotional range we can slip into, like western society itself.

We attempt to imbibe as much as we can to identify with the emotional reality of the characters before us. And we do that like a game of dress-ups, moving around in western Judeo-Christian history and literary traditions in disguise, understanding the secrets of the people we watch while divulging none of our own.

This is an edited excerpt of an essay in Sarah Malik’s recent book, “Desi Girl: On feminism, race, faith and belonging.” Published with permission.

Sarah Malik is a Walkley-award-winning Australian investigative journalist, author and television presenter. She currently works as a presenter and writer for SBS Voices. Her work focuses on asylum, surveillance, technology and its intersection with gender and race – most notably examining domestic violence, gender inequality and migration. Her debut collection of memoir stories Desi Girl: On feminism, race, faith and belonging was published by the University of Queensland Press in 2022.