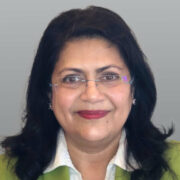 There was a minor incident a few years ago in my quiet suburb of Saratoga that made me raise my eyebrows and say “hmm.” I am an Indian American woman, naturalized citizen, living and working hard in this beautiful country for about 30 years. I am imaginative but not paranoid – I pride myself on displaying presence of mind (most of the time) as well as common sense. All these years of working in corporations, meeting wonderful mentors and colleagues, making friend after friend in the neighborhood never prepared me for this incident.

I was driving along in my neighborhood, when an elderly, kind looking, portly, very respectable looking Caucasian man, probably in his 50s, wearing a pair of expensive & light glasses overtook me on my right side rather aggressively, after which he proceeded to raise his middle finger, slowly, relishing what he was doing, his eyes locked with mine deliberately.

First thought was that he was saying a special hello to me – I thought I knew him from the neighborhood. I waved back quite cheerily. My focus was elsewhere initially but as I gathered my thoughts, I realized it was a different kind of signal from him — an unprovoked middle finger. The shock of it! I had not done anything wrong – was not driving too slow, had not cut him off — nothing. Nothing to trigger or tempt, yet the finger raised seriously, almost sincerely, along with a very nice smirk. Two times, for two seconds as though he wanted to leave an imprint in my memory as a present.

Since he drove up beside me, and I was turning left while he went straight, I could not take down his license plate number. It all happened so quickly and I had no view of his license plates from the side. Even if I had written down his license plate, it would have been a weird complaint that I would have taken to the cops. How would I have tried to convince them that there was a middle finger shown?  No real crime there. Probably a hate crime was brewing in his mind for future recipients, but no really, I had no evidence of wrongdoing. It would have been my word against his word, which he could have easily denied even if I could have tracked him down.

So, on my side, there was initial disbelief, denial, and then the self-blaming – perhaps I was wearing a cap that annoyed him, perhaps my eyebrows were not pretty that day, and therefore he thought I was a (burly) Indian or Mexican man?! Perhaps he had a deep-rooted hatred of “foreigners” or a grudge of some sort, lost his job or wife recently, or might have a strong hatred towards immigrants? I was trying to convince myself that he thought I was a man. After all, how can someone have such deep hatred towards a woman? An Indian American one? Not sure if that made me feel better or worse (for various reasons).

No explanation made sense. Later, I did hear of other similar incidents in the same area, where the same finger raised to others walking down the main street – mostly to those of Indian and Chinese origin. In some cases, someone also yelled out of a car saying, “Go back home to your country.” Perhaps it was the same portly man with a chip on his shoulder, or someone else. Who knows? All I know is that something was lost that day. That feeling of belonging disappeared, for a minute, during my little drive through my neighborhood.

I really have held onto the memory of that specific incident to make my friends and family understand that we should not take anything for granted, especially not our welcome to this country. I am sure that there are going to be many more incidents of prejudices that will surface now and then, for our generation and others after us. As we all already know, there has been an undercurrent of hatred and discontent, as well as serious economic blues throughout 2020.

We know things are going to get worse, before they get better, as people succumb to illness and recover from depression, while Covid-19 rages on, uncontrolled. We have to attempt to understand and acknowledge the root cause, the anxieties that result in such behavior as we start on a new chapter in 2021. I hope that some of these hidden prejudices and hatred will subside with the arrival of a decent President and control over the pandemic, and we can all go back to our simple lives where middle fingers and words yelled out of cars will simply not exist. We can then carry on, focused on the pursuit of happiness.

Charu Roy is a Product Management Executive with 25+ years of experience developing commercial software, having worked at both startups and large companies in the bay area. She brings strong expertise in introducing new features methodically as well as guiding customers in their journey to Cloud products. Charu has a M.S Computer Science from Center for Advanced Computer Studies, University of Louisiana, Lafayette, LA and a B.E Computer Science & Technology, from Bangalore Institute of Technology, Bangalore, India. She lives in Saratoga, CA. In her spare time, she enjoys writing little snippets and perspectives on appreciating the humor in small things, practicing and teaching North Indian Classical & Bollywood music, taking her dog Toffee on long walks and spending time with family and friends, cooking all kinds of crazy “Fusion” dishes.