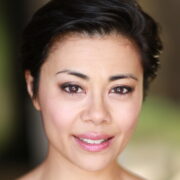 Most people in my life and in the industry know my first name as Angel. What many don’t know is that my official birth name is a word in Hindi, Apsara. My parents officially nicknamed me Angel after I spent the first nine years of my life putting up with the increasing indignity of people absolutely mangling Apsara. People would—and still do—put the “s” in front of the “p,” stress the wrong syllable, flatten the “a” vowel to that in “cat.” So, like many others have done, I started going by Angel, a name Americans could recognize and use to tease me with stale jokes about whether or not I lived up to the word.

I never stopped to think about the cost until relatively recently. On an alumni panel for NYU’s Graduate Acting Program a few years ago, I had a sobering realization, in front of a roomful of students and faculty. People were asking questions about what it was like to adapt to an industry that by and large is still very exclusive of Asian Americans. An Indian American colleague talked about how people get his name wrong most of the time, and it struck me that I go by Angel so often that I sometimes forget that I was—and am—Apsara first. The thought made me so sad. Not because I mind the name Angel—I feel lucky to have either of these as names—but because it felt like I agreed to some kind of erasure of the self without ever realizing that’s what was happening. It felt like the loss of something fundamental, yet a loss that is so long past that one is more sad to know they’ve moved on from it than they are to have let something go in the first place.

My father is from India. His name is Kamlesh, the roots of which—“kamal” and “lesh” mean “lotus” and “lord,” respectively—signify the god Ganesh. (And yes, we will come back to that first root in a minute.) One pronounces the “a” as ah, and there’s only one stress, on the first syllable: KAHM-lesh. But when my father immigrated to this country, he did what so many Asian immigrants have done: He simplified his name to the point of erasing its beauty and its meaning. He would tell people to just call him “Kam,” to rhyme with “ham.” Like so many of their generation, he and my Filipina mother chose to assimilate. They saw it as a trade: They would learn and adopt the ways and means of American culture in exchange for equal treatment and acceptance.

Like many of my fellow first-generation kids, I came to see it as yielding to the direction in which America demands immigrants bend—in other words, a form of erasure. You’re welcome here as long as you do everything exactly the way we do it and hide away everything that is unique and different about you. And by “welcome,” we mean we will kind of tolerate you, not bother to understand you, openly make fun of you, and just generally treat you with hostility or indifference.

The one Shakespearean line my father remembers and frequently quotes is, “What’s in a name?”, although he gives it his own Gujarati-to-English spin and rephrases it, “What’s in the name?” My dad is blessed with one of the most remarkable, genuinely philosophical and forgiving outlooks on life of anyone I’ve ever known. To him, things like names (or dates or material objects) are not worth getting upset about when they’re lost or changed; he taught us that the measure of a human is not in those things, but in these: kindness, tolerance, compassion, helping others, love, humility, respect. He did not feel indignity at changing his name because he believes that “if someone gives you something you do not like, and you don’t take it, it stays with them.” The insidious racism of a culture which suppresses a man’s name because it refuses to see equality in difference does not touch him, because he simply does not accept it.

On the other hand, parents know there is great importance in choosing their children’s names. They mean the name as both a gift and a hope. It is part of the fingerprint, the singularity of each human. Our name, whether we feel it is a burden because we discover that it no longer reflects our identity, or a glory because its symbolism resonates positively for others, is the one thing that cannot be taken from us by anyone except us. When our bodies and possessions are gone, the tether that binds our souls to the memories living after us is our name.

The apsaras are the “celestial nymphs” of the Hindu gods’ and goddesses’ pantheon; there are a host of them, as there are of angels in Christian theology. Apsaras are bringers of beauty, music, dance, light, and love. Angels are messengers, guardians, and when the need arises, warriors. As I grew up, I gave in to the exhaustion of loneliness and ill treatment and allowed myself to lose a part of me. I forgot my name. But now, the more I come into my power as an adult, I both aspire to be more like my father, and yet seek how to carve my own way through the morass of America’s stubborn ignorance.

Still, America did something extraordinary just now. As we did when we elected a Black man named Barack Hussein Obama to be our 44th president, the majority of us have shown that we don’t wish to be stubborn or ignorant. That we are capable of change—of growth. We have elected a Black and Indian American woman to the second highest office in the nation for the first time, and there is simply no way to overestimate the significance, the impact, the power of that act. All one need do is look at the countless photos parents have taken of the backs of their tiny daughters’ heads, both children of color and white, watching the TV screen the night of Nov. 7 as a daughter of immigrants, Kamala Harris, made her way to the stage to accept the unofficial but most definitely real mantle of trailblazer.

Harris’s mother Shyamala told the Los Angeles Times that she named her daughters for goddesses because “a culture that worships goddesses produces strong women.” (Kamala is another name for Lakshmi, the Hindu goddess of prosperity, luck, and beauty.) The little girls watching those screens on Nov. 7 will spend the next few years growing up in an America where someone who looks like them, who shares culture and experience with them, who comes from people this country has violently oppressed, now has power, status, and shine. They will see others learn to respect and listen to her, and they will learn to expect that from others in their own lives. They will learn that as much value should be given to their lives as to those of anyone else. And they will see most people bother to learn how to pronounce their names.

As this Boss Lady wastes no time in reminding you, you say her name “KAH-muh-luh.” Stress the first syllable (yes, the same root word meaning lotus) and use ah, letting the following two vowels relax. Like Kamlesh. Like Apsara. I feel the glorious weight of these two names, Angel and Apsara, and I now wish to breathe fresh air into those stale jokes by making actual attempts to live up to them. I owe an unpayable debt to Naveen Bahar Choudhury, the bookwriter and lyricist of Lady Apsara, for choosing my first name as my character’s name. And the music composed by Kamala Sankaram—yes, that is the same first name, this universe don’t play with coincidence—makes me feel like I can fly.

I don’t expect this film to have a fraction of the impact of a major motion picture, let alone a major national event. But if even a handful of girls and women can see themselves reflected and empowered by seeing this story, then I will have delivered my message, with music and love. And while I may not have had precedence for the acceptance of my name as I grew up, I have made it my life’s mission to change that for all the little girls who desperately need to see themselves on an artistic stage, the way that all little girls can now see themselves on a political one. How lucky I am to get some help from both a god and a couple of goddesses of the lotus along the way.

(This article was first published in americantheatre.org)