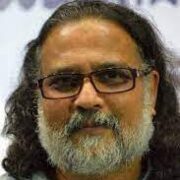 The Government of India through the Government of Gujarat is going to redevelop Sabarmati Ashram and build a ‘Grand World-Class Tourist Attraction’ there. The Government has so far acted in a secretive manner. Many of the long-time residents of the Ashram precinct, who will now be displaced have appealed to me to save their homes and the Ashram.

After returning from South Africa, Ba and Bapu chose Ahmedabad to settle down. They rented a bungalow in the Kochrab locality of Ahmedabad and established a small Ashram community there along with 25 to 30 others. All was well till Bapu invited a family of ‘Untouchables’ to live with them. The neighbors stopped access to the common water well and boycotted the Ashram and its residents. Some of the Ashram dwellers too refused to live with untouchables. Bapu stood his ground. He told those who refused to live with Untouchables to leave. The Ashram faced a boycott by society. Bapu realized that he must move out to a distant more isolated, self-sustaining space. A search for a suitable plot of land, across the river, began. He found a spot on the banks of the Sabarmati river between the cremation grounds and the prison. This plot of barren, undeveloped land was purchased and it was decided that a new Ashram would be established there.

When the plague outbreak occurred in the city it was decided that, apart from those engaged in relief work, others would shift to the new plot of land and start building the Ashram. Initially, while the land was being leveled and made cultivable the residents lived in tents. Then a tin shed was built to house the community kitchen, next to small, simple homes were built and activities started there. This is how Sabarmati Ashram came into existence post-1917. A school was soon started there. It was from here that Bapu left to lead the Satyagraha in Champaran, the movement to protest the Rowlatt Act was launched from here, the nationwide Non-cooperation Movement was launched from here.

Bapu was charged with sedition and arrested from the Ashram he was tried and sentenced to six years imprisonment. Bapu went from Sabarmati Ashram to lead the Viramgam Satyagraha and later the Satyagraha for farmer’s rights in Bardoli, Kheda. Sabarmati Ashram became the boot camp for training Satyagrahis in the technique of nonviolent Satyagraha. was developed. The revival and modernization of the Charkha, spinning wheel happened at Sabarmati ashram and the Khadi and village industries revolution began here. Even leaders of the American Civil Rights Movement were given training in nonviolent passive resistance at Sabarmati Ashram, much later.

When Bapu left on the Dandi Kooch on 12th March 1930, he vowed not to return to the Ashram till India won freedom and in 1933 he finally decided to disband it. In the wake of the Dandi Kooch and the subsequent nationwide Namak Satyagraha, the colonial regime unleashed a brutal reprisal to crush it. Farmers and satyagrahis bore the brunt of the oppression. Their properties were seized by the state along with all their possessions and they were rendered destitute. This anguished Bapu and he decided that he would surrender Sabarmati Ashram to the colonial oppressor as a mark of protest.

Since he was the instigator, he must bear the punishment. Bapu’s associates were not in favor of such a move. Eventually, Bapu was convinced not to take such a drastic step. Bapu decided to hand over the Ashram to the Harijan Sevak Sangh. He instructed them to use the Ashram for the upliftment and benefit of Harijans in perpetuity. The descendants of the original residents of the Ashram, today face being evicted. Bapu had instructed the Ashram administrators not to ever displace or dispossess them as long as they lived by the norms of the Ashram, Now they will be evicted, After not finding support, most of them have succumbed to the Government and accepted the compensation offered to move out.

What are the Government’s intentions?

The Government’s take over of the Ashram is almost complete. They have even formed a separate ‘Trust’ to Take over the Ashram and execute the project. Architects have been appointed, detailed plans of the redesign of the Ashram have been shown. Initially, the Government claimed it possesses a photograph of the Ashram as it was in 1947, it intends to restore the Ashram to that state. This means that even the acclaimed and award-winning Sanghrahalaya, designed and built by the eminent architect Charles Correa will be removed. Why? Is it because it was commissioned and inaugurated by the then Prime Minister Jawaharlal Nehru?

Another report claims that a ‘grand’, ‘world class’ tourist attraction is planned. Sabarmati Ashram is an internationally renowned destination and attracts tourists from all over, as it is. Yes, it is not glitzy and glamorous, but its simplicity and frugality are its grand attractions, its beauty and charm. Another says the government only wishes to add much-required amenities, parking lots, shops and food courts, so that the tourists are better served, just adding amenities should not cost $166 million, the amount the Government has earmarked for the project.

What Bapu wished for the Ashram?

Bapu in his bequest clearly stated that the Sabarmati Ashram must work for the upliftment and benefit of Harijans, Dalits, in perpetuity. How will the proposed revamp achieve this? There are Harijan families living in the Ashram precinct, they too face eviction because of the ‘proposed’ revamp, how does that benefit them? The colonial government had forcefully seized homes of farmers and Satyagrahis causing much distress to Bapu. By displacing Harijans the Indian government is acting like an authoritarian and tyrannical Colonial administration.

What are the trustees, custodians of the Ashram doing?

The trustees of the six organizations managing Sabarmati Ashram, its custodians, have surrendered to the Government meekly. They have meekly accepted that the Government is unstoppable and they are incapable of opposing them. They are acting more like agents of the Government rather than custodians of Ashram and Bapu’s legacy. Their attitude is best described as ‘nonviolence of cowards’, something Bapu despised.

In the last six months the Government has gone into overdrive, officials have been appointed and assigned to ramrod the project, known P. M.’s men. Committees have been appointed, only a few compliant ‘Gandhians’ have been included, these too merely in an advisory capacity, with no authority. Now the Government has even formed a Trust as the custodian and executor of the project. This is the background of what is happening to the Sabarmati Ashram. Soon it will be irrevocably lost. Corrupted forever, a legacy obliterated.

Why Sabarmati Ashram must be conserved as it is.

Bapu said, ‘My life is my message’, that is his legacy. In today’s times, it is very difficult to imagine the simplicity, frugality and openness of that man. His was a truly transparent, frugal life, there was no public man nor another hidden, private person. In present times it is difficult to imagine, let alone believe that such a one as him ever lived. Sabarmati Ashram and Sevagram Ashram at Wardha are the visual symbols of the man’s simplicity, his frugal existence, his transparency.

On visits to Sabarmati Ashram, at Hridaykunj, I have often heard children ask their parents, “Such a great man, lived in such a small and simple hut? He sat and worked in such an open place?” It is when they see Hridaykunj at Sabarmati Ashram and Bapu Kutir at Sevagram, that Bapu becomes believable to the present generation. When these visual examples of Ba and Bapu’s life are obliterated, Bapu will become mythology, easily twisted and distorted whenever required.

Those who have never understood Bapu and who are not bothered about understanding him, let alone emulating him, feel that Sabarmati Ashram needs to be made ‘grand.’ Their intention is not to preserve or conserve the Ashram or make it more attractive; they wish to corrupt and obliterate the legacy it enshrines. To convert a shrine of our independence movement and the life of the couple who lived there into a tourist plaza, an amusement park. After seeing what the Government and the agency appointed to ‘redevelop’ Sabarmati Ashram have done to Jallianwala Baug, under the guise of turning it into an attractive tourist destination, anxiety about the fate of Sabarmati Ashram is justified, everyone must be anxious. The question is not just about saving Sabarmati Ashram, it is about saving the legacy of Bapu and Ba. They murdered Bapu in 1948, now they are attempting to obliterate his legacy.

Why Have I Approached the Court Instead of Offering Satyagraha?

Many have asked me why I have appealed to the court to save Sabarmati Ashram and not offered Satyagraha to save it? My answer is, I am following Bapu’s instructions. There is space for a public agitation for protecting the Ashram, I accept that. Bapu prescribed steps for a Satyagraha. I quote what he wrote in ‘Young India’ on October 20, 1927: “Since Satyagraha is one of the most powerful methods of direct action, a Satyagrahi exhausts all other means before he resorts to Satyagraha. He will, therefore, constantly and continuously approach constituted authority, he will appeal to public opinion, educate public opinion, state his case calmly and coolly before everybody who wants to listen to him; and only after he has exhausted all other avenues will he resort to Satyagraha. But when he has found the impelling call of the Inner Voice within him and launches out upon Satyagraha, he has burnt his boats and there is no receding.”

My approaching the court does not rule out Satyagraha, a public protest can go on simultaneously. When the time comes and if we truly believe that Sabarmati Ashram must be protected and we are ready to sacrifice everything, Satyagraha must and will be offered with the resolve of ‘Karenge ya Marenge!’

On the eve of breaking the Salt Law and signaling the beginning of the Namak Satyagraha, Bapu appealed to the world. He wrote: “I want world sympathy in this battle of right against might.”

Today Sabarmati Ashram cries out for sympathy and support. We may not succeed in saving the Ashram and the legacy it enshrines. But let it not be said that we watched silently as it was being obliterated. Public opinion matters. Please raise your voice against the Indian Government’s plan to corrupt the legacy of Ba and Bapu. Please raise your voice to protect the symbol of that legacy, the Ashram. Remember its Sabarmati Ashram today, the idea of India is next.

Tushar Gandhi is the great-grandson of Mahatma Gandhi.