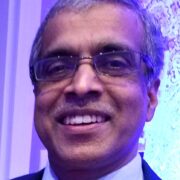 Hello America, the bubble called “American Democracy” has burst. We’re exposed. We do not have the luxury of living in the comfort and confines of this bubble anymore. We lost the ability of looking at the outside world from our own democratic lens, which we proudly claimed to be superior to others’ for over 200 years; which we used as a negotiating tool around the world; which we leveraged from the bully pulpit to advise others. The power of this bubble, which the founding fathers of our constitution and the executive, legislative, and judicial branches of the government worked and fought hard to create, nourish, protect, and nurture, is what we used successfully for decades after decades, to coin and mock words & expressions like “banana republic,” “Third World countries,” “totalitarian regimes” etc.

We have now lost our moral authority to police and lead the World — to inspire individuals from desperation to hope, to transform situations from abyss and chaos to peace and stability, and to uplift people from poverty to prosperity. The so-called banana republics, Third World countries, and totalitarian regimes are laughing at us today, because on January 6, 2021. The President of the United States of America has successfully demonstrated the creation of a “banana republic” within our democratic republic. In his utter seditious power play Trump unleashed thugs to assault the citadel of U.S. democracy, the Capitol building in Washington, D.C.

What was to be a day of celebration of democracy with the formalization of the electoral victory of Joe Biden and Kamala Harris, quickly turned into chaos when hundreds of mobsters in the garb of “American Patriots” wielding confederate and Trump flags breached the Capitol, vandalized the sacred temple of democracy, disrupted the ongoing deliberations, and lay siege to the democratic process; a process that has been taking place every four years as a smooth, simple ritual without much fanfare or attention ever since America got its freedom from United Kingdom in 1776.

The goons made sure it would not be a smooth ritual this time around, under the watch of the 45th President of the United States. Trump can add this infamy too – historic, never-done-before, first-in-the-American Democracy — to his list of “accomplishments” in what many of his allies like to characterize as “transformative” and “consequential” presidency. It is worth noting that the 45th had just lost the election on Nov. 3, 2020, after a tumultuous one term in office.

People — commoners, business leaders and people of authority alike – are perhaps quick to dismiss this as another aberration of Trump presidency, as they’ve done over the last four years, with somewhat of a timid, “snake-should-not-die-and-stick-should-not-break-either” response to many of Trump’s missteps, lies, bullying, and aggressions. Then there are others — primarily the fringe elements of the American society — who will continue to live in the world of alternate reality — a world Trump and his coterie of con artists, have successfully created and touted, and millions more latched onto – and knowingly or unknowingly danced to the dog-whistle of the ring master, Benedict Donald Trump.

Is anything going to come out of this? We all know emotions are running high in the society, deeply divided along party lines, but I’m uncertain of the specific responses to come in the next few days. Here are my calls to action and expectations, however:

@VP Pence and Republican leaders in the position of authority – I know you are furious and want to do something (or not) – must censure, impeach or invoke 25th Amendment. While it is necessary and important to send a clear message to the abusers of power and democracy in the nation’s highest office, don’t lose the momentum, don’t be dismissive, and don’t shy away from doing something consequential or meaningful – NOT because of the short two weeks you have, but despite the 2-week period you have at your disposal to act. This is the only way we respect the will of the voters and restore people’s confidence in democracy.

@President Trump, you talk about “strength” as a way to glorify the acts of your “American Patriots.” If you have an iota of real strength left in your spine and if you, as the leader of the free world, want to demonstrate that to the American people, this is the time – show some remorse, take responsibility for what happened at the Capitol Hill on January 6th, apologize with your heart and resign. We know you won’t do it, because that’s not in your DNA!

@FBI and law enforcement, in order to enhance the trust and confidence of the Americans in law and order and justice, the mobsters of the heinous act should be brought to justice. We have full faith in you and hope you will come through on this.

We the People have a responsibility too – a responsibility to take positive actions and act responsibly in supporting FBI and Law Enforcement. It would be a befitting tribute to the upcoming Martin Luther King Jr. Day if we follow through on his ideal exemplified here: “In this unfolding conundrum of life and history, there is such a thing as being too late. This is no time for apathy or complacency. This is a time for vigorous and positive action.”

Ramesh Hegde was born and raised in Karnataka, India, and has been in the United States for 32 years. He lives in Plano, TX with his wife, two daughters, and son in law.