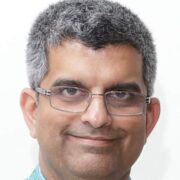 Recent coordinated attacks by a section of international vested interest groups and fear-mongering media houses on a newly appointed Department of Homeland Security’s faith-based security advisory council (FBSAC) member, Chandru Acharya, reflect another episode of hatred perpetuated against American Hindu organizations and their members. There has been a dramatic increase in Hinduphobic micro-aggressions and targeted Hindu shaming in social media channels and extreme left-wing geopolitical crusaders masquerading as journalists.

An observation worth noting is that despite being the target of an ugly mud-smearing campaign, Acharya has provided logical and sincere responses clearly articulating his inclusive personality and demeanor. It is not a surprise that many interfaith leaders and nonprofit organizational colleagues have come forward in his defense and commented eloquently in support of his pluralistic and inclusive credentials.

A few noteworthy testimonials are listed below :

“I have had the pleasure of working with Chandru on the South Asian American Voice of Impact (SAAVI) board. He serves as the president of SAAVI. Chandru defines Service. He personifies unconditional, unbiased Service to society. Chandru is instrumental in the success of the SAAVI. He brings solidarity, diversity, integrity, culture, and a sense of giving to our group and society as a whole…,” said Sangeeta Khalsa, Sikh American board member of South Asian American Voices For Impact.

“I have known Chandru as a friend for nearly a decade now. He is a man who embraces diversity and has been actively involved in community services/activities both at a personal level and through SAAVI. It’s very difficult for me to fathom his energy levels. He is always ready to help and support the community or individual(s) in distress. I am lucky to have known Chandru at a personal level,” said Jawwad Khan, Secretary of the Board, SAAVI.

The FBSAC provides advice and recommendations to the Secretary of Homeland Security and other senior leadership on protecting houses of worship, preparedness, and enhanced coordination with the faith community. In this committee of twenty-five distinguished faith leaders, Acharya is the lone Hindu voice representing over 3.3 million Hindu Americans born in the U.S. and those who migrated from India, the UK, the Caribbean, Africa, and other countries.

Over the last two decades, Acharya has actively worked with diverse community organizations working locally and nationally for social equity and pluralism. Following are some of his widely acknowledged accomplishments:

One would wonder what made such a cross-community friend and a leader of high integrity and stature be subjected to a baseless campaign of hate. The hate campaigns have been specifically critical of his association as a board member with Hindu Swayamsevak Sangh USA (HSS), a U.S.-based, independent, national organization representing Hindus in 34 states across the country.

HSS focuses on teaching Hindu culture and philosophy to Hindu Americans. It is a proponent of Hindu Dharma’s core philosophy of “Vasudhaiva Kutumbakam,” which, per Hindu scriptures, means “The entire universe is one family.” A close look at the events and programs of HSS demonstrates that it is an organization that promotes pluralism, human dignity, and freedom of faith. HSS works with diverse communities, including African Americans, Latinos, Native Americans, and LGBTQ communities. HSS volunteers have been at the forefront of community service initiatives in American society during times of distress – COVID-19, addressing food insecurity, to help raise health awareness, to highlight a few.

No evidence worth its merit has been produced against HSS that demonstrates that it works for any other agenda than its stated mission. Several neutral media and unbiased agencies have conducted extensive research and studied the work of HSS, articles, and its social media posts. No single example can show that HSS initiated any negativity and hateful campaign against any organization, community, individual, philosophy, or faith.

However, unfortunately, this hate campaign is more and more visible. These attacks often analyze organizations through the lens of the activists and not based on the practices, culture, and faith that these organizations followed.

Such so-called activism and efforts to cancel any good work in society may give a false sense of satisfaction. But in reality, such misuse of energy adversely impacts the people and the community that otherwise could benefit. It is worth self-reflection for the people and organizations who spend their time only in negativity on social media and in media.

‘One of the Most Intelligent Judges’: Defense Attorneys Praise Judge Amit Mehta For Conducting a Fair Seditious Conspiracy Trial