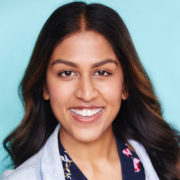 One of the “hot” questions people ask actors is why? Why acting? Because let’s face it, there are thousands of actors in Los Angeles, so why are we doing this? I’ve heard many answers. My all-time favorite is “I tried medicine, but I was too smart for it, I needed something to challenge my mind.”

I’m a very emotional person and acting allows me to channel my feelings into creativity. Recently I have also discovered that I find joy in bringing joy and happiness to others. I know for myself there are times where I don’t feel like finding a shoulder to cry on, so I turn to a film or a television show. There is always something to cheer me up or help me cry through my pent-up emotions. So, when there is a person on the other side of the world feeling a certain emotion, I want to be able to comfort them with my work.

Apart from seeking out stories as a distraction or a source of comfort, storytelling is important for social change and many of us learn through this medium. Every movie, TV show, play or web-series we watch has a message, no matter how simple. I think as artists it’s so important to reflect upon what is happening in society and elucidate that to the audience. I feel that this is particularly important because, while film and TV is traditionally seen as entertainment, many people are more likely to learn through visual storytelling. Many films and TV shows are even used as a form of edutainment — yes, that is a real word — you can google it.

Themes relating to race and discrimination have been addressed in many films and TV shows as a form of edutainment. For example, in the TV series Star Trek there is an episode of season three in 1968 where Capt. Kirk and Lt. Uhura share the first ever interracial kiss on American television! Interracial marriage was legalized in America only a year before the episode aired and remained highly opposed by many Americans.

Makers of the show were flooded with mail, some of which was outraged by the portrayal of an interracial couple. However, such negative letters were overwhelmingly outweighed by fan mail filled with love and positivity, which shows that this series had a profound impact on the audience. On a broader scale, this historic scene supported the themes of love and unity often emphasized in Star Trek, a message that resonated with many viewers. The response of viewers to this historic scene further illustrates that visual storytelling can be a powerful tool for people to connect with and understand messages and themes that support social change.

As an actor I have always chosen work with messages and themes that inspire me. Even two years on from the 2018 release of my Indian-Gujarati web-series Varta re Varta, people still reach out to me to share words of kindness and tell me how the series impacted them. The themes of the show reflected societal changes at the time of filming and centered around self-acceptance — particularly for members of the LGBTQ+ community. For many of the people who contact me, Varta re Varta is the first time they have seen a positive depiction of being LGBTQ+ in an Indian-Gujarati series.

For me personally, being involved in Varta re Varta was the first time I realized the kind of impact I could have on viewers as an actor and how important it is to be involved in work that can encourage social change. It is incredible to be able to positively represent people who have experienced both internal and external conflict relating to their identity and acceptance. What is wonderful about Varta re Varta, or visual mediums in general, is that they have been captured and will continue to exist in the world forever. I hope that even in the future, people who are struggling and need to see something like Varta re Varta will discover it and get something from it. I hope in general that others will continue to be affected by my work.

Fast forward to today — and especially with everything that’s going on in the world be it Covid-19; the Black Lives Matter Movement, colourism in India, awareness on mental health within the South Asian community and the many other pressing issues globally — it has been a wake-up call for me to be conscious about the projects I say yes to and to be more purposeful with my choices. I am currently working on a few projects, one of which is a short film called Sifter that follows the story of an Indian same-sex couple who celebrate their first Karva Chauth, a Hindu festival, together. I am excited to work on this project because it depicts the story of two people who have already come out, gotten married and have therefore accepted themselves but are still facing cultural and familial challenges.

For me as an actor, the appeal of this story lies in moving past the coming out/self-acceptance phase and depicting an actual South Asian same sex marriage – something I myself have never seen in Indian media. The film explores how the characters deal with their marriage, an issue that may seem unique in this context, but is very universal. The South Asian community have already begun to acknowledge and accept members of the LGBTQ+ community. It is my hope that Sifter can build upon this social change and be a part of changing attitudes by portraying and normalizing a same-sex marriage.

Another project I’m working on is a web-series called Fi aur Me about two South Asian women living in America, who tackle taboo topics within Indian culture such as colorism and racism; female pleasure and masturbation, sexual harassment and period empowerment. I feel so proud to slowly see more and more South Asian content out there and I want to be a part of this change, where we are not only better represented to the wider community, but also speak up and share stories that have yet to be heard within our own community. It is so important to be a storyteller. It is so important to bring light to the struggles and triumphs of human beings.

Storytelling brings people together and allows us to see things from new perspectives. Whether you are sitting at home with your family or watching something through Netflix Party with a friend that’s miles away, storytelling is a beautiful thread that connects us to one another. Not only do films and TV shows bring us together but they have the power to evoke social change. Most people yearn for connection and when we can empathize with a character on screen, we are more likely to understand the messages that are being conveyed. I invite you to seek out and connect with content that nourishes the soul and broadens the mind. To all my fellow creatives, we have a responsibility to be mindful of what we make and create stories with intention, because storytelling truly carries the power to evoke change. At the very least, we have the power to brighten someone’s day.

Ria Patel is an Australian-Indian actress, dancer, and writer. Art has always been there for her and that is what she wants to do for her audience: connect with them, help them feel understood, and ultimately evoke change. She graduated from New York Film Academy with a Bachelor’s in Fine Arts and also studied at Victorian College of the Arts in Australia. Some of her work includes the first ever Gujarati web-series “Varta re Varta”, and award-winning short film “Two Paper Nightingale and Nice.” Most recently she won Best Actress Award for her film “Trey Pops” and “Bandaid.”