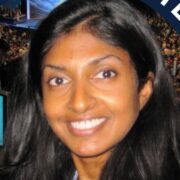 My Pledge to a Pioneer: ‘Don’t Worry Shyamala Auntie, We Have Kamala’s Back’

“I keep thinking about that 25-year-old Indian woman, all of five feet tall, who gave birth to me at Kaiser hospital in Oakland, California. On that day, she probably could have never imagined that I would be standing before you now and speaking these words: I accept your nomination for vice president of the United States of America.”
– Kamala Harris, in her historic acceptance speech at the Democratic National Convention.

I keep thinking that as a first-time delegate representing New Hampshire, I should have been on the convention floor. As an immigrant from South Asia, I should have been there to cheer as a woman of color and daughter of immigrants accepted the nomination for vice president. But even while sitting on my couch, this moment in history was not lost on me.

As a little girl, I could never have imagined a president or vice president that might look like me. I can still picture a photo of President Reagan hanging in our fifth-grade classroom. We wrote to President Reagan as part of a class project and he responded. I knew my father didn’t agree with many of his policies. I also knew that regardless of whether they agreed with him, my parents respected the office of the Presidency. It was, after all, in this same fifth grade classroom that we learned of the Challenger Shuttle disaster and heard the healing words of a president.

My parents emigrated from Sri Lanka in 1978 when I was a toddler to give my brother and me a better future. Like many immigrants, they worked hard. My father as an engineering professor at a small public college and my mother as a piano teacher. They were proud to become American citizens and participate fully in our democracy.  Election Day has become one of my family’s favorite days — a chance to vote for candidates who shared our values of education, healthcare, justice, and opportunity for all.

Like my family, the Biden-Harris ticket represents the unlikely story that is America. I first met Kamala Harris around 2010 when she was running for Attorney General. I was living in Washington, D.C. at the time and a small group of us were invited to meet her at a restaurant called Policy.  Sen. Harris often says of her mother, Shyamala, that she was “all of five feet, but if you ever met her you would think she was seven feet tall.”  Well, having met Kamala Harris in person she clearly inherited this trait. She was magnetic, smart, and empathetic. I left thinking what if I had met someone like her when I was a little girl.

When Sen. Harris announced her candidacy for president in early 2019 and made her first visit to Portsmouth, New Hampshire, I was honored to meet her again. This time I met her as a mother and brought my young daughter and family with me. Even though my daughter was still too young to understand, it was important to me to introduce her to someone smart, strong, and ambitious running for the highest office of our nation. Someone that looked like her. To this day, when my daughter sees Kamala Harris on TV she happily points and says her name with perfect pronunciation — and that in turn makes me proud.  I hope that by the time my daughter reaches voting age, seeing a woman of color in higher office will be normal.

We now have 75 days to make this dream a reality for my daughter and all our children. With more than 11 million who will be able to vote this year, making up nearly 5 percent of the nation’s eligible voters, the Asian American Pacific Islander (AAPI) is the largest growing electorate in the country. AAPI voters have the power to make a real difference in this election by voting for not only for Vice President Joe Biden and Sen. Kamala Harris, but also Democrats up and down the ballot.

As Senator Harris said, “Years from now — our children and grandchildren will ask — ‘Where were you when the stakes were so high? What was it like?’ We will tell them not just how we felt. We will tell them what we did.”

We sure will.  We must vote for a brighter future, not just for the AAPI community but for all Americans.

Make a plan at www.iwillvote.com to vote safely in person or by mail. Ask your friends and family to make a plan.

Together, let us turn the page and renew the promise of America.

Shanika Amarakoon is a delegate to the 2020 Democratic National Convention from New Hampshire.  he currently serves on the Executive Committee of the Portsmouth Democrats and is a member of the AAPI NH Democrats. She also co-founded South Asians for Obama in 2007. Outside of politics, Shanika has been conducting environmental public policy and climate change research for over 20 years.  She resides in Portsmouth, N.H., with her family.