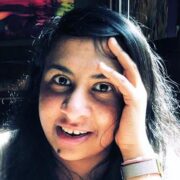 Oscars So Brown: Raising a Toast to South Asian Excellence in American Films and Television

In one of the defining scenes of courage on March 4, 2022, journalists from one of the last independent channels of Russia, resigned on air in protest against a new law that criminalized any opposition or news reporting about the highly unpopular war against Ukraine.

The new Russian law is one of the harshest attacks on freedom of expression where journalists could face up to 15 years of incarceration over any contradictions from the government messaging. For instance, using words like “invasion” or “war” could invite legal action as it strays from the government’s suggested word “special military operation.”

Persecution of truth for convenience is a common theme these days.

Vikram Sampath, a historian renowned for his work on Vir Savarkar has been accused of plagiarism by many prominent American academics like Ananya Chakravarti, Audrey Trushke and Rohit Chopra. Crediting writers whose work is used is standard practice and a matter of courtesy.

Savarkar, the historical figure, on whom Sampath’s research is focused, was himself fastidious over credit and royalty since many of his writings were translated in other languages. Sampath has filed a defamation suit on academics for raising objections that his work was plagiarised and on the media house for reporting these allegations.

The veracity of the plagiarism claims has not been refuted legally, yet the High Court of India has directed the academics to refrain from tweeting and the publication to remove the news from their website as it reflects badly on the plaintiff, essentially denying the academics the right to voice their opinion and barring media from fulfilling their duty.

Russia is not unique in censuring reporting on the pretext of protecting the nation’s image. This excuse is routinely used by many countries including India to prevent reporting of abuse of power by authorities.

Vikram Sampath’s case extends the boundaries of protecting reputation as it is no more about a nation, government, or a community but an individual. Allegations of harassment, assault, fraud are all detrimental to one’s image and with this case as a precedent, victims can be silenced and media be barred from reporting. Any criticism can be construed as slander and grounds enough to invite a penalty.

Media must have the right to report irrespective of how one feels or is portrayed in the reporting. The media cannot be asked to relinquish its duty and citizens stripped of their right to voice an opinion just because it’s uncomfortable for few.

In C.S Lewis’s words, “If you look for truth, you may find comfort in the end; if you look for comfort you will not get either comfort or truth only soft soap and wishful thinking to begin, and in the end, despair.”

Swati Garg is a software engineer based in Seattle, Washington.