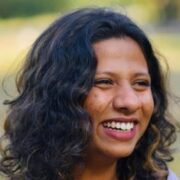 Twenty-three-year-old Abhilasha F.N.U. landed in Los Angeles with a suitcase full of aspirations in 2020. Hailing from a traditional North Indian family and having to take that leap of faith especially since she was the first woman in her family not only to fly to the U.S. but to have chosen a career that wasn’t very conventional, it took a lot of courage. From having zero connections in the film industry to having worked for the feature film “I Rise” (2022) which won 8 awards at the Christian Online Film Festival, Abhilasha has come a long way in such a short span of time.

Well, of course, it wasn’t a piece of cake for her, but she always had a knack for creating, expressing and storytelling. Becoming a script supervisor did not happen by chance. She worked hard for it. The biggest challenge that she faced immediately after landing in the U.S. was the Pandemic. It did pull her morale down, there was uncertainty especially since she was an international student who had come to experience the American way of storytelling firsthand. In hindsight, Abhilasha looks at it as a blessing in disguise. The lockdown gave her a chance to slow down, read and research various facets of filmmaking whether it be screenplays, continuity, shoots, edits, or timings.

She remembers reading Script Supervising and Film Continuity by Pat P. Miller and being deeply inspired. That was just the beginning, her love for reading books on screenplay or screenplays, in general, have just gotten stronger since then.

Abhilasha realized her role as a script supervisor held a lot of importance and was intimidated by the fact that her work could impact the quality of the whole production. However, when the project “Fear of Darkness,” a film based on the killing of George Floyd that tries to tackle the theme of Agoraphobia won the best short film award at Miami Film Festival 2020 and was nominated at many other film festivals, she felt relieved. Since then, it has been an upward graph, both in terms of self-confidence and the projects coming her way.

In such a short period, Abhilasha has managed to be a part of 57 projects. She has been a part of the film and television industry for 3 years as a script supervisor and has successfully worked on five feature films, eight short films and two TV series.

Since her first gig in 2020, Abhilasha has had the opportunity to work with Golden Globe-nominated actor Eric Robert, Satellite Award-winning actress Tori Spelling on “@home with Tori,” Grammy-nominated Leon Bridges on music documentary, “Leon Bridges — Life From Gold-Diggers Hotel” in association with Spotify and Object & Animal, with Amrit Maan on “Bismillah,” and with Emmy-awarded Keith David to name a few. Abhilasha has also worked with critically acclaimed directors like Joel Novoa (director of “Cobra Kai” and “Arrow”), Jensen Neon (best director 2018 Mediterranean Film Festival Cannes), and director Sohrab Khandelwal, a BAFTA nominee.

Abhilasha recalls how she believed she wanted to tell stories through reporting and therefore, had enrolled herself in a Masters in Journalism and Mass Communication program back in India, she said undertaking that course was crucial for her to realize that she wanted to become a storyteller beyond just reporting. She asserts that going to film school at New York Film Academy was the wisest decision she ever made. Initial days were spent on extensive research and attending production workshops.

Talking about the future, Abhilasha’s calendar looks quite eventful with promising projects such as #FightClub Bloodout featuring Black Hamptons’ talented actress Black Chyna and Iyad Hajjaj from “Ms.Marvel,” releasing soon on OTT platform, and other upcoming projects lined up for her. She is already in pre-production for a horror feature in Connecticut. She has recently wrapped up production in Colorado, and collaborated with reputed cinematographer Pietro Villani who has recently worked with J.K. Simmons.

Abhilasha is a member of Women of Color Unite and strongly believes in the inclusivity of voices when it comes to storytelling. She believes in community, imagination, and reverberation and volunteers in filmmaking events that resonate with this idea. She strongly believes creating a community and supporting each other is an essential part of a filmmaker’s life. Soon she will be seen volunteering in Getting Real’22 by International Documentary Association (IDA) held at the Directors Guild of America.

Abhilasha says, she has never tried to fit into the American scene of storytelling, she has rather focussed on what new she can bring to the table. As a script supervisor of Indian ethnic heritage, she believes that she can open a world of a new perspective to the audience, she can help her crew members, directors and cinematographers, and production designers weave a quality story.

Abhilasha aims to become a storyteller of substance. She is optimistic about her future career as she finds great opportunities coming her way based on her experience. She plans to gain more Hollywood experiences and go back home to India, to Bollywood, contribute and help narrate Indian films to audiences and connect with them.

Anila Sabu is a creative writer, currently in England chasing her passion for advertising communications.