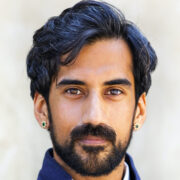 Hindus for Human Rights and the Indian American Muslim Council recently partnered to host an essay and art competition to engage young voices in the social justice and racial equity issues of our time. The contest called on students in grades 6-12 to comment on how their South Asian identities intersected with the history of civil rights in this country.

For the art competition, a jury of five artists, art historians, and curators selected three winners. The jurors were myself and: Salma Arastu, a Bay Area artist whose work aims for a universal and interfaith experience of peace and well-being, largely inspired by Islamic calligraphy and art; Arathi Menon, Assistant Professor of Art History, Hamilton College, New York (Academic work on Kerala sacred architecture),Yousuf Saeed, an independent filmmaker, researcher and designer based in India; and Thukral and Tagra, Delhi-based artists whose work regularly deals with social issues in India.

The judges selected a work by Victoria Maria Garcia of San Ramon, Calif., as the winner of the competition for the ways in which their image conveyed alignment between the South Asian and Black communities. The illustration beautifully acknowledges the ache of injustices that so many marginalized people face in our world — past and present — while also conveying the courage and power that comes when our various communities come together to fight for justice and lasting change. Victoria received a prize of $1,000.

The first runner up is a work produced by Vaishnavi Murthy of Acton, Massachusetts, that shows Krishna raising his hand in a gesture of blessing. In the street below him, figures move about (including a protester), each with the flame of peace burning in their hearts. Vaishnavi received a prize of $500.

The second runner-up is a work by Anya Chopra of Orange County, Calif, that centers and honors the importance of women in peaceful protests and social justice movements. The drawing shows a clenched fist raised in peaceful resistance, adorned in henna markings and with “BLM” across one of the painted nails.

The prizes were announced in an award ceremony on March 13 by Congresswoman Pramila Jayapal. Special guests at the Award Ceremony were HFHR Advisory Board Member and grandson of Mahatma Gandhi, Prof. Rajmohan Gandhi; Executive Director of NAACP-Alabama, Terra Foster; and professor of Peace and Conflict Studies at the UN-affiliated University for Peace, Dr. Mary E. King.

The whole award ceremony can be viewed here. Hindus for Human Rights and Indian American Muslim Council plan to make this an annual initiative.

Siddhartha V. Shah is the Director of Education and Civic Engagement, and the Curator of South Asian Art at the Peabody Essex Museum in Salem, Massachusetts. He has published extensively on Himalayan art, the visual and material culture of the British Raj, and the conflicts and intersections between religion and modern art. He earned his BA in Art History from The Johns Hopkins University, an MA in East-West Psychology from the California Institute of Integral Studies, and a PhD in Art History from Columbia University.