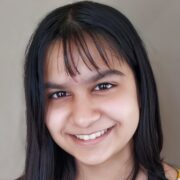 Namaste. Mera naam Anya Chopra hai. I am a cisgender, able-bodied, South Asian American girl, and I have lived in Orange, California my whole life. I am a 13-year- old who wants to learn more about social justice and the civil rights movements as well as how I can advocate for human rights.

All four of my grandparents and my dad immigrated from India in the 1960s and 1970s, and my mom was born here in California. If it were not for Black activists who fought for civil rights for all people, I don’t think my family would be here today. The Immigration and Nationality Act of 1965 opened the door for immigration for many South Asians, and the Civil Rights Act of 1964 gave us opportunities to succeed and to live good, happy lives. I am grateful for the people who did the hard work advocating for civil rights. I feel a responsibility to continue doing the work for social justice for all communities.

My mom and dad were always very involved in social justice, so it is something I grew up learning about. For example, my mom would often take us to rallies and protests and help us write letters to our representatives to advocate for human rights. Last summer, I baked 500 cookies with my dad for Bakers Against Racism, which I participated in with one of my best friends. My dad and I raised about $400 for the Equal Justice Initiative (gives legal representation to people who were wrongly incarcerated or were not given a fair trial) and Embracerace (supports parents to raise children of color).

I felt like I was doing something good for the world by donating to these causes. My mom and I also participate in a social justice family club which she helped to start for kids my age to discuss and learn about the world around us and how we got to this point. We learn about past and current events, since we are all living in history and can make a difference.

One of the major things I remember learning is being an upstander versus being a bystander. Upstanders fight for justice and do things to fix problems whereas bystanders just watch and allow the injustice to happen. The world needs more upstanders otherwise what we are taught is “normal,” which is racist, sexist, and more, will continue to be “normal.”

Most people experience both privilege and oppression, but many people don’t realize their privilege. I am very fortunate to be middle-upper class, a U.S. citizen, English-speaking, and cisgender and straight; however, I also face oppression in ways like the color of my skin, my gender, and being a kid because people don’t often take kids seriously. Since the privilege is something we don’t often realize, we might not see how hard it could be for someone else.

For example, going up stairs is something I don’t often think about, but for some people with disabilities, it is a difficult or even impossible task. Although I am not Black, I am still a person of color and I think it is important we advocate for each other in solidarity.

A lot of people think that Asians are “model minorities,” but that doesn’t take into account the centuries of oppression faced by Black people or the fact that the Immigration and Nationality Act of 1965 gave preference to immigrants who were well educated. It is important for South Asian Americans to stand up against anti-Blackness and all forms of oppression.

There are many injustices that need to be addressed, like poverty, racism, sexism, discrimination against LGBTQIA+ people and caste oppression. During the COVID pandemic, we are also seeing inequities, such as unequal access to the internet, vaccines, healthcare, and ability to social distance.

There is also a lot of anti-Asian racism and it is important we stick together during times of oppression. As Angela Davis said, “In a racist society, it is not enough to be non-racist, we must be anti-racist.” We can say we are against racism, but that doesn’t mean anything unless we do something. I strive to be an upstander and advocate for human rights for all people.

Anya Chopra, a 13 year old from Orange, California, is a granddaughter, daughter, sister, friend, and girl scout. She loves going to the beach, baking, and learning different languages, such as Spanish, Hindi, and American Sign Language. Anya’s  essay was declared the second runner-up in the middle school category at an arts and essay contest organized by Hindus for Human Rights and the Indian American Muslim Council.