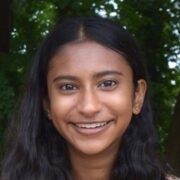 Recently, while in a hurry to get to a meeting across campus, I was laser focused only on the quick cadence of my steps. However, as I passed by two people in conversation, my attention diverted to the sound of one of their voices. The man appeared to be South Asian, and his voice was rich, thick and saturated with my own father’s accent. Immediately, I felt a wave of comfort wash over me despite my continued mad steps toward my meeting place.

Since coming to the University of Michigan, a predominantly white institution, I have found myself missing the familiarity that comes from my parents’ Indian accents. Although I also attended a predominantly white high school, my home was a designated space for my family’s ethnic background to flourish. My parents’ distinct accents were synonymous with the warm and welcoming definition of ‘home’ they cultivated for me.

However, on campus, there is not a similar place for me to retreat into. While nearly 15% of the University’s undergraduate population is international, with one of the biggest communities being Indian, I’ve observed a disconnect between native-born and international students. I don’t see the two groups mixing often, and that might partially be because of the way people with ethnic accents are othered in ways extending far beyond campus. It’s a prejudice that is most clearly evident within popular media.

Indian characters in television are often comedically portrayed, with the punchline of the joke resting on their foreign accent. Caricatured figures like Raj Koothrappali from “The Big Bang Theory,” Ravi Ross from “Jessie,” and Apu Nahasapeemapetilon from “The Simpsons” are all male, awkward and speak with a thick Indian accent. And, while the characters speak as though they are directly from South Asia — or rather a misconstrued, stereotypical version of South Asia — on television, each of the actors speak with an American accent in real life.

If you closed your eyes and listened purely to the sound of the actors’ voices, they would be indistinguishable from their white American counterparts. In fact, Apu was formally voiced by actor Hank Azaria: a white man with no connection to South Asian culture, who later stepped down from the role due to his perpetuation of harmful stereotypes.

The Butt of Jokes

Moreover, the vast majority of these male South Asian characters — at least those with an accent — tend to be socially inept. They focus only on school, can’t find any romantic partners, have limited numbers of friends, are painfully blunt and don’t understand any American idioms — all characteristics that make them the butt of jokes. Any time I am introduced to such a character on television, I hold my breath, waiting for the moment someone makes fun of the character’s mode of speaking.

Take, for example, this scene from “The Office.” The main character, Michael Scott, feigns an Indian accent while pretending to work at a convenience store — depicting a long-held television trope. While mimicking the accent, Scott uses incomplete sentences to communicate, thus insinuating that all foreigners are poor English speakers and/or unable to hold conversation. Although this scene ultimately ends with an Indian-American slapping Scott, revealing the unacceptable nature of his mockery, the damage is done: reductive television stereotypes against South Asian men persist.

It is this harmful representation that makes me worried about others’ perceptions of my own family. My father speaks with a strong Indian accent, but he is a complex and interesting man. And, the fact that I feel the need to preface this assertion with “but” shows just how deeply rooted the stereotype is. My dad loves talking about history and politics, is a walking encyclopedia of idioms and gives exceptional advice. And yet, mainstream television never demonstrates these qualities. It only depicts the harmful, hyperbolic versions of South Asians — particularly South Asian men — that appeal to a white audience’s humor.

When speaking about Apu’s comedic contribution to “The Simpsons,” show co-producer and writer Dana Gould stated, “There are accents that by their nature to white Americans sound funny. Period.” Americans are afforded the luxury of finding light-hearted humor in ethnic accents, while these jokes serve as the foundation on which America’s ethnically-targeted bigotry is built. Long before I had the language to express such injustice, I experienced this bigotry in the forms of shame and otherness.

As a child, I would feel ashamed to translate my father’s accented English to my non-accented English. Once while shopping in Walmart, my father and I spent 20 minutes wandering through the store, asking store associates where the flowers were. We were repeatedly directed to the baking aisle, where the flour was. When my father shook his head, explaining that what we were looking for wasn’t in the baking aisle, we were met only with shrugs and confused faces. It wasn’t until my 7-year-old self asked that we got the answer we were looking for.

The store associates’ confusion came from an innocent and genuine uncertainty of what my father was saying. But, despite living in the United States for my whole life, and despite my father’s American citizenship, I still feared that they viewed us as outsiders unworthy of our stay here. Their nonchalant attitude toward understanding what we wanted reinforced my idea that we were a mere nuisance.

I experienced this same worry throughout my childhood, scared that my friends’ well-spoken parents would judge my father for his way of speaking. Though I never experienced any bigotry from my friends or their families, I was concerned that my father’s stuttering or mispronunciation of words would categorize him as the cliche ‘awkward Indian.’ After all, all of the media I was consuming told me that Indians’ accents immediately reduce them to one-dimensional, laugh-worthy characters.

During my brother’s college graduation, as my family and I watched my brother line up alongside his peers, we all felt sheer excitement. Seeing him before the stage on which he was about to receive his diploma, my dad proudly shouted his name — Akhil — to get his attention for a photograph. In response, a white graduate standing near parrotted “Akhil! Akhil! Look here,” with an artificially thick and inaccurate Indian accent.

What was supposed to be a joyous and innocent moment quickly turned into one of shame and embarrassment. My father’s voice taught me multiplication tables at our kitchen table, guided me through the task of riding a bike and cheered for me during high school sports games. And now it was being mocked in front of an entire crowd of people.

The Whiteness of Accent

Despite the loving nature of his voice, my father’s accent is the recipient of vehement hate and prejudice — treatment that is wholly unjust and racially motivated. As a culture, we’re socialized to celebrate British and Australian accents, touting them as sexy. The difference between these two groups of accents? One is native to predominantly white countries and the other is native to predominantly non-white countries.

This bias, like most other racial biases, stems from colonialism. British accents belonged to those of the ruling class and Indian accents belonged to the subordinated class. While these power structures may have dissipated on a formal level, the power imbalance remains, woven into our country’s socio-political fabric. Social hierarchies, perpetuated by popular media, continue to treat ethnic minorities as second-class citizens. Or, in this case, as clowns that exist not as three-dimensional, dynamic American citizens but as the source of a cheap laugh.

Hearing the ethnic accent native to one’s motherland can feel like a warm embrace. To others, it is a symbol of unwanted foreign encroachment. If mainstream television perpetuates the idea that all Indian men with accents are awkward or inherently the ‘other’, the viewers will internalize the message and believe it to be true.

While this was once a painful point for me — causing me to be ashamed of my Indian family’s mode of speaking — I have found so much value in the richness of the accent. It doesn’t have to just be an opportunity for people to target and express their prejudiced views. It is a reminder of home and family.

And, while I no longer feel the embarrassment I once did with regard to my father’s accent, I still get nervous about offhand comments. I feel a need to protect him from the bigotry, but I feel powerless to do so. Ultimately, it is the media that shapes people’s thoughts and opinions. Only once it accurately depicts the wide range of Indian men’s personalities and interests will people understand the truth.

Kavya Uppalapati is a student at the University of Michigan and a Staff Reporter at The Michigan Daily on the news section.