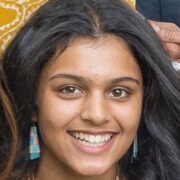 On June 23, a Hindu Awareness Workshop was made available to all Carmel Clay Schools (CCS) teachers. This initiative was part of an effort to increase and acknowledge diversity and cultural differences in a school environment. By attending this workshop, teachers got to learn about Hinduism, view posters of the Darshana exhibition, and try delicious Indian food.

Asini Jayarapu, Arya Goel and I, all CCS students, lead this workshop. We Hindu Americans created a presentation that touched upon topics such as Hindus around the world, the concept of divinity, Hindu practices, beliefs, and misconceptions. The presentation included information on Hinduism’s contributions to science, arts, architecture, and other contributions toward the improvement of quality of life such as yoga and Ayurveda.

Hinduism is the 3rd largest religion in the world, consisting of 1.16 billion followers, representing 15% of the population. Hinduism is the oldest active religion. It has deep and ancient roots, for it has been practiced and has evolved over thousands of years due to the philosophical contributions of many. Additionally, it is also crucial to remember that all Hindus aren’t exclusively Indian and all Indians aren’t Hindus. Hinduism has amassed a following of diverse people all over the world.

An important Hindu tradition is greeting with a Namaste. Namaste means, “I bow to the divinity in you.” Hindus see divinity in everything, from the largest ocean to the smallest insect. Hindus believe that all religious paths are valid and will lead to the same ultimate truth. They value the belief of pluralism, or multiple paths coexisting simultaneously leading to the same divinity.

Another core Hindu belief is Dharma, or, “that which sustains.” It is believed to be a natural law that sustains, protects, and nourishes society, thus bringing harmony. It focuses on duty and responsibility toward one another and cultivates good core qualities among Hindus.

As Hinduism made its way into the Western world, misconceptions began to arise, one being vegetarianism. Many have come to believe that all Hindus are vegetarian, however, vegetarianism is a choice for most Hindus. When you look at the typical Hindu meal, most components of the food can be traced back to cows. Their generosity has generated a reverence for them, therefore Hindus don’t eat beef. Hinduism is also commonly mistaken for a polytheistic religion. In Hinduism, each deity is the manifestation of one truth, or “Brahman.” Since Hindus have imagined Brahman in many different forms, it has caused the misconception that Hinduism is a polytheistic religion.

Perhaps the greatest misconception is the caste system. It is important to know that this concept has no religious connection, and hence shouldn’t be associated with Hindu Dharma. Historically, Indian society had different roles that were necessary to make the community prosper. However, as colonial powers took control, they created the hierarchy known as the “caste system” dividing these roles into different castes.

A CCS elementary school teacher asked: “Do Hindus worship the same God as other religions?”

The word “God” is a poor translation of the Sanskrit word “Bhagwan.” The divinity that other faiths worship is a different interpretation of the Brahman Hindus pray to. So simply, Hindus don’t exactly worship the same divinity, however, the Hindu view validates all manifestations.

Many teachers had questions, like this, throughout the presentation. Many of these questions to the average Hindu would have seemed elementary, but to teachers, they were things they had never learned. It caused us Hindus to realize how little our own teachers had known about so many of their students when it came to their personal life.

When it came to answering these questions, it became slightly tricky because such questions that seem easy to answer, cause many to overthink them. Luckily, the Darshana posters set around the room had encompassed much of the information teachers needed to know. They ranged from explaining Namaste to the meaning of Dharma and the different festivals Hindus celebrate. These posters combined both simplicity and appeal, causing their audience to acquire knowledge effectively.

(Arya Goel and Asini Jayarapu also contributed to this story)

Eesha Singh is a rising sophomore at Carmel High School. She is a volunteer of the Carmel chapter, Sadhana Shakha, of Hindu Swayamsevak Sangh for 8 years.