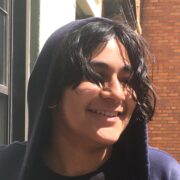 I’m a half Jewish-American, half Indian-American 13-year-old boy growing up in New York City.

Last summer, with the murder of George Floyd, the entire country exploded into protests. I was filled with rage that another black man was killed saying “I can’t breathe.” It made me think about how the Black Lives Matter movement has been in my life for as long as I can remember.

I remember being a kid and going with my parents to marches. I didn’t fully understand what was happening back then, and even now I feel like as a brown-skinned Indian American, it’s not my place to speak up on this issue because while I’ve faced racism, it couldn’t compare to what black people go through on a daily basis.

In response to George Floyd’s murder, my school — like many others — created “affinity spaces” for kids, split up by race, gender, religion, or sexual orientation. At first, I saw it as a way to finally speak up and find my place in the discussion but as the conversations started, I found myself backing down from the podium and listening from the shadows. I couldn’t shake the feeling that I was talking about something I shouldn’t be.

I see the Civil Rights Essay and Art Competition hosted by Hindus for Human Rights and Indian American Muslim Council as a way to explore where I fit into the conversation about race in America, how my heritage and identity connects to the history of the country in which I was born, and the history of the parts of the world that my parents are from. I’m hoping that this competition will help me convince myself that I do have a voice and I do have a role in the conversation.

I’m sure I’m not the only one who feels the same way.  To all the other South Asian kids out there who are similarly trying to figure out how they fit in — how to talk about the ways we are marginalized or silenced or insecure, without taking up space in the important conversation about being black in America — check out this competition.

A Sonnet in Silicon Valley: Join Us for Poetry Slam to Celebrate the Black History Month

And if the topic isn’t compelling enough, maybe the $1,000 cash prize will persuade you.

Satya Shaw is an 8th grader in Brooklyn, New York. He loves to read, sing, play piano and hang out with his friends. His dream is to become an actor.