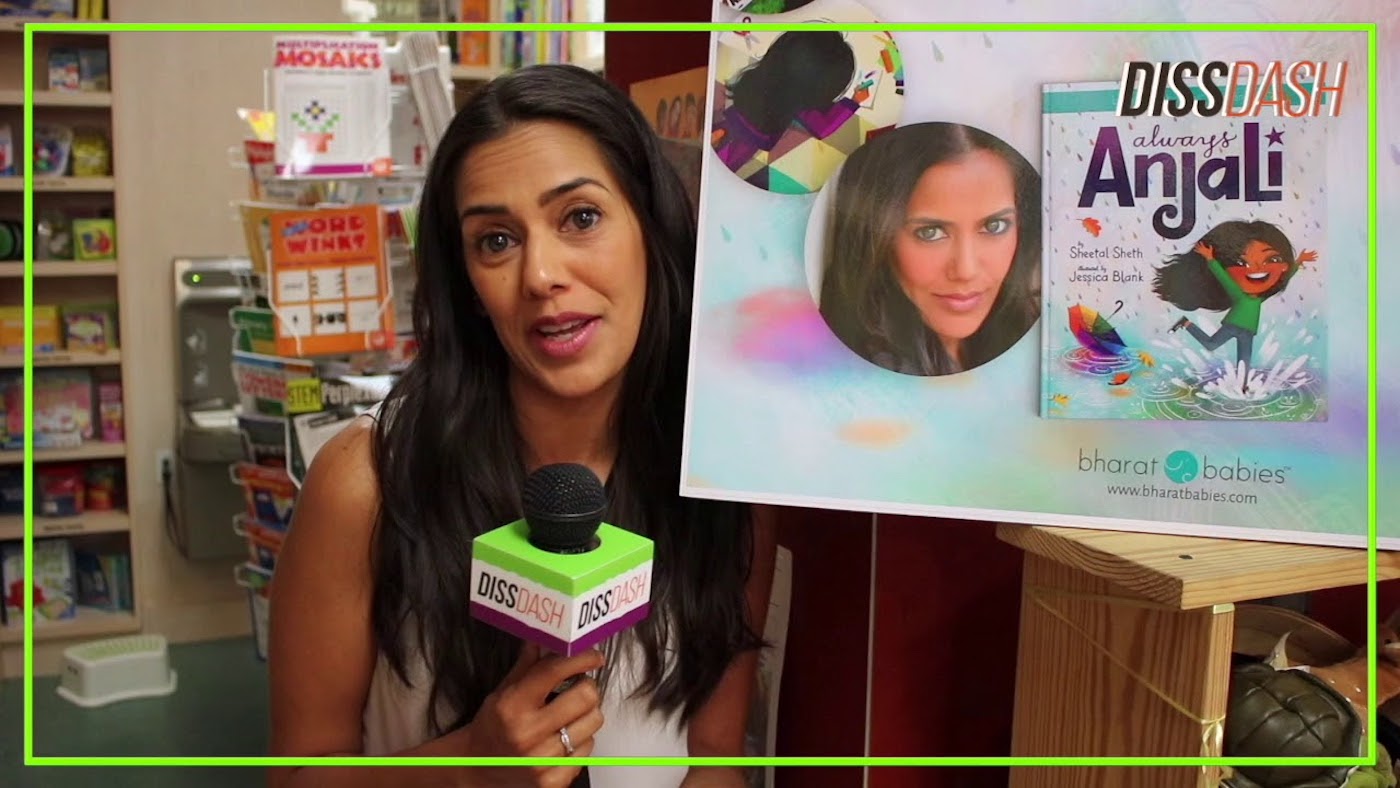 Sheetal Sheth is not letting cancer get in the way. Nearly two years after her diagnosis with breast cancer, Sheth is now cancer free and busier than ever. There’s books to write, films to act in and produce and social, civil and political battles to be fought. With determination and dedication to keep pushing on, Sheth spoke to American Kahani about her projects and her journey as an author.

The idea of writing a picture book came to Sheth when she was pregnant with her first child. As she was shopping for children’s books, she soon realized that there’s very little kids inclusive kids literature out there. “There’s definitely been a lot more inclusion in the young adult book world, but in picture books, the ones that are out there seem to center on holidays like Diwali, Holi, and Ramadan or other big events,” she told this writer in an earlier interview. “But our books should be about everything,” she said. “Why can’t there be a series of books on a girl of color,” she wondered.

Told through its 7-year-old protagonist, Anjali, the book broadly deals with an experience that’s universal — like kids dealing with bullying, and tells kids that they don’t have to change to fit in.

This past October, when Sheth was busy promoting President-elect Joe Biden and Vice President-elect Kamala Devi Harris, Sheth was reminded of her book’s ‘shero’ Anjali. It was around that time when Sen. David Perdue, a Georgia Republican who recently lost his Senate seat to Democrat Jon Ossoff, willfully mispronounced Harris’ first name. In the book, “Always Anjali,” the protagonist wants to change her name to Angie, when she struggles to find a personalized name plate for her bike.

Now, the New York-based mother of two, is ready with “Bravo Anjali!” – the second book in the series. It is set for a September 2021 launch. “The book couldn’t have come at a better time,” Sheth says, alluding to the historic candidacy and election of Vice President-elect Kamala Devi Harris, the first African American and Indian American woman in this post. In this book, Anjali navigates friendships and learns how to deal with being the only girl in the room. “It is a conversation we should be having with all our boys and girls,” as per Sheth. “It’s more important for boys to read this boy,” she adds.

The series is geared to readers between the ages of 3 and 10. In both her books, Sheth has drawn on her life experiences as well as the stories she hears from people she meets. “Everything I write comes from personal experience,” she says.”Stuff I have been dealing with all my life.” Those anecdotes and experiences are then put into a context that would be accessible for children. “Picture books are one of my favorite mediums of literature,” she says. “They are vast and have the ability to do so much – the format makes for some really special work. It forces you to pare down and hone in. Pick your words carefully. You need less but you need the text and the illustrations to mean more.”

While Sheth was writing “Bravo Anjali!” she thought about how much her generation had missed out on from marginalized communities. “I am deeply saddened by the fact that I know we have lost out on some stellar ideas and work, particularly from women and BIPOC (black, Indigenous and people of color), who were never given the opportunities to live to their fullest potential.”

Even the experiences Anjali faced in “Always Anjali,” were Seth’s. “I started my career in the late ’90s, when I was still battling producers about why I wouldn’t change my name,” recalls Sheth. “There were so few of us.” She remembers “a number of friends” who have changed their names, and some who have “lost jobs because of their names.” The idea behind writing “Always Anjali” was to make sure that the right message was conveyed to the kids, that they be proud of who they are.”

Another element that Sheth has added to her second book in the Anjali series is music. “I knew I wanted to incorporate the tabla (that was an easter egg at the end of Always Anjali!). As the story took shape, I talked to a few female tabla players I knew who gave me invaluable insight. The scene where Anjali’s mom’s friend assumes the tabla is her dad’s is straight from these players.”

But being an author is one of the many hats Sheth wears. An activist, the highly political and outspoken Sheth, spent a major part of last year doing outreach for the Biden-Harris campaign. She has continued participating in advancing progressive social causes with groups like Equality Now and the Representation Project. He has served in AmeriCorps (President Clinton’s National Service program), BBBS of LA, and is currently on the advisory board of Equality Now and serves as an ambassador for The Representation Project. She also regularly speaks on panels and forums internationally and delivers keynotes/talks at festivals and charity galas.

Sheth is best known for her role in Albert Brooks’ film “Looking For Comedy In The Muslim World” and for the cutting-edge film “ABCD” in which she played the lead role of an unbridled young lady, battling with the ties of family and convention. She was most recently seen in the HBO documentary “East of Main Street: Taking the Lead” USA’s “Donny” and the film “Grin,” which she also produced.

Theater Producer Vivek J. Tiwary to Adapt Will Eisner’s Graphic Novel ‘A Contract With God’ Into a Broadway Musical

She currently stars in “I’ll Meet You There,” a portrait of three generations of a Muslim-American family. Directed by Pakistani American Iram Parveen Bilal, the film will be virtually rolled out in North America from Feb. 3. The film was one of ten chosen from 1,305 submissions for SXSW’s narrative feature competition earlier this year before the spread of the coronavirus pandemic forced the festival’s cancelation. “The film is doing very well on the festival circuit,” Sheth says. “I’ll Meet You There” follows Majeed (Faran Tahir), a Chicago policeman, and his teenage daughter Dua (Nikita Tewani), a gifted ballerina, who are unexpectedly visited by Baba (Qavi Khan), Majeed’s long-estranged father from Pakistan. Majeed is given a career-making opportunity that he can’t turn down, but it requires him to use his father’s help to gain access to the local mosque, while Dua, under Baba’s guidance, begins to question her passion for dance.Sheth plays Shonali, Majeed’s wife.

Her latest feature film, “Hummingbird,” which she also produced, is currently in post-production. An indie drama written and directed by Tanuj Chopra, is based on a story by Sheth and Chopra, about a fallen superhero who gets possessed by the devil. Also starring Leonardo Nam, Hal Ozsan and Anil Kumar.

Whether it’s her own creations or a project that comes her way, Sheth is  always looking for ways to explore herself and stay challenged.” Other projects in the pipeline include developing a show she created for a major streamer, and working on an illustrated chapter book series for kids. There’s at least two more books in the Anjali series in the works as well.

Sheth says cancer has taught her to be purposeful; “to focus on how I spend my today, be more productive, more creative.” When she was first diagnosed with cancer, she was very angry. “When you are faced with your mortality at 44, you feel so vulnerable,” she says. But she soon realized that  being strong and healthy carries you a long way to get through. After her December 2018 diagnosis, underwent a double mastectomy in January 2019, followed by months of chemotherapy.

She was private about her diagnosis for quite some time. But in June, when her coincided with the six-month anniversary of her diagnosis, she felt it was time to speak up. On her Instagram handle, Sheth posted a video sans a wig. “It has been shattering and surreal to say the least,” she said. “It rips you raw. But here I am. Full of grief and gratitude. And still at it. Persevering.” After thanking her friends and family for their support, Sheth asked her followers to spread awareness about cancer.