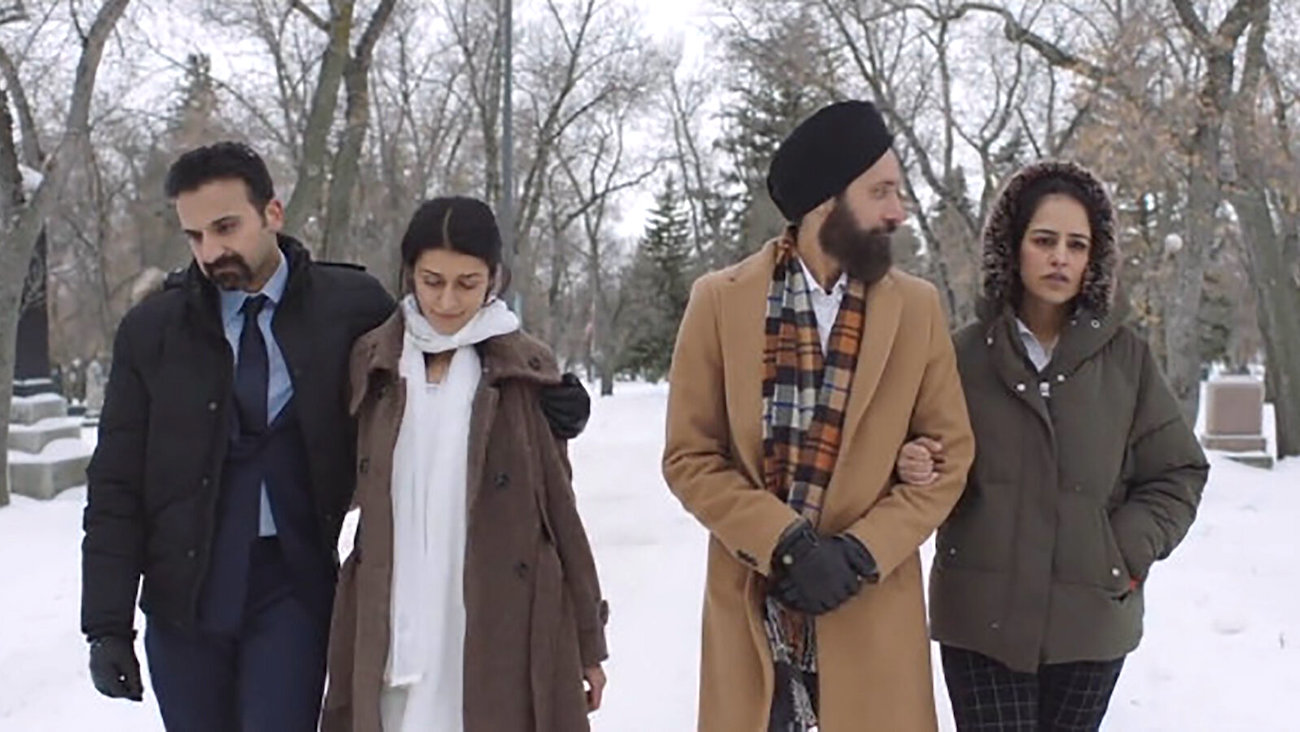 “Donkeyhead” is a 2021 Canadian comedy-drama film written and directed by a Sikh Canadian Agam Darshi. It is her directorial debut about immigrant family issues. It stars Darshi as Mona, a failed writer who has been taking care of her ailing father (Marvin Ishmael) for the last seven years. Ishmael plays the role of a Sikh grocery store owner with a dream of making it big in Canada. But he loses both his grocery store and his health. It is sad to see him as an invalid in his old two-story home on Victoria Avenue.

The home decor and picture of Guru Nanak reminds me of the 2002 romantic comedy “Bend It Like Beckham.” The grocery van parked outside on the driveway offers a silent testimonial to his life. Is this the fate of other grocery owners, who provide us the accouterments of making a home away from home? (It made me think). The old widower has four children played by Agram Darshi, Stephen Lobo, Sandy Sidhu, and Husein Madhavji.

They are a traditional Sikh family, and although the father does not speak much, we see an entourage of relatives and neighbors who hold prayer meetings in the family home to create positive vibrations to keep cancer from spreading. Mona, a confused second-generation Sikh Canadian writer, does not welcome intrusions into her caregiving and isolated personal life. But when her father has a stroke, Mona has to inform her siblings about his deterioration. The arrival of the other three (seemingly successful) children in a taxi to the father’s home in Regina Saskatchewan accelerates the narrative.

The story literally and figuratively skids on thin ice. Everyone finds fault with Mona’s actions and jumps on her for her incompetent decisions. She falls apart when she realizes that despite seven years of devotion to her father, the house is willed to her twin brother. Mona has a meltdown. The siblings relent a bit and have a few beers at a local pub (The Fat Badger in downtown Regina). In a unifying moment, several others join her in an impromptu Canadian national anthem singalong. A call for help of sorts. Wanting to be Canadian in the real sense.

“Donkeyhead” is a “coming of age” movie and exposes several issues faced by immigrant children with a middle-class upbringing: Family hierarchy, gender identity, premarital sex, strict religious norms, community acceptance, career choice, and general personal ease. If you are wondering why it is called Donkeyhead? You are not alone. I was baffled too but when I saw the father address Mona as “donkey” and then as she appeared after a fight with her siblings with a “donkey mask,” I got it. It was common in Punjabi families to label kids with acronyms like “donkey,” “pig” or “dog.” Often families ganged up on one person and chided them for their stupidity or inability to “keep it together.”

This seemingly inane but absurd custom may have a detrimental effect on children in their formative years. Somewhere Mona could not outgrow her childhood nickname and remained stuck in the role of a donkey head. This is her angst. For this reason and a bit of comic relief when the “urgent” need for ketchup to go with the pakoras for the diabetic priest takes precedence over sibling shenanigans, the movie deserves to be mentioned.