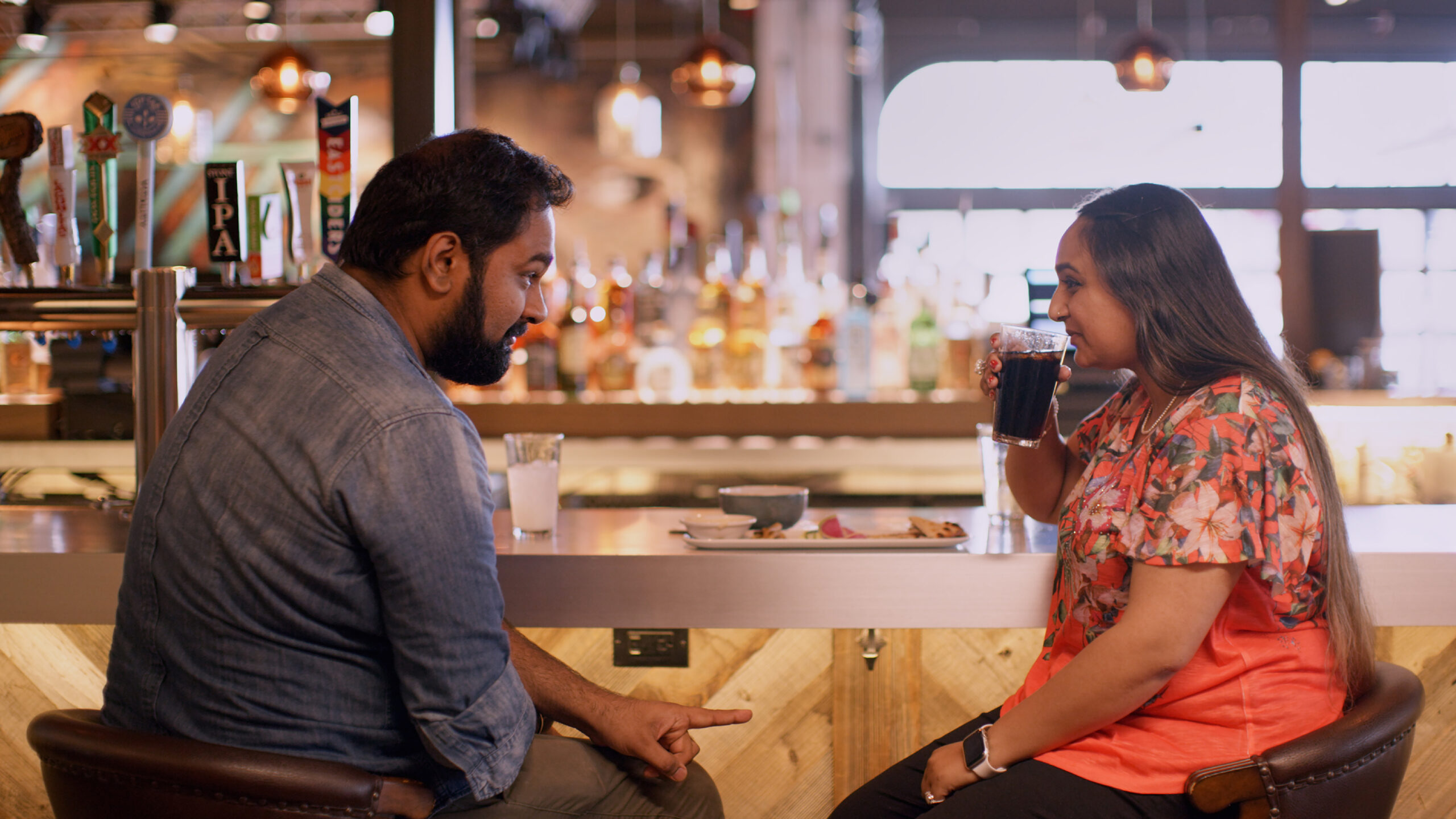 Netflix’s “Indian Matchmaking” is a blockbuster hit across the English-speaking world, if not beyond. It is understandable that the Baby Boomers and GenXers have been captivated by the series, many of whom may have undergone some kind of “matchmaking” themselves.

What about other millennials and GenZ? What did they make out of the series? Did their opinions differ from the older generations? Would they be attracted to a series which depicts a style of marriage that they won’t probably end up choosing?

The eight-part series, which premiered on July 16, follows Sima Taparia, a professional matchmaker from Mumbai, who travels across the U.S. and India, to help prospective brides and grooms find their ideal match. We meet a variety of people, and watch them navigate awkward first dates and meetings with the families.

The young adults this reporter spoke to watched the series out of curiosity and had diverse reactions to it. But they all agreed that the show propagated sexism, colorism, as well as caste and class biases. Some were angry with the lack of representation, and with age old stereotypes being brought to the forefront, and for others, it was an opportunity to understand the various aspects of arranged marriages that they weren’t aware of.

For Christina Paul, a senior at University of Connecticut, majoring in Molecular and Cell Biology, matching of the horoscopes, astrology and the face reading were fascinating; while for Pallavi Pathak, a business major and a junior at Babson College in Boston, it was a lesson in history about the Guyanese community.

“As an Indian American whose parents did not have an arranged marriage I did not know much about arranged marriage so I was able to learn a lot about the process and the various efforts that go into it,” Christina said.

“I thought the series was dressed up as ‘showcasing how arranged marriages worked’ and hence the creators felt justified in portraying colorism, casteism and unrealistic beauty standards,” says  27-year-old Meghna Baskar, a consultant in the Wealth Management FinTech industry. “Overall, I thought it was okay.”

Aditi Sinha binged-watched the series with her mother and her grandmother. For her, along with curiosity, the idea of watching someone one who looks like her on television helps. “It feels relatable,” says the 24-year-old Care Coordinator at Memorial Sloan Kettering Cancer Center.

More than anything else, it was the curiosity of knowing the final outcome of the couples kept most of them glued, despite not agreeing with the shows’ premise.

For some, the series seemed diverse, with the inclusion of Nadia, the Guyanese woman of Indian origin, or Vyasar, with a troubled childhood, or the highly ambitious Aparna, or Rupam, the single mother. And then there were those who couldn’t get past the stereotypes.

“I definitely felt that the show did its best to talk about diversity,” says Rishabh Midha, a junior at Purdue University in Indiana, studying Aerospace Engineering. “They took in people from all over the world and clearly showed that there are more progressive meetings when the boy and girl would meet on their own.”

Pallavi disagrees. “The first word that comes to mind when I think of this show is definitely not diverse,” she says, adding that the series has two sides. On the one hand there are “the more traditional families in India who wanted a perfect and ‘flexible’ daughter-in-law,” and on the other side of the spectrum  are “the more ‘modern suitors’ who were looking for independent partners.” Although people from different cultures and backgrounds were depicted, Pallavi says “there was no explanation about how exactly the culture differs or why that even matters.” However, “if the whole purpose of this show was to show diversity in the South Asian community, I do not think this was the show for it,” she observes.

Aditi concurs on the diversity bit with Rishabh, but has issues with how the series approached women. “Telling a divorced woman with a child that she should, off the bat, expect less or even worse proposals, because ‘that’s just how people are’ was unnecessary,” she says. “I’m sure Rupam had already felt the cultural pressure and judgement, and to have someone who you’re looking to for help say that is unhelpful.” Similarly, Aditi brings up Ankita, whose skin color and weight were brought up constantly. She was also “kept in the dark” that the guy she was meeting was divorced. “It seemed that even if the men presented in the show had issues, it was never held against them. They were never perceived as someone who was offering less, but the women were.”

And what did these youngsters think of Sima aunty, the eponymous Indian matchmaker? There was no agreement there either.

“Sima aunty is exactly the kind of person who perpetuates the stigma of color, race and caste in the Indian culture,” says Meghna. “She reminds me of a meddling Indian aunty who sticks her nose in other people’s business, giving them unsolicited advice on how to live their lives.” Meghna says that although she claims to be “progressive” Sima aunty doesn’t “emulate a shred of that virtue in her interactions, especially with women.” It is words like “flexible” and “compromise” which are used as “proxies for sentiments that the woman must give up her independence and her pursuits for the good of the family.”

Pallavi has a different take on  Taparia. “Honestly I liked Sima aunty,” she says. “She did not judge the client to their face for their preferences and truly did try to find everyone what they wanted,” she noted. “I know people had issues with the word fair-skinned being a positive characteristic, but unfortunately in India that is the reality. I do not think it’s Sima aunty’s job to end colorism.”

Then there is Rishabh, who found her to be blunt, but as the series progressed his opinion gradually changed. “Part of me liked the fact that she was helping people to find matches that would work. But I feel that she stressed on the wrong qualities.” Aditi faced a similar dilemma. “In the beginning I really liked Sima aunty, and by the end I was more so indifferent.”

Having grown up in the U.S., it was natural for these youngsters to relate to Indian Americans cast in the show. There were a few favorites: Ankita, “because she was unapologetically herself,” as well as Vyasar. There was unanimity, however, picking the least favorites. It was Aparna, and Akshay and his mother, Preeti. “My least favorite character was Akshay, because I couldn’t wrap my head around how he expected his wife to literally be his mom,” says Aditi.

However, the debate ensued on other aspects of the show. Did the series in any way depict a generational divide among Indian American kids and their parents? Rishabh thinks it did. “The parents are opposed to dating other divorcees, they have a huge pressure on marriage, and are very clear on where the potential match would be in their family,” Rishabh says. “While the kids feel more loose with the whole process. They want to go with the flow and see what forms more naturally than be thrown into something against their will.”

But Meghna feels the series did not focus so much on the generational divide. “It seemed to me that both the child and the parent were eager to get the ball rolling on the wedding,” she says. “I would have liked to see some more representation in non-binary individuals and a divide between parents and child on sexuality,” she says. “I think there is nuance that the show could have tapped into — showing the isolation of being gay in an Indian family, that it frankly ignored.”

Pallavi feels that a divide did exist, but it was between Indian kids and their parents.  “The most prevalent example of this was Akshay,” she says. “Even though he listened to his mom and lived his life how she wanted, when it came to marriage he still wasn’t comfortable. There clearly seemed to be something in him that wasn’t ready, or didn’t want to be.”

Aditi says as an Indian American, she could relate to some of the pressures the characters in “Indian Matchmaking” went through, not necessarily relating to marriage, but of assimilation in general. Both Aparna and Vyasar mention their comfort in dating non-Indians.

“I believe a lot of first generation Indian American children feel this burden,” she says.  However, she thinks one can’t “truly assess this internal divide” until they’re older. “It’s a tricky line to tread, being torn between two cultures, but in my opinion I’m lucky I have the ability to be a part of two cultures.”

Christina chimes in. “As someone who grew up in America, there have definitely been times where I had to compromise on certain things due to my culture,” like the types of clothes she wears, dating or going out.

Meghna has a different view on this. “I am not sure if the expectation of adhering to my parents’ old beliefs exists, but personally I do not do this.” As independent, career-oriented young woman, she says she chooses to live her life according to her own virtues — “those of hard work, honesty and kindness to all,” she says, and adds that she believes that “being Indian is not mutually exclusive” from being American. “I am free to date and marry whomever I so choose or remain single, if that fits me better. My parents would accept any of those decisions as long as I think deeply about it.”

Marriage is not on the horizon for most of those featured in this story, but what are their opinions on arranged marriages? Is it something they would like to explore? Most are up for it, though it could be the last resort, much like the characters in “Indian Matchmaking.”

“I personally do not understand never meeting your partner before marriage,” says Pallavi “I do like the idea of arranged dating as nothing is binding,” she adds.

Aditi is on the same track. “I think there’s a ‘modern’ version of arranged marriages nowadays where parents just introduce two potential partners, and they take it from there to see if this is something that would work,” she says. “I would consider this option, because someone has to introduce you to your future spouse at some point, right?”