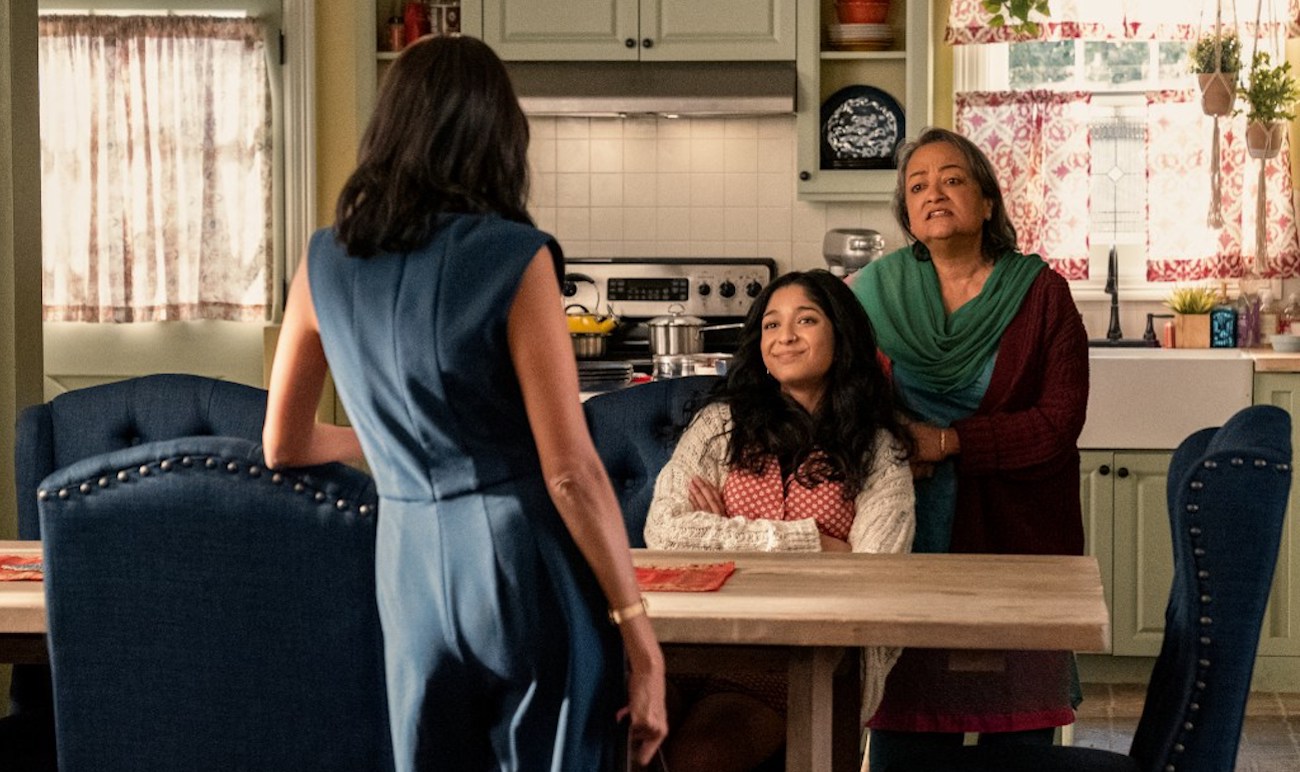 The second season of Mindy Kaling’s coming-of-age Netflix drama, “Never Have I Ever,” was released in July. While it primarily deals with its protagonist, Devi (Maitreyi Ramakrishnan) and her challenges as an Indian American teen, the second season introduces us to new characters like Nirmala Vishwakumar, Devi’s paternal grandmother, played by California-based actress Ranjita Chakravarty.

Devi’s mom Nalini (Poorna Jagannathan) goes to India to plan their move there. While in India, she changes her mind and returns to the U.S. with her mother-in-law. Nirmala instantly makes her presence felt in the all-female household. She is strict, but also very loving, and finds herself playing the role of a peacemaker in the Vishwakumar home.

In a Zoom conversation with American Kahani, Chakravarty spoke about her character in the second season and her experiences on set.

A regular in the Bay Area Theater scene, both as an actor and director, Chakravarty was alerted to an open audition for the role of Nirmala by a friend, who told her “they are looking for old people in Season 2.” So she applied with a headshot and a resume, followed by a self-tape. A few days later, she got the role of the grandmother.

This being her first Hollywood project, Chakravarty, who never had an agent and always did self-representation, was instantly made comfortable by her co-actors. “I was the new person on set, everybody knew everybody, including the crew, but I felt like I slid right in,” she says, adding that “it is something to be said of my co-actors,” like Maitreyi and Poorna, whom she mostly interacted with.

There was Richa Moorjani as well, who came on the set a few episodes later. “We didn’t have a chance to see everybody, because of covid, we would just do our scenes and leave,” she says. “I think I didn’t have any expectations other than it was going to be a very professional show. And in terms of everything, it exceeded my expectations. So I am very lucky.”

Chakravarty was all praise for Maitreyi, the breakout star of the show. Despite her theater background and experience, there were times when Chakravarty was a little hesitant about her performance. Although “so much younger” than her, Maitreyi would assure her. “Ranjita, you are just killing it — and don’t even worry about it,” she once said, adding, “And if you are doing something wrong, somebody will tell you.”

Chakravarty, who “wasn’t 100 percent confident because it was a new medium” for her, says she “felt really thankful that she [Maitreyi] went out of her way to tell me that and put me at ease.” Poorna was “sweet” and “always helpful,” Chakravarty adds. “I never felt like an outsider. They embraced me into their fold.”

Almost every episode had a different director, Chakravarty notes, adding that she interacted with four or five of them “who were all really amazing.” Lang Fisher was always there on set and Mindy Kaling came once when Chakravarty was there. The two had a “very short interaction,” Chakravarty recalls. “She said she liked my work, or something to that effect, I can’t really remember. She said I was funny or something like that.” The shooting was held in Los Angeles, in the Universal lot.

There were many facets of Nirmala’s character that appealed to Chakravarty. Noting that Nirmala is not a stereotypical grandmother, she says she loved her modern outlook. At times I felt like she was almost more modern than the daughter-in-law.” She gives an example. “When Devi is getting annoyed with the mother because her mother is seeing somebody, I really like the way the mother-in-law stood up for the daughter-in-law, even though she might be replacing my son. On the other hand, a stereotypical grandmother would react differently.” Chakravarty says she was “channeling” her own mother-in-law, “who’s passed away, but she was always supporting me.” She likes that the grandmother “was shown as a friend, but was always firm. She tells Devi when she’s meant to be told, but she has an innocence to her.”

And along with her character, Chakravarty likes the entire premise of the series. “What I liked is that they showed an Indian American teenager having the same problems as anybody else. If she was shown as a nerd and everything was perfect, that would be stereotypical,” she adds. “But the issues Devi deals with, could be faced by any teenager.” She especially highlights how the issues of dealing with grief and loss were also brought to the forefront.

But that said, she is quick to point out that there are some cultural nuances as well, like showing how Indian mothers are for education. Noting that “those might seem stereotypical,” she mentions being “surrounded by Indians in the Bay Area who talk like that.” According to her, the cultural nuances shown in the series was a true depiction.

However, at the same time, she is aware that there’ll always be someone who will find some shortcomings in the portrayal of Indian Americans or Tamilians. “But we have to keep in mind that there are so many diverse people within India that it is not possible to represent each and every one of them or their problems.”

Calling “Never Have I Ever” “a very cleverly and well-written series,” she congratulates Mindy Kaling and the writers and Lang Fisher “to have produced something like this which gives us an opportunity.”

The New Delhi-born and raised Chakravarty has been working as an internal auditor with Stanford University for the past 22 years. Prior to joining the university, she worked with Coopers & Lybrand, one of the oldest accounting firms in the U.S. She’s also worked with a couple of banks like State Street Bank and Bank of Boston.

When she moved to the Bay Area, she initially pursued Odissi dance and then began acting in plays. “So I was always in the performing arts in some way or the other.” She then started acting with Natak, an Indian theater company in the Bay Area. She did several plays with them. She also acted and directed with another Bay Area company called Enacte. Her latest directorial venture — “Square Root Of A Sonnet” — is a production of the Bay Area Drama Company. For roughly two decades, Chakravarty has been actively involved in theater, as well as featuring in some shorts and feature films. Her first film was “Perfect Mismatch,” with Anupam Kher and Boman Irani.

While she doesn’t know if she will return in the third season of “Never Have I Ever,” she is basking in the adulation and love she got as Nirmala. “A lot of people found the second season better because the characters were more developed,” she says. While she hopes that the pandemic doesn’t affect theater, she cannot overlook the wide reach of a streaming platform like Netflix. “Over 40 million people saw the show at the same time,” including her sisters in India,” she says. “So the global reach is amazing and that’s a different thing; you become known globally., rather than in your own little circle.

She hopes that “Never Have I Ever,” becomes a launchpad for more South Asian content. “There are many stories to be told.” And she credits Mindy Kaling for this trailblazing. “One of the reasons my kids introduced me to ‘The Office,’ was because of her,” she recalls. “Of course, her character looked Indian, but the relatability and appeal were universal. She was part of that whole assimilated culture which I think made her so good,” she continues. “And of course she has an Indian heritage, so she goes for that.” As a director herself, she highlights the importance of good writers like Kaling. “We have to tell a story and we have to have writers who can tell these stories. I think writers just have to step up and tell the stories and make it testy for us actors to tell those stories.”

Chakravarty lost her husband in 1997; he died of a heart attack. “In a way it’s a very surreal thing when I saw the theme in ‘Never Have I Ever,’” she says. My husband also suddenly died and my kids had a very hard time coping with the loss. A single mom for almost 25 years, Chakravarty says it has “taught her a lot; how to deal with grief and loss. How my kids coped with it was also a lesson, because I never faced anything like this before.”