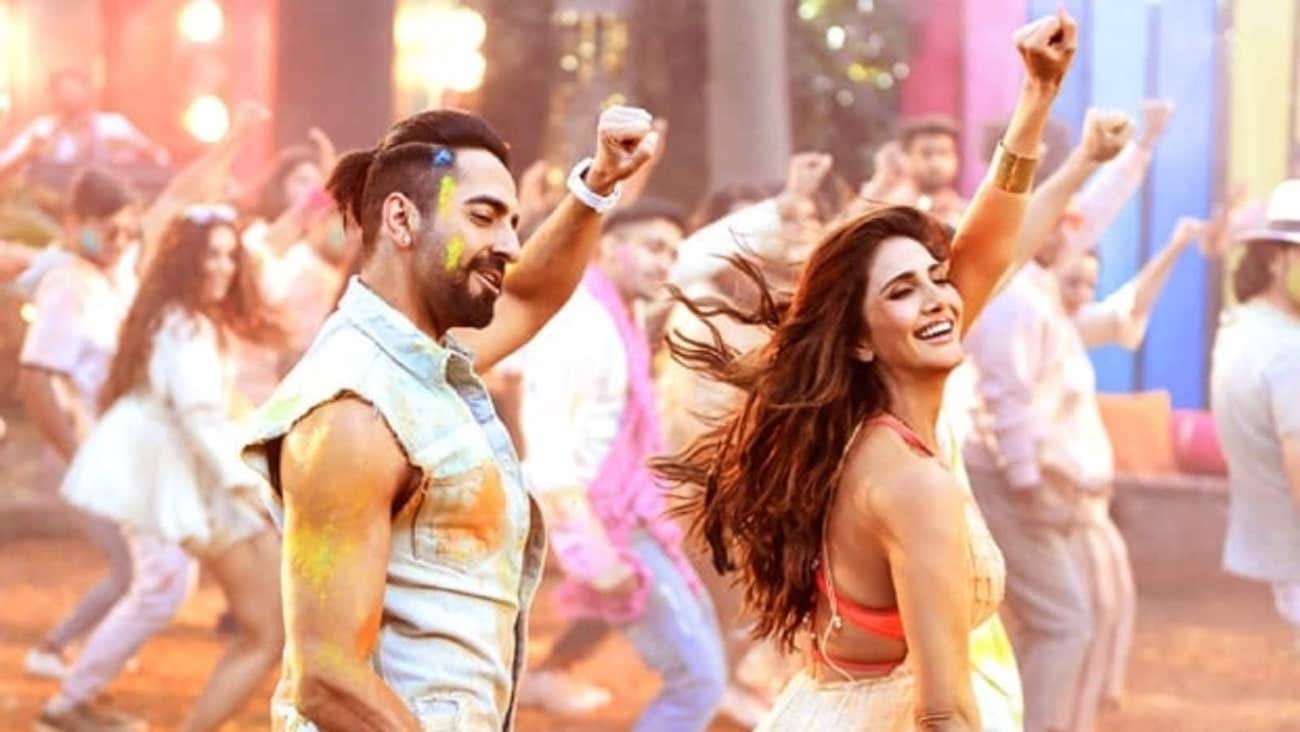 India is moving inch by inch to accept transgender people as part of mainstream society. Have you watched “Chandigarh Kare Aashiqui” on Netflix? It is a feature film documenting the romance and promise of a lifelong partnership between transgender and cisgender. Way to go!

While skimming through the list of Bollywood films on Netflix, I came across this enticing title. I was unsure if I should watch it but still wanted to try; I am glad I did. It is a paradigm shift in conceptualizing a typical love story in the ubiquitous Bollywood genre. This film was released in India in December of 2021 and is streaming on Netflix.

Directed by Abhishek Kapoor, “Chandigarh Kare Aashiqui” focuses on a sensitive issue like gender identity. The film is not just a passing remark on being transgender but makes it the main focus. Like a typical formulaic Bollywood plot, it starts as a light-hearted comedic love story: boy meets the girl, falls in love, then ensues conflict leading to separation, and all ends well with the final reunion. Then the film departs from the formula — the girl in love reveals that she is transgender. All hell breaks loose. The plot thickens; the hypermasculine bodybuilder boy is full of rage. Ultimately, he realizes his inflated masculinity and understands the precarity of the transgender Mannavi.

The hero, Manu, played by Ayushmann Khurrana, is a rustic, ponytailed, 30-year-old gym owner and bodybuilder. He belongs to a typical small business-owning Punjabi family with a widowed father in the sanitary equipment business and two nagging and loving sisters. Manu’s education is limited, and he aspires to be the city’s most muscular man by winning its annual bodybuilding competition.

How do the boy and the girl meet?

Maanvi, a dazzling, beautiful, sophisticated, well-educated young woman, brings publicity and an excellent name to Manu’s struggling gym when she joins as a Zumba teacher. Manu, who has followed brahmacharya for the last 30 years focused on bodybuilding, suddenly loses his poise and is hopelessly in love. Mannavi reciprocates. But she wants to tell him something for which he has no ear. Her love smites him.

Maanavi, played out by Vaani Kapoor, is born a man but always feels like a woman from the inside. Growing up in an army family, she is financially independent, lives alone, and makes her own decisions. Her mother has not accepted her identity, whereas her father, an ex-brigadier, is shown to be her only pillar of support. One gets a glimpse of Mannavi’s inner world — deep vulnerability in her gestures, eyes, and expressions. She plays out the trans character beautifully.

In one scene where Maanvi says, “Main ek ladke ke shareer mein paida hui thi, par hamesha ladki thi.” She explains that she is a trans woman — that she was always a girl but born in a male body. A transgender scriptwriter, Gazal Dhaliwal, says, “this sentence defined transness for me, that even before she had her surgery, she was a trans woman.”

There are many instances where the tension, conflicts, and questions about being transgender are touched upon. For example, Mannavi goes to get a laser on her face. Randomly she is taking pills. One has to assume they are pills for the hormone. In one scene, a hijra greets Manu and Mannavi. It was a clever way of presenting an educated, financially independent transgender woman vis a struggling hijra on the streets.

Lana Patel, an Indian and Black trans woman activist from Los Angeles, thinks that it is brilliant Mannavi has a very supportive father because generally, the mothers are the supporting ones. In a scene, Mannavi was riding a bike and on the phone with her father, who says, “Oh, we’re going to a wedding.” She asks, “Am I invited? No one even told me about my cousin’s wedding. Does mom even want me there?” Dad is lying: “Yeah, of course.” She knows that her father is covering her back. He says, “You’re the best son” in another instance. Mannavi replies, “No, I’m your daughter.” He says, “You’re both my daughter and my son.” This statement challenges the accepted gender binary. A father taking Mannavi as his son and daughter is a welcoming change in a patriarchal society, where the gender gap is ever-widening. India ranks 140 out of 156 countries in the 2021 Global Gender Gap Index (GGI).

The story is written by Simran Sahani, mother of a trans daughter. The film takes us into Mannavi’s inner world. When she was checking social media on her phone and found her ex-boyfriend getting engaged, she was lonely and full of self-doubt. Patel says she knows how it feels. “Marriages for trans women are rare, and you see your boyfriend break up with you to get married to a cisgender [woman],” Patel admits that the film brings deja vu for her. She has gone through this experience. Mannavi was worried whether her relationship with Manu would weather the truth of her identity. She was living in the moment. Patel says, “So many of us have lived in the moment because we find it hard to deal with the harsh reality.”

The bond between Manu and Mannavi grows stronger — he confesses that she is the best that could have happened to him and has made him the happiest. She is everything to him. He proposes a life partnership. “Oh my god, you are world-class; you are the best. You are different; there is no one like you. You are amazing; marry me!” Mannavi reveals that she is not born a woman but has become one. Manu asks, “hat?” She explains that she has undergone a sex change operation and has become a woman physically. He goes berserk. Suddenly nothing is the same. In one split second, when he finds out, it is all over. Patel says, “I dated quite a few Indian Punjabi men, and I know their God-like attitude. It resonated with me. Even the way his body language was with her, the way he was grabbing her, talking to her”. Manu wanted Mannavi to leave town. He never wanted to see her ugly man face again. It was very realistic the way Manu’s toxic masculinity was portrayed.

In one scene, Manu runs up to Mannavi, asking for her help. He is angry and hates her. He wants her to move out of town for the sake of his family. They want Manu to marry her. They do not know her trans identity. Mannavi becomes serious and tells him, “You wanted me to tell you the truth. Now you tell your family the truth why we can’t be together and why you want to break up with me. I gave you the truth, but you can’t handle it now”. Patel says it was so beautiful to see Mannavi proclaiming her womanhood.

One relevant criticism comes from ‘Yes, We Exist,’ an LGBTQIA+ community forum in India. It criticized the film’s hero, Khurana, for his skin-deep representation of gender fluidity. They accuse it of a transphobic film. Patel disagrees. She and her trans friends understand that Khurana is a giant star and want to capture the audience. The film’s turning point is to reach out to those macho men in a patriarchal culture to change their mindset about gender and sexuality.

The trans role played by a cisgender woman has been subject to criticism. Patel says that it is more important to treat this film as an awareness booster to respect the identity of a transwoman in India and the Indian diaspora. She says, “this is a good start. Sometimes it takes a big name and a familiar face to convey the necessary message initially. Once society is open and supporting films about trans characters, we can cast trans people to play these roles. I think that was the takeaway for me.”

My reaction is that this film is a correction to the invisibility of trans people in movies. Bollywood is the producer of the most significant number of films, but transgender identities have never been considered even though 4. 8 million people self-reported as transgender in the 2011 census.

Movie critic and analyst Anupama Chopra says that director Abhishek Kapoor interviewed several people to study the trans psyche and lifestyle, and it shows in the film. Of course, it is a commercial Bollywood film, and the story is told from the hero’s perspective. Chandigarh Kare Aashiqui is a conversation starter about a taboo subject, and it takes a sensitive mind to take a plunge. The film is not without flaws, but its message is very progressive.

Patel says, “If there is a part two, I would love to see it through Mannavi’s lens, and they get married.” She thinks it would be beautiful to see a trans woman getting married. I have not seen an Indian trans bride. Finally, there is a film where the trans woman is not made fun of but is celebrated.

Annapurna Devi Pandey teaches Cultural Anthropology at the University of California, Santa Cruz. She holds a Ph.D. in sociology from Jawaharlal Nehru University, New Delhi, and was a postdoctoral fellow in social anthropology at Cambridge University, the U.K. Her current research interests include diaspora studies, South Asian religions, and immigrant women’s identity making in the diaspora in California. In 2017-18 she received a Fulbright scholarship for fieldwork in India. Dr. Pandey is also an accomplished documentary filmmaker. Her 2018 award-winning documentary “Road to Zuni,” dealt with the importance of oral traditions among Native Americans.