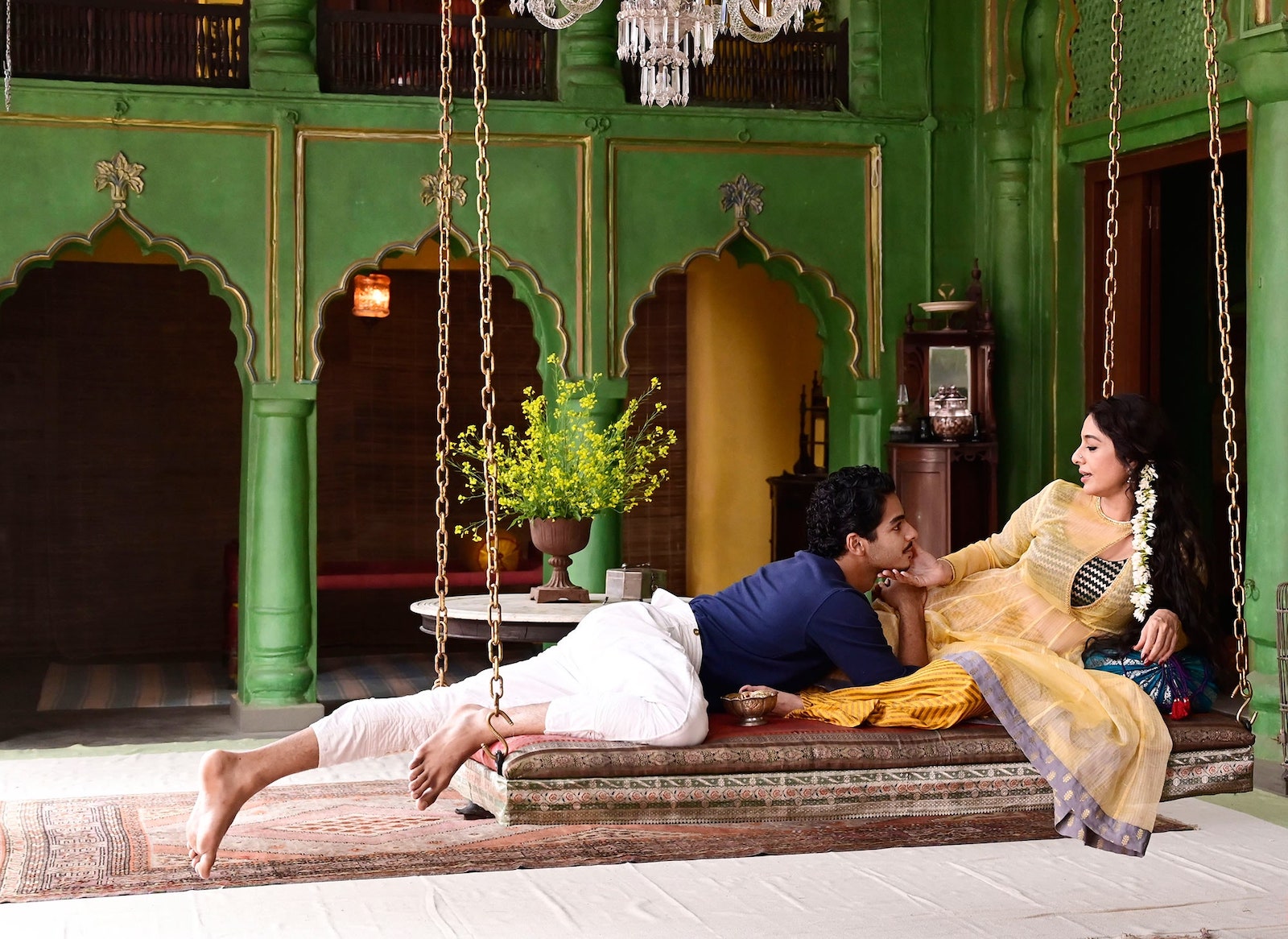 Director Mira Nair has often said that her BBC series “A Suitable Boy” is “The Crown in brown,” referring to the Netflix series “The Crown.” Nair says her series is as “magnificent” as “The Crown,” with a similar reach, but with a significantly smaller budget.

And despite the small purse, Nair and Welsh writer Andrew Davies’ adaptation of Vikram Seth’s “A Suitable Boy” shines through, for most part, with a stellar cast and performances and stunning locations. Nair has directed all but one episode; handing over the reins to Shimit Amin for one.

Nair told the New York Times that the story of “A Suitable Boy,” is personal. “The main reason I wanted to do it was to make a mirror to the world that we were farther and farther away from.” She said the 1950s was “a secular time and a time of real idealism, taking from the English what we had known, but making it our own.”

Through four families — the educated Mehras; the cosmopolitan and worldly Chatterjis; the politically connected Kapoors; and the genteel, Muslim Khans, “A Suitable Boy” offers several different portraits of the anglicized Indian elite, the newly liberated Indians, who were free from the British, but were English in their ways — reading Shakespeare or Keats, fox-trotting in clubs, sipping fancy whisky and wine. Bhadralok to boot.

And the six part series does justice to that era, blending politics, ambition, love and loss. The series is currently streaming in North America on Acorn TV.  With a slow start, the series picks up pace by the third episode and proves to be both engrossing and satisfying. The last two episodes, with its intertwined plots, twists and cliffhangers, seem rushed.

At the core of it all is the free-spirited Lata Mehra (newcomer Tanya Maniktala), whose overbearing mother Rupa Mehra (Mahira Kakkar) begins her search for a “suitable” match for the 19-year-old. Torn between family duty, the excitement of romance and inspired by rebellious Western writers and daring new ideas, Lata is determined to embark on her own journey of love and self-discovery as she decides her own future.

Lata’s romance flourishes among India’s political and historical backdrop. We see her struggle with her feelings with each of them, showing restraint when necessary, and at times letting her emotions flow.

Her interactions with her lovers and her internal conflicts seem real, and never appear to be forced, and is nicely juxtaposed with what the new nation is going through. As India is choosing its new government in the 1952 general elections, we see Lata making the difficult choice of choosing a life partner. Even the controversial kiss between Lata and Kabir in a temple in central India, did not seem forced and very much blends with the narrative.

Connected to Lata through their siblings’ marriage, the charming and passionate but directionless Maan Kapoor (Ishaan Khattar) is determined to enjoy life to the fullest. His behavior has been hugely disappointing for his father, the progressive Revenue Minister Mahesh Kapoor (Ram Kapoor), who can’t let anything unbalance his political career at a crucial moment.  However, when Maan becomes infatuated with the glamorous yet much older singer and courtesan Saaeda Bai (Tabu), the consequences could be catastrophic. His best friend is lawyer Firoz Ali Khan (Shubham Saraf), son of the wealthy Nawab Sahib of Baktar (Aamir Bashir).

What works for the story is its stellar cast which is a joy to watch. It’s as if each character was created for that particular actor. Tabu shines as the seductive courtesan Saeda Bai, with her exquisite shararas and her impeccable Urdu. The versatile actress made her international debut in Nair’s 2007 adaptation of the Jhumpa Lahiri novel “The Namesake.” She shares most of her scenes with Maan, played by the very talented Khatter. With just a few films under his belt, Khatter is brilliant in each and every frame; whether it’s the ease in his scenes with Tabu, a hint of shame in his eyes when he’s berated by his father, or the visible rage when he finally finds his calling in a remote village or the sense of relief he feels as the series ends.

There are other characters who succeed in adding depths to the fabric of the story. Particularly endearing is Shahana Goswami as Lata’s sexy, scheming sister-in-law, Meenakshi Mehra nee Chatterji who is bold, beautiful and brazen. Geeta Agrawal Sharma as Mrs. Mahesh Kapoor is another actor who makes an impact in a small, yet powerful role. Then there is Lata’s brother, Arun Mehta (Vivek Gomber), with his accented English and British mannerisms and dressing style, suspenders et al, and his older sister Savita (Rasika Dugal) and her husband Pran Kapoor (Gagandeep Singh Riar), who is Maan Kapoor’s elder brother.

In previous interviews, Nair has mentioned how these actors, whom she called old friends, have previously worked with her and couldn’t say no to her. “Even Vijay Raaz, who is now a big star, did two scenes for me, memorable scenes,” she said. “Or Manoj Pahwa. These are extraordinary actors who just came and lit up the screen. That was the real joy; to see Shahana Goswami completely sparkle without any inhibition and with great skill.”

The New York Times, in its review, notes that when “A Suitable Boy” premiered in Britain, “it was widely praised in the mainstream press as a milestone in representation on the BBC.” However, South Asian critics “were less kind,” the Times said, “focusing on the mannered English dialogue and overly enunciated accents, with particular focus on why an 84-year-old Welsh writer had adapted this iconic story about the birth of modern India and a young woman’s romantic awakening.”

Although many things have changed in the seven-plus decades since India’s independence, the political and societal overtones in “A Suitable Boy,” feel as relevant today as they did then. The Hindu-Muslim discord, the prodigal son, the courtesan with a secret, the emotional rigging of elections, he defeat of an honest politician, the tussle between the landlords and the poor farmers, seemed to fit in India’s landscape even today. Not to forget desi mothers’ single-minded determination to get their daughters married.

The series doesn’t shy away from depictions of violence like a scene where a mob chasing Firoz after a Muharram procession, and threatening to kill him for his Muslim faith; or a lovesick man who takes his own life, “but Nair abstains from tipping the story into cultural, religious, or gender-based exploitation,” Roxana Hadadi writes on RogerEbert.com. “She handles all these contrasting ideologies with an even hand, considering in each subplot the most appropriate path forward for these characters.”

There are instances when Nair aptly highlights societal pressures and taboos. Both the novel and miniseries hint that Maan and Firoz have a relationship that might be more than strictly platonic; but Nair chose not to explore that taboo relationship further. In one scene, Lata has to fend off the sexual advances of an older male relative. But while she is disgusted, she is still painfully bound by tradition; she lacks even the language to share what happened to her with those closest to her.

For those who read the book, the series may seem like a hodgepodge of too many plots in a rather fast-paced setting. I remember reading the book, as a teenager, taking my time to savor the 1,500-page paperback edition, reveling in each plot and each character.

Although Nair, the queen of adaptations (“The Namesake” by Jhumpa Lahiri and “The Reluctant Fundamentalist” by Mohsin Hamid) leaves out some of the nuances and a few of the book’s 110 characters — she is able to capture the essence of the original book – the mood, the sublime silences and the quiet melancholy.

Despite high-value production values, the stellar cast and performances, and stunning locations – from the dusty markets of Calcutta and Lucknow, to the fictional university town of Brahmpur, the series feels rushed at times. It deserved at least 12 episodes. After all, Seth’s novel is one of the longest books in English.