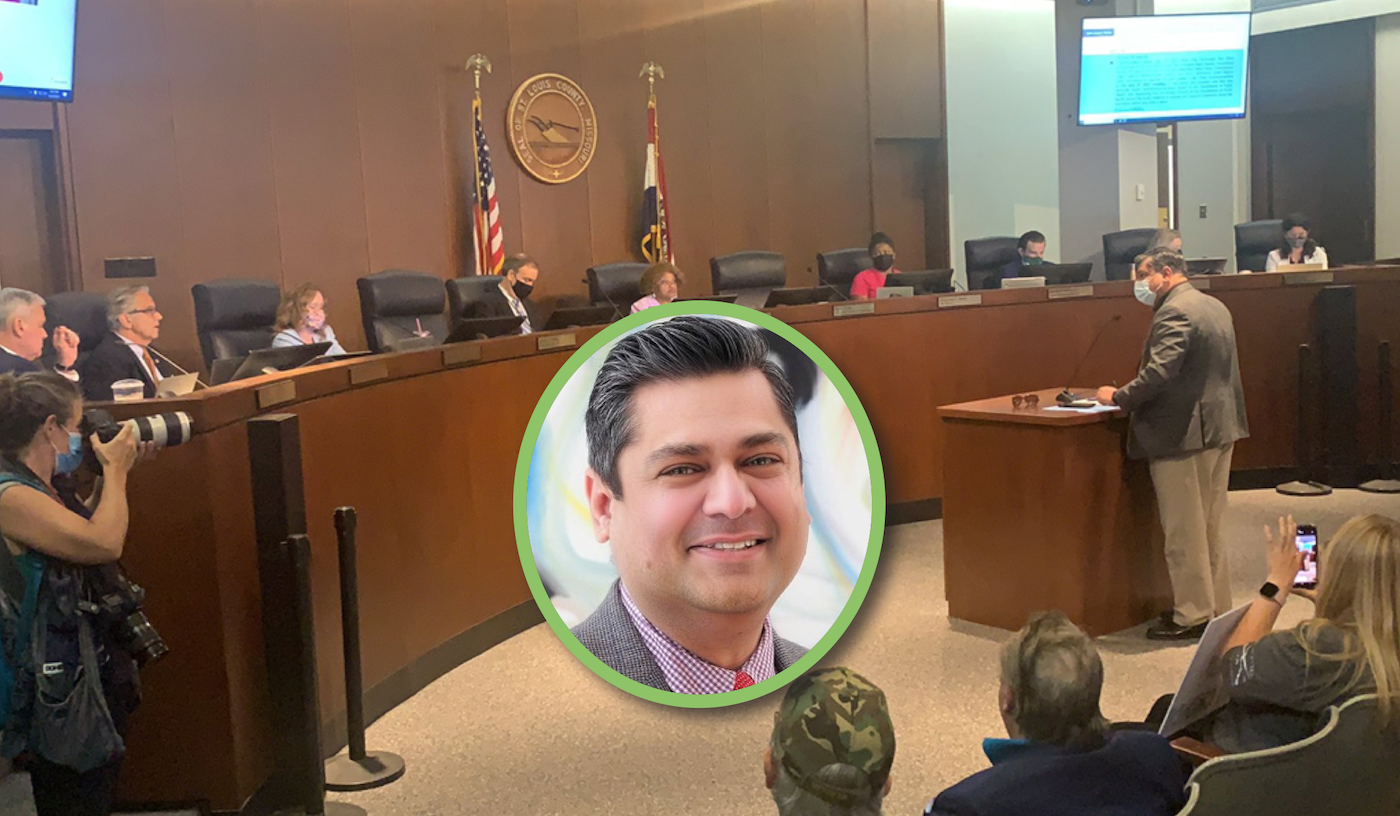 Dr. Faisal Khan, director of the St. Louis County Department of Public Health in Missouri, says he faced racist provocations from Republican politicians for speaking in favor of a mask mandate during a county council meeting earlier this week. In a letter sent to County Councilwoman Rita Heard Days a day later, the Pakistani American writes about his experiences after his speech.

“After my presentation was completed, I tried to leave the chamber but was confronted by several people who were in the aisle. On more than one occasion, I was shoulder-bumped and pushed,” reads the letter posted on RiverFront Times and shared widely on Twitter.

“As I approached the exit and immediately outside the chambers, I became surrounded by the crowd in close quarters, where members of the crowd yelled at me, calling me a ‘fat brown c***’ and a ‘brown bastard.’ After being physically assaulted, called racist slurs, and surrounded by an angry mob, I expressed my displeasure by using my middle finger toward an individual who had physically threatened me and called me racist slurs,” Khan wrote.

Khan admitted expressing “his displeasure” by using his middle finger “toward an individual who had physically threatened me and called me racist slurs.” He said he wished he had not reacted that way because it risked distracting people from the public health issue at hand.“I have to say, however, that when faced with the racist vitriol that Councilman Fitch has been privately and publicly stoking against me since my appointment, I cannot say I am sorry,” he wrote.

While he remains “open and willing to brief the council on public health issues dealing with COVID-19 and the other important challenges” in public health in St. Louis County, Khan requested Heard Days that she “take appropriate steps to investigate these matters, prevent similar events from happening in the future, and ensure that a safe and orderly environment be created for any future testimony me or my staff are asked to provide to the council.”

Khan, 48, was hired by St. Louis County Executive Sam Page in February to run the government’s department of health. was most recently CEO of the Samuel U. Rodgers Health Center, a federal facility in Kansas City. He previously held positions in St. Louis County’s health department from 2010 to 2018, first as director of communicable disease control services and later as the department director.

Page told the St. Louis Post Dispatch that he backed Khan after the letter’s release. “These actions against Dr. Khan are troubling and under investigation,” he said in a statement to the paper. “The behavior he has detailed is shameful and cannot be tolerated.”

Page’s office has also launched an investigation into Khan’s allegations of what transpired at the July 27 meeting. “We’re not going to ignore this,” Page spokesman Doug Moore told the St. Louis Post Dispatch. “His safety is a priority of ours, we want him to feel safe, and currently, he doesn’t.” Similarly, Heard Days also told the paper that she would open her own probe.

The St. Louis Post Dispatch reported that Khan spoke at the July 27 meeting “as the council was considering a move to terminate the mask mandate as unlawful and unnecessary, which it would do despite the rising threat of the delta variant.” As per the report, “dozens of people, some of whom held signs with anti-mask messages,” attended the meeting “to cheer on the action and jeer the mandate’s defenders.”

The meeting ended with the council voting 5-2 to strike down the mask order, according to NBC affiliate KSDK of St. Louis. However, Page said that the mandate would stay in effect. “A lawsuit was filed to challenge the order and is still pending,” the news station reported.

Missouri ranks fourth nationally in the most new cases per capita in the past 14 days, according to data collected by Johns Hopkins University Center for Systems Science and Engineering.

Many took to Twitter to support Khan. “I believe Dr. Khan & I stand with him,” tweeted County Councilwoman Lisa Clancy. “There will be accountability.”

Filmmaker and speaker Aisha Sultan, a syndicated columnist at St. Louis Post-Dispatch wrote: “Dr. Faisal Khan is a respected public health official and a friend. He’s doing his best to save people’s lives. Those who showed up to shout racist slurs at him are ingrates and an embarrassment to the entire region. Shame on you.”

Actor Laura Lee tweeted: “I stand with Dr. Faisal Khan. “Read what he faced last night. This makes me so angry and sad.”

Writer and journalist Abdullah Shihipar also took to Twitter to support Khan. “I truly appreciate every public health official who has been calling for what is necessary particularly in areas of the country where they face hostile political opposition. some have been fired for this. I wish the public health establishment did a better job of supporting them.”