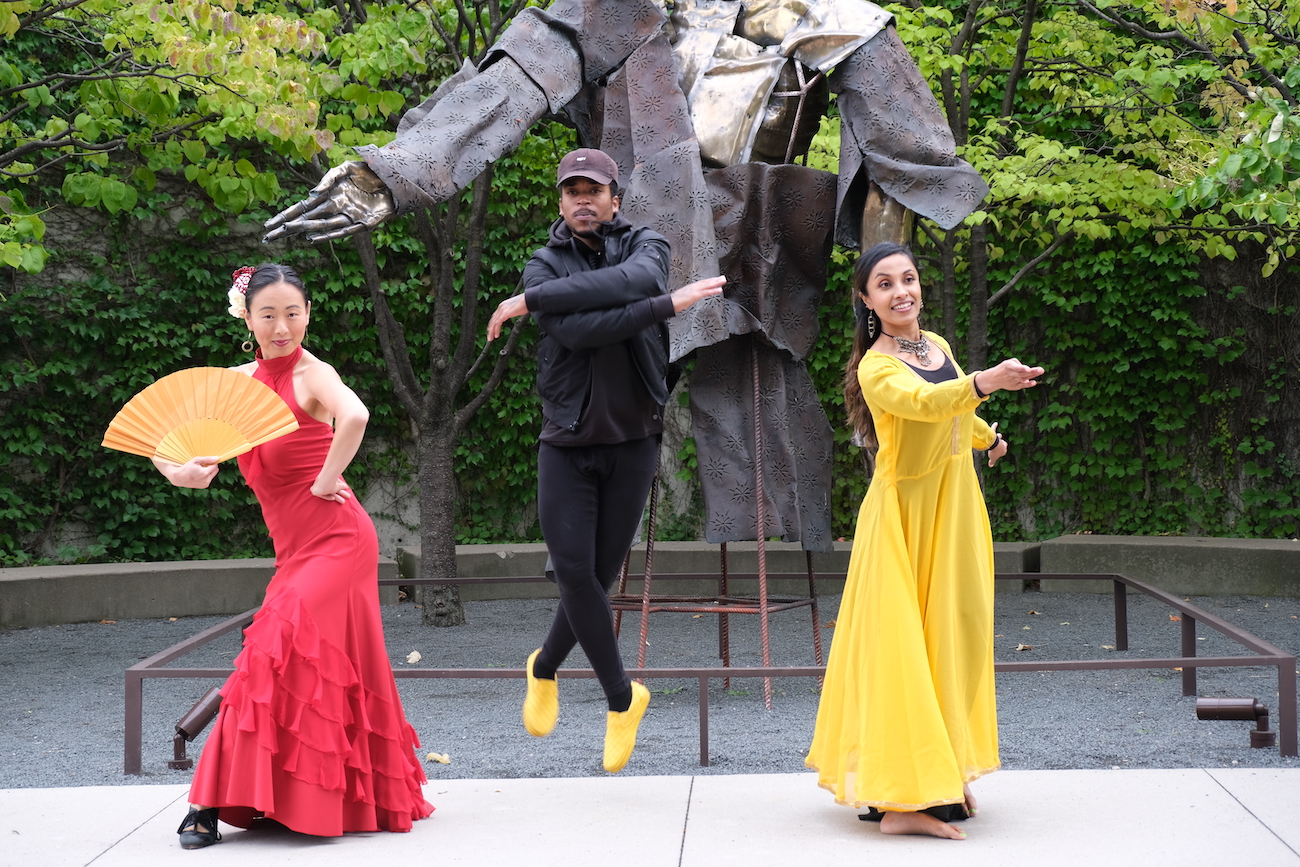 Take the activism and the poetry of the famous rebel poet of Bengal Kazi Nazrul Islam, the choreography of the doyen of Kathak dance form and Guru Shri Birju Maharaj’s disciple Rita Mustaphi, artist and playwright Ifrah Mansour‘s poems and the music of famed Minnesota musician J.D. Steele and mix it all. You get a magic potion – a magical moment of movement and verse that is unparalleled in its relevance to the present and association with the past.

From the repertoire of Katha Dance Theater (KDT) comes yet another scintillating performance — the world premiere of “Shaamya – Of Equality” that opens on Friday, November 19, and runs for three days only at the Park Square Theatre in St. Paul, Minnesota. Choreographed by Mustaphi, KDT’s Artistic Director, it features original poetic contributions from artist and playwright Ifrah Mansour. According to Mustaphi, the latest offering is inspired by the poetry of activist Kazi Nazrul Islam (1899-1976).

“Shaamya” attempts to draw parallels between the experiences of present-day communities of color with those expressed by Nazrul Islam back in the early 20th century when the British still ruled over India. Using a clever mix of dance, music and spoken word poetry, it juxtaposes past and present fights for racial, cultural and gender equity,” according to a KDT press release. The performance seamlessly blends the various cultural and thematic ideas at play into a cohesive dance piece incorporating traditional Kathak idioms.

“Shaamya” will be set to a live rendition of original compositions by musical legend JD Steele, with whom KDT previously collaborated back in 2013 on the critically acclaimed “Karna –The Abandoned Hero.” Steele, an accomplished musician who has performed with THE Prince, Mavis Staples and others, will be accompanied by two of his siblings, pianist Billy Steele and vocalist Jevetta Steele, as well as drum artist Abhinav Sharma.

Steele’s compositions include elements of North Indian, East African and African American musical styles. They were also inspired by taals, which are rhythm cycles used in North Indian classical music and dance. “Shaamya” will also include written contributions by Somali poet and playwright Ifrah Mansour, who will perform the poem “I am a Refugee” onstage alongside the dancers and musicians. Mansour is perhaps best known for her autobiographical play “How to Have Fun in a Civil War,” which details her memories of her childhood in war-torn Somalia. In addition to KDT’s ensemble, contributions from dancers of multiethnic backgrounds will fill out the show, including ballet, flamenco, rap and hip-hop.

Incorporating cross-cultural artistic and narrative elements within a classical Indian dance performance is in keeping with Rita Mustaphi’s mission to expand upon the Kathak tradition while preserving its authenticity and cultural integrity. I have known Rita di, as we fondly call her, for over 18 years (full disclosure I am a part of KDT Board of Directors) and Kalyan Mustaphi or dada to us all. The husband-wife duo is one of the finest human beings you can befriend as well as the keepers of the artistic light that keeps burning at KDT. Founded by Rita di in 1987, KDT’s performances and collaborations over the years reflect multicultural experiences and artistic influences, expanding and diversifying the form while preserving its authenticity and cultural integrity. In addition to performing, KDT’s company members instruct at KDT’s school of Kathak dance and engage in regular community outreach activities in order to ensure that Kathak is both accessible and relevant throughout Minnesota.

“Shaamya” is just one in a long line of original works choreographed by Mustaphi. She has three McKnight Fellowships for choreography under her belt, a 2011 Lifetime Achievement award from the India Association of Minnesota, a 2012 Education award from the Ordway Center for the Performing Arts, and a 2021 Nari Shakti Award for Women’s Empowerment from the Indian Council of Cultural Relations.

Born and raised in Kolkata, Mustaphi graduated from the University of Calcutta with a major in physiology and Rabindra Bharati University with a major in dance. Later, she became a disciple of Pandit Vijai Shankar (Kolkata) and finally studied under the tutelage of Pandit Birju Maharaj (Delhi), the legendary master of Kathak dance. She recalls, “They taught me to love dance as though it were human and to feel its all-encompassing beauty.”

Pakistani American Sentenced to Over 5 Years in Prison for Fraudulently Obtaining PPP Loan of $5.6 Million

Mustaphi strives to create works that provoke emotions, stimulate the senses and activate the mind. She began teaching in the Twin Cities in 1978 and in 1987, she realized her dream of creating a professional company and school of Kathak dance—Katha Dance Theatre. KDT is Minnesota’s first Asian Indian dance company as well as one of only 12 professional Kathak companies in the U.S. In over 30 years, Mustaphi has choreographed more than 50 evening-length works that have been performed locally, nationally and internationally.

Notably, she has performed at New York’s Carnegie Hall, at the prestigious Khajuraho Dance Festival in Madhya Pradesh, India, and in various venues around New Delhi. Her selected choreographic credits include “Sufiana – the Sufi Ecstasy” (2016), a collaboration with Dr. Pooja Goswami Pavan; the Kathak & Chhau dance collaboration “Pourush – The Masculine” (2015); “Karna – the Abandoned Hero” (2013) in collaboration with J.D. Steele; and “EKAM–The Supreme Oneness” (2011) in collaboration with Robert Robinson. Her works have been set to everything, from Persian music to traditionally American jazz, gospel, and R&B.

Kuhu Singh lives in Eden Prairie, Minn., a suburb of the Twin Cities. Bidding adieu to journalism a decade ago, she nonetheless loves to write and express her very strong opinions on social media and blogs and sometimes in a few Indian publications. She is a Senior Digital Marketing Manager for a broadcast retail company. Race relations, diversity, social issues fascinate and roil her into action. She volunteers her time with certain political organizations and community organizations.