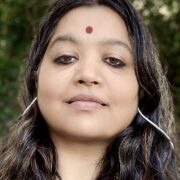 Beyond Biometrics: The Struggle for H-4 Dependent Visa Renewals During the Pandemic

Everyone wants to associate with a winner.

And so when soft dinner conversation murmurs and intense zoom conversations about an interesting candidate from California slowly spilled over into the public domain rising to a roaring crescendo of cheer for an actual Veep nomination … Some of us with roots in the Indian subcontinent immediately got down to business and started doing what we do really well – we initiated complex  data analytics and statistical calculations on her chances, reviewed positive planetary astrology predictions … and essentially began making a winding, elaborate rangoli kolam design.

In other words, we started doing our best to “connect the dots” to understand better and align ourselves with the powerful rising new star on the horizon, Vice Presidential candidate Kamala Harris.

The forehead bindi dot was already a known connection with her because of Kamala’s half Indian lineage, so there was no need to try too hard there … but I digress, let me start at the very beginning. Starting with what I personally began to see in common with Kamala other than simply co existing on the human plane with the substratum of the same spark of divinity within.

Right off the bat there is her name.

If one does some semantic gymnastics her surname Harris closely resembles “Harri’s” or Hari’s meaning “belonging to the form of the God Vishnu.” So with some nifty extrapolation and expansion, Hari’s Kamala Devi = Vishnu’s Lotus Goddess aka Kamala Devi Harris.

And there you have it.

Kamala Harris in her modern avatar seems to already check some of the attribute boxes of the goddess she was named after just going by her vivacious, positive energy in public appearances and when we fact check her record. There is an old Indian saying that with effort we can grow into the seed names we are named for. So, there is that to consider.

Don’t be too quick to dismiss this as a great election strategy and deciding factor among the diaspora.

Admittedly the name Kamala also carries the risk of turning off those who are rabidly anti-Hindu for no reason. But that’s where the fact of Kamala’s mixed parentage and religious affiliation comes in to save her from the fanatics — from any side.

In truth, Sanatana dharma or the religion of practicing eternal values also known as Hinduism firmly embraces the cosmic world view that all is one and one is all and that while names and forms appear as many, the reality is one undivided unity.

What I am saying is finding oneness connectivity is firmly hard wired in the Indian spiritual psyche. So, my exercise to claim a cozy Kamala link is not frivolous fantasy, it’s just DNA speaking.

Now that that’s out of the way, let’s continue.

Five years after Kamala Devi was born in the U.S., across the world in India, on a scorching summer afternoon in Chennai, my parents named their daughter, aka little newborn me, Hema … after the very same goddess of prosperity and good fortune Lakshmi. So, the bond between us, Kamala and me had been firmly established at the get go, and at the very highest heavenly level, no less.

Kamala’s mom was from Chennai. My mom was raised in the city, too, and I was born there.

Kamala and I both were born into the much loved or maligned, depending on which side of the aisle one is, “Tambram” community and I do believe we both like idlis and dosas based on some interview clips of hers I’ve seen.

But wait, there is more.

I have literally walked hundreds of times in the Besant Nagar neighborhood by the very beach where her grandpa lived. Who knows … maybe we even passed each other when she was visiting him, she in her pigtails sucking on an ice lolly, me, five years younger, tripping along, a toddler in a ponytail, eyeing the street balloon seller’s wares by the humid, breezy Chennai beach shores and watching her while she was holding her grandpa’s hand as he was walking with her, engaged in heated political discussions with his buddies .

And then there is this. Kamala and I have a shared link with the diplomatic connection too. She, through her grandpa, and me, through my dad, who was on diplomatic posting when I accompanied him and my mom out of India to South America to a place called British Guyana which is geographically close to Jamaica and other islands of the Caribbean even though it is located on the continental South American mainland.

And who is from Jamaica? Bingo, Donald Harris, Kamala’s dad.

Starting to see a pattern emerge yet?

And of all the places in the world I could have lived, where did I end up moving to in the early nineties after living in South America and then the Middle East but Los Angeles, a few hundred miles south of where Kamala Harris lived in NorCal.

Now, for the final prize jackpot: where did Kamala’s husband Doug Emhoff graduate with his law degree – yup, it is the very same alma mater both my daughter and son graduated from — University of Southern California. Go Trojans.

Convince me this is all just chance.

As the bonus round, one more factoid. A friend and an acquaintance of mine are apparently both involved in her current campaign.

Coincidence…? I think not.

However hilarious and eye-roll worthy all this may seem, one thing is for sure.

I see my own fierce sense of fairness, honesty, ethics, compassion and justice as a freelance journalist and as a Clinical Ayurveda Practitioner reflected in my soul sister Kamala in her sincere promise to do what is best for the good of society and humanity.

I really do believe when I look into her eyes on TV that she is serious about what she says, and her words are backed by the capability to come through and deliver based on her career history.

A part of me knows in all likelihood if it hasn’t already been done yet, that somewhere out there, there is probably a Caribbean writer making his or her own diagrammatic graph to claim an equally strong bond with her like I have … and that’s perfectly ok.

I am happy to share my Kamala akka (big sis) with all who find her as charismatic, powerful and just downright real and likeable as I do.

Come November, Americans of all colors including us Indian Americans, will come out of Covid-weary stupor into sharp voting mode. For those brief moments, as we exercise our democratic right to make our voices count, we will hopefully vote with intelligence and heart, filled with optimism, for the beautiful goddess of prosperity and good fortune and her Presidential partner, a man of wisdom,and experience with a proven track record.

Or … there is the alternative to continue what we have already seen a 4-year long preview sample of. The longest 4 years of many of our lives no doubt for numerous reasons.

The stakes are high. May truth and goodness win.

God… and Goddess bless us all.

Hema Ravikumar is a Clinical Ayurveda Practitioner, also Yoga trainer, a meditation coach, wellness counselor, freelance writer and journalist based in the Los Angeles area. In a career spanning over three decades, she has been a full time and freelance journalist working in print and other electronic media, reporting on politics, business, entertainment, and contributing advertising copywriting for leading international agencies. Hema has also worked in a volunteer capacity in the community service development for the Office of the Mayor of Los Angeles. She continues to be an active service volunteer and resource person with nonprofit organizations and societal welfare causes she believes in. She is the Editor of World Ayurveda & Yoga Times, an online wellness news info distribution Facebook page and portal.