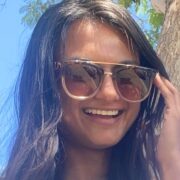 The stature of Kamala Harris never felt more real than during her introductory montage at the Democratic National Convention. Embraced by women, Americans from all walks of life, and the LGBTQIA+ community, Harris has a unique way of resonating with diverse communities. In spite of the outcry of support she received, I was not a fan of Harris. What was I missing that all these people saw in her?

As a vocal participant in protests this year, seeing images of the extraordinary women who struggled for change, marched to have their voices heard, and ran for office culminate in a woman of color accepting the nomination to be the next Vice President of the United States — and on the centennial of the passage of the 19th Amendment — hit home. I was witnessing a moment in history, and despite any misgivings it was undeniable that Kamala looked and sounded like me more than any other person who has ever been on a presidential ticket.

Raised by a proud South Indian mother, Kamala Harris learned to be family first. Her mother pushed her to “see a world beyond ourselves” and those words reflect the quintessential American Dream — doing something you never thought you could do. The heartbreak that her mother was not there to witness history as her daughter took the stage resonated with me. I can’t imagine what my father would think had he lived to see this. As the first of his family to immigrate to the United States from India, I know he’d be emotional over this historic moment. South Asian children grow up with ambition to reach a certain level of success to make their families proud. Kamala Devi Harris on the podium for the Democratic National Convention represents this feeling for all of us.

Sadly, the opportunity of the “American Dream” is no longer available as most American’s are struggling with unemployment, Covid-19 fears, and an uncertain future.

As a South Asian female, when I see Kamala on the podium as our Vice Presidential candidate, I want to believe she is a beacon of change for our nation. And tonight I started to believe. As a California resident I was not a fan of Harris. Her position as Attorney General was not favorable and could yield comparisons to Jackie Lacey (first African-American female District Attorney for Los Angeles). Both have a reputation for being extra tough on minorities. However, getting to know Kamala deeper, I’ve learned she has a bigger outlook and has evolved from this reputation as a tough prosecutor. The skills she has in arguing and pushing for change are undeniable, and if she is going to fight for healthcare for all, the Green New Deal, then we have an amazing advocate in our corner.

Like President Obama said tonight, “democracy is messy, frustrating but it is ours and we need to be a part of it.”

Kamala Harris represents a new change for our nation. Like us, she is an imperfect human, but most importantly: she is ours. We can push her to do better because she is willing and able to — unlike Trump who doesn’t care for the average citizen or democracy at all.

Like My Family, the Biden-Harris Ticket Represents the Unlikely Story That is America

Kamala is a fighter, Americans are fighters, and I am a fighter. I, along with my community optimistically hope to see real change this November.

A marketing and communications leader, Ami Gan has over 15 years of experience leading strategies for global brands and startups including Red Bull Media House and unicorn startup Quest. Ami was instrumental in the launch of America’s first Cannabis Cafe and behind its spotlight in the media. She currently resides in West Hollywood, CA with her rescue pup and quarantine buddy Foxx.

O Palestine! An Indian American’s Account of the Horrors of Israeli Occupation of the West Bank

All in it Together: Our Love of Political Engagement Made Us an Unusual South Asian American Family

‘Skinny Girl With a Funny Name’? Kamala is Not the Only Indian Name That Gets Mangled

23-year-old Indian American Woman Took a Nap After Throwing Newborn Out of the Window: NYPD

Hurts To Be Alone: Norah Jones Alludes to Life and Love in the Time of Pandemic